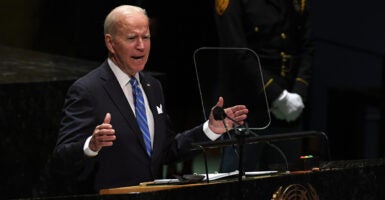 President Joe Biden addresses the 76th session of the U.N. General Assembly on Tuesday at U.N. headquarters in New York City. What Biden’s speech lacked was context on how America is actually leading. Among the more shocking statements, in the wake of his catastrophe in Afghanistan, was his declaration that America "stands up for allies and friends." (Photo: Timothy Clary/Getty Images)

President Joe Biden gave a speech to the U.N. General Assembly on Tuesday that was guaranteed to delight any globalist.

Suffused with promises of multinational cooperation, it addressed all of the standard progressive pet projects, from climate change to global equity, universal labor, and environmental standards. He even promised to “build back the world better,” and open up the American ATM for more foreign assistance for everybody.

What Biden’s speech lacked was context on how America is actually leading. Among the more shocking statements, in the wake of his catastrophe in Afghanistan, was his declaration that America “stands up for allies and friends.”

Coming right after his administration abandoned 38 million Afghans to the mercies of the radical Taliban—who has already started beheading children and torturing journalists—this was borderline laughable.

Biden actually bragged that the U.S. is “better equipped to detect” and take out terrorists today—this on the heels of a drone strike in Afghanistan where all he managed to accomplish was killing 10 civilians.

The president reaffirmed America’s commitment to the “rights of women and girls” around the world. Never mind that their future in Afghanistan, because of his actions, looks bleaker than ever, as 20 years of possibly the most dramatic advances anywhere in the Islamic world are erased.

Adding inept to obtuse, Biden promised to hold the Taliban accountable for the future of Afghanistan. Considering U.S. policy is to engage, enable, and empower the group as it tightens its grip on Afghan society, this claim rang hollow, to say the least.

How feckless does it look when Biden talks about taming the Taliban the day after it rounds out its all-male interim government, including known terrorists wanted by the FBI?

Biden’s folly didn’t end with clueless references to Afghanistan, sadly. He had the gall to talk about democracy for Cuba only weeks after abandoning the protesters, opting instead for policies that shore up the stability of its authoritarian regime.

He declared he would help bring peace and democratic values to places like war-torn Yemen and Ethiopia, both examples of countries where Biden’s policies have so far only managed to make things worse.

He ignored the situation in Texas, where thousands of illegal immigrants—stranded in a squalid, makeshift camp that would make the worst refugee camps in the world look like a weekend in Cabo—have been scrambling to exploit the mayhem he created at the border.

Biden also promised to open up America’s checkbook. Never mind that no one knows where all the cash will come from. This, after all, is a president who wants to saddle the U.S. with a debt so unprecedented it is only a good deal to our global competitors such as China.

Further, Biden’s metric of success appears to be foreign aid; namely, how much the U.S. spends, not how much we accomplish. He bemoans the billions spent in Afghanistan as wasted, but if it’s Biden wasting billions for feel-good causes … well, that’s OK.

Finally, Biden trumpeted all he’ll do with diplomacy, glossing over how the French just pulled their diplomat from the U.S. over—wait for it—a failure of diplomacy.

This speech no doubt warmed the heart of every bureaucrat at the U.N., but whether it actually impressed any of America’s friends or enemies is a real question. No matter what they might say in public to avoid offending an American president, in practice it is the reality of what we do, not what we say, that matters to them.

No one expects Biden to apologize for the global mayhem he has wrought to date, but his speech would have better spent on how the U.S. could address real issues going forward, like the abuse of international institutions, the reemergence of global terrorism, or realistic plans for the challenge of China, Iran, North Korea, or Russia.