Biden’s Refugee Policy Will Serve the Interests of the United Nations, Not America 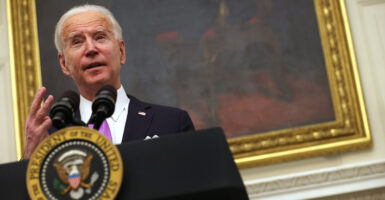 One of Biden’s stated priorities has been a restoration of the pre-Trump U.S.-U.N. relationship. That would be the same relationship where the U.S. foots most of the massive bill for—and suffers the consequences of—U.N. initiatives on things like resettlement of the world’s refugees. (Photo: Alex Wong/Getty Images)

Brian Lonergan is director of communications at the Immigration Reform Law Institute, a public interest law firm working to defend the rights and interests of the American people from the negative effects of mass migration.

It does not take a political science degree to know that with Joe Biden as the 46th president of the United States, things will be very different from the last four years.

Much of what the Trump administration had done in tax, energy, health care, and immigration policy, as well as how former President Donald Trump related to the United Nations, are likely to be reversed.

What many do not know is that what the nascent Biden administration is already doing on immigration is far more than just undoing what Trump did. It is embracing and implementing the United Nations’ global view of what our immigration laws should look like.

One of Biden’s stated priorities has been a restoration of the pre-Trump U.S.-U.N. relationship. That would be the same relationship where the U.S. foots most of the massive bill for—and suffers the consequences of—U.N. initiatives on things like resettlement of the world’s refugees.

After the presidential election last November, one of Biden’s first meetings was with U.N. Secretary-General Antonio Guterres, where they discussed a new era of cooperation.

“What’s wrong with that?” you may ask. Isn’t the U.N. a force for good in the world? That may have been true long ago, but today’s U.N. agenda, particularly regarding mass migration, seeks harmful mandates and policies that would supersede U.S. law.

The United Nations High Commission for Refugees has demanded that the United States broaden its definition of refugee, to essentially open its southern border to meritless asylum-seekers.

Among its many activities, the High Commission for Refugees has provided support and assistance to the large-scale migrant caravans from Central America that demanded entry into the U.S.

Under the guise of providing humanitarian aid, the High Commission for Refugees has dispatched more than 45 staff members to Mexico to ensure that the United States accepts the throngs of asylum-seekers making their way to our southern border.

With the Biden White House pushing amnesty policies, the result will undoubtedly be a spike in more massive caravans that flooded the southern border in recent years. As Biden looks to burnish his relationship with the U.N., there is no reason to believe he will act to stop these caravans from entering, along with all the chaos it will create in U.S. communities.

As further evidence of Biden’s commitment to this path, he is actually hiring U.N. staff to serve in his administration. The Biden team announced that Katie Tobin would be joining the administration as senior director for transborder security on the National Security Council.

In the world of Washington bureaucracy, it is known that Tobin’s new position has long prioritized border security, as the job title indicates. By putting a U.N. refugee activist in the position, the Biden White House has made it clear that it will work to serve the needs of refugee activists, not the security of America’s borders

Lost in the media’s and the Washington establishment’s adoration for the budding Biden-U.N. romance is any mention of the citizens of the U.S. and the security of their nation. Who is looking out for them?

How, in a COVID-ravaged economy, will an influx of millions of foreign nationals affect already grim job prospects for those citizens? How many scarce American resources will be spent to accommodate this massive refugee spike when they could be used on relief for desperate Americans?

Don’t hold your breath waiting for answers to those questions, as we will likely get none. We will only get to live with the consequences, and the realization that our interests are apparently at the bottom of this new administration’s priority list.