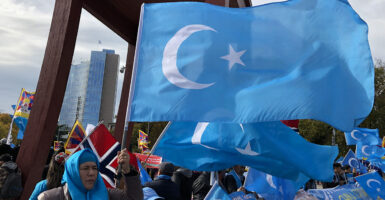 The United Nations Human Rights Council has exhibited anti-Israel bias and has been hamstrung by human rights violators like China that routinely win election to the body and use their positions to block criticism of themselves and other governments that abuse their citizens. Pictured: Uighurs and Tibetan people demonstrate against China outside of the United Nations offices in Geneva, Switzerland, during the Universal Periodic Review of China by the Human Rights Council, Nov. 6, 2018. (Photo: Bayram Altug/Anadolu Agency/Getty Images)

For decades, the United States has participated in, funded, and influenced the policies and decisions of dozens of international organizations to promote U.S. interests. Many of these organizations are useful (although many also have flaws that require correcting).

Some international organizations, however, are functionally unimportant or advance counterproductive policies and therefore do not merit U.S. membership, participation, or funding.

In short, each international organization has its own virtues and problems and contributes differently to U.S. strategic, economic, and political interests.

The U.S. should participate where membership benefits U.S. interests, cease participation when the costs outweigh the benefits, and always press for reforms to improve performance, efficiency, and accountability.

The Trump administration has incorporated this approach into its foreign policy. As noted by the 2017 National Security Strategy:

Authoritarian actors have long recognized the power of multilateral bodies and have used them to advance their interests and limit the freedom of their own citizens. If the United States cedes leadership of these bodies to adversaries, opportunities to shape developments that are positive for the United States will be lost.

All institutions are not equal, however. The United States will prioritize its efforts in those organizations that serve American interests, to ensure that they are strengthened and supportive of the United States, our allies, and our partners.

The Trump administration has embraced this strategy and has ended U.S. support for a number of flawed or harmful treaties and organizations while continuing U.S. leadership in those deemed useful in advancing American interests. For instance:

The administration also withdrew from the U.N. Educational, Scientific and Cultural Organization in December 2018 and the U.N. Human Rights Council in June 2018. Both organizations are seriously flawed.

The U.N. Educational, Scientific and Cultural Organization granted full membership to the Palestinians in 2011, requiring a congressionally mandated cutoff of U.S. funding.

The Human Rights Council likewise has exhibited anti-Israel bias and has been hamstrung by human rights violators like China that routinely win election to the body and use their positions to block criticism of themselves and other governments that abuse their citizens.

In addition, the administration:

Congress has been less active. Principally, Congress has focused on appropriating funds and continuing a number of legislative requirements for reports on contributions to international organizations and U.N. voting and for certification by the secretary of state that various policies, such as whistleblower protections and measures to prevent sexual exploitation and abuse by U.N. peacekeepers, are in place and enforced.

Notably, however, it has not supported the Trump administration’s budget requests to reduce funding for U.N. organizations and has maintained funding levels in recent years.

With respect to international financial organizations, the administration has strongly criticized the World Trade Organization in particular as part of its trade dispute with China.

In an effort to spur reform, the administration has withheld approval of replacement jurists for the World Trade Organization’s appellate body, a move that is likely to bring the organization’s enforcement activities to a standstill.

The administration has been less critical of the two most important international financial institutions, the International Monetary Fund and the World Bank.

The abandonment of that framework in 2010 at the beginning of the Greek debt crisis cleared the way for a fresh round of questionable loans that bolstered European banks but left Greece even more in debt and still in need of debt restructuring and fundamental economic and political reforms.

The administration has also been a supporter of the World Bank. Even before securing support for the new World Bank president, American David Malpass, the U.S. supported a large capital increase and secured support for a Women’s Entrepreneurs Finance Initiative.