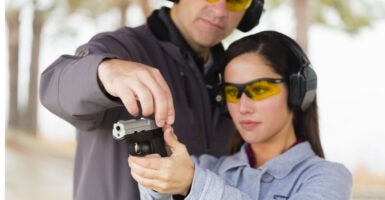 The reality is that the right to keep and bear arms is vital in a free republic where the government can’t or won’t always be there to enforce citizens’ individual rights against criminals. (Photo: RichLegg/Getty Images)

Biden’s move came after months of bipartisan concern over Chipman’s advocacy of severely restrictive gun control measures, his controversial statements appearing to mock new gun owners, and allegations of racist conduct during his time as an ATF agent.

Many gun control advocacy groups lamented Biden’s decision, but the withdrawal of Chipman’s nomination is a big step toward ensuring that the Second Amendment is protected from anti-gun bureaucrats who treat it as an antiquated, second-class right.

The reality is that the right to keep and bear arms is vital in a free republic where the government can’t or won’t always be there to enforce citizens’ individual rights against criminals.

Almost every major study on the issue has found that Americans use their firearms in self-defense between 500,000 and 3 million times a year, according to a 2013 report by the Centers for Disease Control and Prevention.

For this reason, The Daily Signal each month publishes an article highlighting some of the previous month’s many news stories on defensive gun use that you may have missed—or that might not have made it to the national spotlight in the first place. (Read accounts here from 2019, 2020, and so far this year.)

Government officials—especially unelected, unaccountable bureaucrats—ought not to be in the business of restricting Americans’ enumerated rights and mocking those who choose to exercise those rights for the first time.

Broadly imposed and highly restrictive gun control measures such as those supported by Chipman would not make a single innocent person in the circumstances above any safer from violent threats to their lives and liberties.

But Chipman’s preferred policies and government-sanctioned scorn for their gun ownership may well have acted as barriers to the one thing that actually kept them safe—the lawful exercise of their Second Amendment rights.