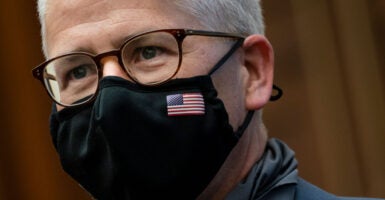 “Since it appears our bill won’t get a fair shake in this committee, this morning I filed a discharge petition for the Renter Protection Act,” House Financial Services Ranking Member Patrick McHenry, R-N.C., said Friday. Pictured: McHenry arrives for a committee hearing on Capitol Hill July 30, 2020, in Washington, D.C. (Photo: Drew Angerer/Getty Images)

Republicans on the House Financial Services Committee filed a discharge petition in an attempt to force a floor vote on a bill they said would help distribute rental assistance to low-income renters quicker.

Rep. Patrick McHenry, R-N.C., ranking member of the committee, said Democrats forced the hand of Republicans who first introduced the legislation, the Renter Protection Act, in June. Chairwoman Maxine Waters, D-Calif., hasn’t pushed the committee to consider the bill, which is supported by every Financial Services Committee Republican.

A discharge petition is a legislative maneuver that enables a minority party in the House to bypass committee approval and force a floor vote on a piece of legislation. The petition requires signatures from a majority, or 218, of representatives to be successful.

“This whole process has been unacceptable,” McHenry said during a committee hearing Friday. “It has been two months since the federal eviction moratorium expired and several weeks since the Supreme Court struck down President [Joe] Biden’s last-minute extension. Here we are again, asking, why isn’t the program working, and how can we fix it?”

“Since it appears our bill won’t get a fair shake in this committee, this morning I filed a discharge petition for the Renter Protection Act,” he continued. “I would encourage every member to sign on.”

Late last month, the Supreme Court blocked the Biden administration’s eviction moratorium, which was extended to October weeks earlier. But the Treasury Department and state governments have distributed just a fraction of the more than $46 billion in Emergency Rental Assistance Congress appropriated in December and March.

The government’s failure to efficiently disburse funds to low-income tenants who fell behind on rental payments during the pandemic coupled with the Supreme Court decision potentially exposed millions of Americans to immediate eviction.

“Congress promised relief to renters and property owners impacted by the pandemic,” McHenry said in a statement Friday. “Due to the Biden Administration’s mismanagement and Congressional Democrats’ inaction, American families have been left twisting in the wind.”

“Republicans have been offering a commonsense solution for months—the Renter Protection Act—to fix the [Emergency Rental Assistance] programs, make mom-and-pop property owners whole, and end the threat of eviction,” the North Carolina Republican said. “This discharge petition will force Congress to finally keep the promise we made to renters and property owners almost one year ago.”

A spokesperson for McHenry said Republicans haven’t yet reached 218 signatures, but expect to get more once the House is back in session.