An Example of How Transgender Rights Affect Women’s Safety 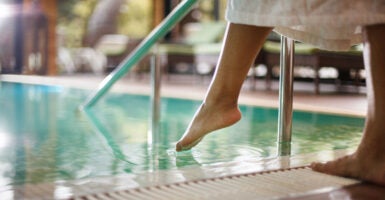 “It’s OK for a man to go into the women’s section, show his penis around the other women, young little girls underage, your spa, Wi Spa, condones that, is that what you’re saying?” said a woman in a viral video at Wi Spa. (Photo: Getty Images)

In June, Instagram user “CubanaAngel” posted a video featuring a woman demanding of an employee at Wi Spa in Los Angeles why a man was being allowed in the women’s area.

“It’s OK for a man to go into the women’s section, show his penis around the other women, young little girls underage, your spa, Wi Spa, condones that, is that what you’re saying?”

The video went viral, and heated protests featuring people on both sides ensued. The Los Angeles Times reported that Wi Spa said “they are required to follow California law that prohibits businesses from discriminating against customers based on race, gender, sexual identity or expression.”

Meanwhile, some outlets questioned whether the incident had even occurred. The Washington Post reported, “It is unclear whether a transgender woman actually used the spa. The person has not been publicly identified.”  Slate headlined an article, “Violence Over an Alleged Transphobic Hoax Shows the Danger of Underestimating Anti-Trans Hate.”

But now we’re learning the incident did happen—and a person who identifies as transgender has been charged.

“Charges of indecent exposure were discreetly filed against a serial sex offender for the Wi Spa incident, following an investigation by the Los Angeles Police Department,” reports Andy Ngo for the New York Post. “Sources with knowledge of the case but not authorized to speak publicly say four women and a minor girl came forward to allege that Darren Agee Merager was partially erect in the women’s section of Wi Spa.”

Merager, meanwhile, “denies ever being erect or around children at the spa. [Merager] says [Merager] is actually the victim of sexual harassment by transphobic women at the Wi Spa,” the Post reports.

But this is not the first brush with sexual harassment charges for the “legally female” Merager, per what Merager told the Post, which also reported, “Law-enforcement sources revealed that Merager is a tier-one registered sex offender with two prior convictions of indecent exposure stemming from incidents in 2002 and 2003 in California.  … In 2008, [Merager] was convicted for failing to register as a sex offender.”

For years, conservatives have warned that these so-called anti-discrimination measures, which can lead to giving people access to bathrooms, locker rooms, and other private spaces on the basis of their gender identity, not biological sex, would allow sexual predators access to women’s spaces.

Across the country, women are being affected right now by transgender rights. Student female athletes are losing to biological males. Women in California prisons are facing the reality that biological men who now identify as women may be transferred to their single-sex units. High school girls are having to share locker rooms with biological males.

As a 15-year-old girl told The Daily Signal in 2015 when a biologically male student started using the girls locker room: “I don’t feel right changing in the same room as a transgender student. The locker room is already filled with so much judgment, and I barely feel OK changing in front of my naturally born girl peers.”

Solutions are out there that could accommodate both transgender people and keep women’s spaces safe, such as single-stall bathrooms that are gender-neutral. Yet unfortunately, instead of working on solutions like this, the default seems to be letting transgender rights trample women’s rights.

Let’s hope this incident in California isn’t a harbinger of a new normal.