Disrespecting others is what Antifa, Black Lives Matter, and virtually everyone else on the left is doing now at a level unknown since the Weimar Republic. Pictured: Santa Monica, California, in May 2020. (Photo: Warrick Page/Getty Images) 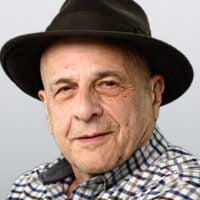 When I saw a video online of Antifa attacking demonstrators in front of the Wi Spa in Los Angeles’ Koreatown, I realized why, to quote the immortal words and title of Thomas Wolfe’s 1940 novel, “You Can’t Go Home Again.”

But unlike Wolfe, who, in his famous novel, was loath to return to his native Asheville, North Carolina, I am in the South, resistant to returning to California where I lived most of my adult life.

It was the homeless coming down in the morning from Mulholland Drive on the way to free food and not-so-free drugs—making even walking the dog a perilous activity—that had initially propelled our family out, at least in part.

But things have apparently only gotten worse since then, considering what transpired at Wi Spa. That was a place I knew because, in the ‘80s and ‘90s and into the first few years of this century, I had become an occasional habitué of LA’s Korean spas, excellent places to relax in the hot water, although I can only recall patronizing Wi Spa once.

Nothing happened there then remotely like what occurred the other day—a man walking buck-naked into the women-only side, declaring his “gender identity” female, while not bothering to hide the contrary evidence in front of the assembled biological women and their children.

Later, a black woman expressed her justifiable anger at this display before management only to be herself confronted by a particularly obnoxious “woke” individual defending the right of the gender dysphoric to freak out kids. (This is also on video at the link if you have not seen it.)

The next chapter had defenders of traditional human privacy (aka “normals,” as my friend Kurt Schlichter calls them) protesting in front of Wi Spa. Violent Antifa psychos, who are apparently immune to any kind of serious prosecution by the district attorneys of Los Angeles, Portland, and Seattle or, for that matter, our Department of Justice, confronted them.

What are we to make of this other than it is all-too predictable by now?

America—in its blue states at least, and they are doing their best to spread the poison elsewhere—has turned into a land of the “woke” where near-total conformity rules the day. The populace is terrified to speak up against the real intention behind this basic Marxist behavior—the destruction of the family as we know it.

When you look at the silent faces standing in the lobby of the Wi Spa while the “woke” spokesman pontificates, you see this fear and all you can say is, “Welcome to Weimar Los Angeles.”

Indeed, the direction of our republic is eerily similar to Weimar, Germany, in everything from social mores to inflation.

One of the more interesting books that gives a sense of what it was like then is—doubly apropos since we are in the middle of Wimbledon—“A Terrible Splendor” about the epochal 1937 Davis Cup duel between America’s Don Budge and Germany’s Baron von Cramm—a handsome gay man who was under the thumb of the Gestapo at that time for his proclivities so that he would win against the Yankee.

Meanwhile, license prevailed for others in 1930s Berlin beyond anything we would even conceive of today.

What the self-described “progressives” of LA and elsewhere must learn is that this is not about whether you are pro- or anti-gay. There are plenty of gays on the right these days. Or how you feel about the transgendered. Personally, I’m live and let live.

It is about something much more basic we all learned in school when school really was school and not a Cultural Revolution indoctrination camp. I’m going to put it in caps, lest it be forgotten:

RESPECT THE RIGHTS OF OTHERS!

Disrespecting others is what Antifa, Black Lives Matter, and virtually everyone else on the left is doing now at a level unknown since the Weimar Republic. We all know how that ended.

This article was originally published in The Epoch Times.