30 Years Ago, the Berlin Wall Began to Crumble. Now, We Honor the Victims of Communism. 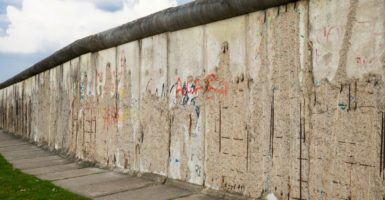 The Berlin Wall divided the city of Berlin for 28 years and become an iconic symbol of communist oppression. (Photo: iStock Photos)

A key element of the Reagan Doctrine that ended the Cold War was the delivery of the right speech at precisely the right time.

In June 1987, 30 years ago this month, President Ronald Reagan took his freedom offensive to Berlin where he directly challenged the Kremlin, proclaiming, “Mr. Gorbachev, tear down this wall!”

The president’s blunt words were a telling contrast to John F. Kennedy’s emotional declaration a quarter of a century earlier, “Ich bin ein Berliner,” which thrilled the people of West Berlin but was ignored by Soviet leaders who remembered Kennedy’s weak response in 1961 to the building of the Berlin Wall.

White House aide Peter Robinson, who drafted Reagan’s Berlin Wall speech, has recounted how the State Department and the National Security Council fought for weeks, right up to the day that the speech was delivered, to delete the words “tear down this wall!” on the grounds they were overly provocative.

When Robinson asked the president what he wanted to say to the German people “on the other side of the Berlin Wall,” Reagan replied, “That wall has to come down. That’s what I’d like to say.” And so he did.

Determined to keep up the pressure on the Soviets, Reagan traveled to Moscow the following spring for what biographer Lou Cannon described as his “premier” presidential performance as freedom’s advocate.

Beneath a gigantic white bust of Vladimir Lenin at Moscow State University, the president delivered an eloquent speech on the blessings of democracy, individual freedom, and free enterprise. He explained to an entranced audience of young Russians that “freedom is the right to question and change the established way of doing things.”

He lauded the “continuing revolution of the marketplace” and the right “to follow your dream or stick to your conscience, even if you’re the only one in a sea of doubters.”

Near the conclusion of his talk, Reagan quoted the poet Alexander Pushkin, beloved by Russians, “It’s time, my friend, it’s time.” It was clear he meant it was time for freedom in a nation that had suffered under the tyranny of Marxism-Leninism for 70 years.

Barely three years later, the Soviet Union was no more—an abandoned relic on the ash heap of history.

This Friday, on the 30th anniversary of Reagan’s Brandenburg Gate speech, the Victims of Communism Memorial Foundation will commemorate the anniversary of its memorial, the only memorial in the world dedicated to the more than 100 million victims of communism.

More than 20 ambassadors from around the world will attend and lay a wreath at a bronze replica of the Goddess of Democracy statue. The original was erected by pro-democracy Chinese students in Tiananmen Square in June 1989, then destroyed by Chinese Communist tanks and troops.

As foundation chairman, I will be privileged to say a few words, and I will quote what President George W. Bush said in 2007 when he accepted the memorial on behalf of the American people.

The men and women who designed this memorial could have chosen an image of repression for this space, a replica of the wall that once divided Berlin, or the frozen barracks of the Gulag, or a killing field littered with skulls. Instead they chose an image of hope, a woman holding a lamp of liberty …

Like our Statue of Liberty, she reminds us that the flame for freedom burns in every human heart, and it is a light that cannot be extinguished by the brutality of terrorists or tyrants.

Indeed it will prevail, and far sooner than the communist rulers of China, Cuba, North Korea, Vietnam, and Laos realize.