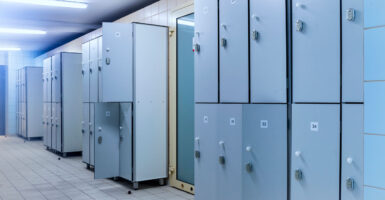 The transgender policy of Los Angeles’ Wi Spa allowed a man to expose himself in the women’s locker room. (Photo: ewg3D/Getty Images)

There was nothing relaxing about a trip to Los Angeles’ upscale Wi Spa on July 3. The ordinarily calm atmosphere was interrupted by a bitter protest over the shop’s transgender policy, which allowed a man to expose himself in the women’s locker room—to the shock and disgust of female clients.

In a video that exploded across social media, an irate customer demanded to know why it’s OK “for a man to go into the women’s section, show his penis around the other women, young little girls, underage. Your spa, Wi Spa, condones that? He is a man. He is not a woman.”

“There are girls down there,” the woman said angrily, “other women who are highly offended by what they just saw—and you did nothing. You sided with him.”

The employees on the desk said that they couldn’t discriminate against the man based on his “gender identity.” That infuriated other customers in the lobby—including one who can be heard demanding a refund, vowing never to return.

When the footage started getting hundreds of thousands of views, the spa released a statement, insisting its hands were tied by the state:

As a spa located in Los Angeles, Wi Spa complies with California law prohibiting discrimination by a business … Wi Spa strives to meet the needs and safety of all of its customers and does not tolerate harassment or lewd conduct by any customer, regardless of their sex, gender, or other characteristic.

You could’ve fooled the locals. To the people demonstrating in front of Wi Spa July 3, it looked exactly like the store was tolerating lewd conduct.

And yet, what started out as a peaceful protest over the store’s refusal to protect its customers turned ugly when counterprotesters, carrying rainbow flags and transgender signs, decided to get in the faces of concerned men and women. Suddenly, the chants of “save our children” were drowned out by a crazed mob that started setting fire to dumpsters and chasing opponents down the streets.

The chaos only escalated from there, as fights started breaking out up and down the sidewalk. At least one man wearing an “Obey Jesus” T-shirt stepped in to protect the women in his group and was punched in the head and back until the blood poured down his face. Others, wearing the tagline “Let’s talk about Jesus,” were pushed into the street while the mob threw water bottles at their heads.

By the time police arrived, things were so out of hand that they had to form a line and clear the area. At least one person was hospitalized, and another five crimes of assault and battery were reported, according to the Los Angeles police officers on the scene.

And this is the “progress” President Joe Biden wants to bring to every locker room in America? A wide-open door for men and boys to traumatize our daughters?

In the name of tolerance, he’s pushing schools to throw children’s privacy to the wind and cast their lot with radical transgender policies like this one. If that makes you or your child uncomfortable, this president’s response is “too bad.”

Even now, Biden’s Office of Civil Rights is making it clear that in cases like the Wi Spa, where a naked man walks around in front of children in the women’s locker room, he’s the one who could file a complaint for harassment. And this administration would side with him every time.

Of course, the other side will scream that this sort of incident is an anomaly. An outlier. But a representative of another local spa on Olympic Boulevard says this sort of problem has cropped up there, too.

A biological man who identified as a woman caused “an uproar” last year when he exposed himself in the female pools and lockers. “People began to feel uncomfortable,” the employee explained. “It became very disruptive.” According to the Los Angeles Times magazine, the management did confront him. His response? “He was adamant that the spa should ‘attempt to normalize young girls and women viewing male genitalia.'”

Unfortunately, Americans are living under an administration that agrees with him. And look at where that’s gotten us. Six months into Biden’s “unity” agenda, fights are breaking out from spas to school boards. If the president doesn’t step back and reconsider where his policies are taking this nation, these next three and a half years will test the endurance of the very fiber of our nation.