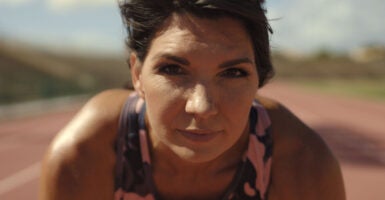 “As a coach and as a mother,” says Cynthia Monteleone, “seeing my daughter put in so many hours of hard work ... it was heartbreaking to see that she was running as fast as she could, and still, this athlete breezed right by her.” (Photo: Independent Women's Forum/QuickFrame)

For professional track athlete Cynthia Monteleone and her teenage daughter, the fight to protect women’s sports is something they know firsthand.

In separate events, both mother and daughter have raced against biological men. In Monteleone’s case, she beat her transgender competitor by a few tenths of a second.

But her daughter Margaret Oneal Monteleone, 16, a sophomore at a Catholic prep school in Maui, Hawaii, placed second behind her transgender competitor.

“As a coach and as a mother,” Monteleone says, “seeing my daughter put in so many hours of hard work and being restrictive in her eating—maybe passing on sweets and things like that to make sure that she was strong for her race—it was heartbreaking to see that she was running as fast as she could, and still, this athlete breezed right by her.”

That was Margaret’s last track competition of her freshman year at St. Anthony School—the COVID-19 pandemic canceled the rest.

“I would have won my first-ever high school track meet if it weren’t for this athlete,” Margaret says of her transgender competitor. “It was very disappointing.”

>>> Learn more about the Monteleones’ story:

Legislation has been filed in more than 30 state legislatures to protect girls and women’s sports as participation by transgender athletes grows, and at least seven states already have instituted such protections.

Monteleone, Margaret’s mother, is a World Masters Athletics track athlete who specializes in the 400-meter. She ran track in college before racing for the USA Track & Field Masters team, which offers local, regional, national, and international competitions in track and field for athletes 35 years and older.

Monteleone, 45, says she had thought she was done with her running career. But when Margaret asked her mother to train her in the 400-meter, she was inspired to compete again.

In 2018, Monteleone qualified for Team USA at the World Masters Athletics Championships in Málaga, Spain.

There, she faced off in the women’s category against Yanelle Del Mar Zape, a biological male from Colombia.

When Monteleone discovered she’d be racing against a biological male, she says, she raised concerns with USA Track and Field administrators.

“For your own safety, you might want to keep your mouth shut,” she recalls administrators telling her.

A USA Track and Field representative told The Daily Signal that the organization has “no knowledge and/or recollection” of that conversation.

In the end, Monteleone beat Zape by a hair to make it to the final round of her 200-meter race. “But just because I won doesn’t mean that this is not an issue,” she says.

At the April 2019 World Championship indoor meet in Torun, Poland,  Zape took home the bronze in the 80-meter hurdles, beating Monteleone’s teammate, who, she says, “trained harder than anyone I know in the hurdles.”

The spokesman for USA Track and Field also said that organization is “one of the most inclusive and diverse [national governing bodies] representing the Olympic movement, advocating for equal opportunity, access, and treatment for all individuals.”

A year and a half after that championship event, Monteleone’s daughter, Margaret, found herself in a similar position. At her first and last high school race of the season, she lined up against and came in second to a biological male in a 400-meter race.

The biological male injured a female volleyball player with a powerful spike shortly after transitioning, according to Ahlayn Labuanan, whose daughter Destiny was a member of the same team as the transgender athlete. The injured girl was diagnosed with a concussion, Labuanan adds, temporarily taking her out of school and practice.

On a separate occasion, Labuanan says, another girl on an opposing team was injured by the transgender athlete when she went to block a ball, got hit in the face by it, and fell to the ground.

The Daily Signal was unable to find contact information for the transgender athlete in order to ask for confirmation and comment on these incidents.

Darren Pai, director of strategic communications for Kamehameha Schools Maui, told The Daily Signal that the K-12 campus would have no comment for this report.

Although competitive fairness was an issue during volleyball season, the safety of female athletes most concerned parents, teammates, opponents, and coaches alike.

“Safety was definitely their utmost concern,” Labuanan says, “playing against a transgender [person] of that caliber.”

Once volleyball season ended and track began, the concern shifted to competitive fairness.

“It was very disappointing,” Margaret says of the race she lost to the transgender athlete, adding: “I’ve been training the entire year.”

By contrast, she says, she heard that the transgender athlete had “only been training about two weeks beforehand.”

Monteleone and her daughter chose to speak out about their firsthand experiences as Hawaii residents while policymakers across the nation debate the transgender sports issue.

Joseph Balangitao, executive director of the Maui Interscholastic League, in which Margaret competes, has said the league follows the lead of the Hawaii High School Athletics Association, which adopted a policy on transgender athletes in 2017.

That HHSAA policy states, in part, that “a student has the right to participate in athletics in a manner consistent with the sex listed on their school records.”

And in February, the Biden administration withdrew government support for a federal lawsuit in Connecticut brought by female athletes over a policy allowing biological males to compete in girls’ athletic events in high school. As a result of that policy, the girls argue, they were deprived of honors and opportunities to compete.

The International Olympic Committee took a controversial stand by allowing the first biological male to compete in an Olympic women’s event at the Tokyo Games this July.

That athlete, Laurel Hubbard, competed for New Zealand in men’s weightlifting for years before transitioning in 2013 and beginning to compete as a woman.

A recent study suggests biological men who identify as women have an athletic advantage over biological females even after a year on hormone therapy, NBC News reported. The results of the study, published in the British Journal of Sports Medicine, seem to challenge the adequacy of a one-year waiting period for Olympic athletes who are transitioning.

In addition to competing and training with her daughter, Monteleone is a metabolic health practitioner and coaches girls track—including middle school, high school, and elite—in Maui.

As some of her female athletes prepared to compete against a biological male, she says, they thought they had no chance of winning.

“The girls I coach were having major anxiety,” Monteleone says, adding:

One girl was a senior. This was going to be her last season of track and field, and because of COVID, it turned out to be her last race. She actually broke down and started crying. It wasn’t that she was feeling any kind of negative thoughts towards this individual. It was that she knew that all of the hard work and training that she put in would be incomparable to the biological advantage of this powerful athlete. …

This girl then told me she didn’t even want to run track for the rest of the season. ‘What was the point?’ she said. ‘I trained so hard for my events and I have no chance of winning the conference championship.’

Like her mother, Margaret is serious about her track career, saying she hopes to win state championships and go on to compete in college.

“I know that if a biological male competes,” Margaret says, “a scholarship may go to someone else.”

Critics of those who question such trends often downplay the growing presence of biological males in women’s sports, along with the implications for girls and women. But each instance of a transgender woman entering and affecting women’s competitions alters the rankings of athletes who were born female.

After all, it wasn’t just Margaret or Monteleone’s teammate in Poland who have lost to transgender athletes, but every other female competitor who got bumped down a spot by a biological male.

Monteleone predicts that many critics inevitably will label her perspective as “anti-transgender.” But “this is not accurate,” she says, adding:

It’s easy to place a label on someone, but to walk in their shoes is another story. Have they competed against someone who has a clear biological advantage? Have they trained hours and hours to have a chance for victory? … This is not about us. This is not about my story and [my daughter’s] story, it’s about the young girls that I coach in elementary school who see that hard work pays off.

Her daughter Margaret says she understands what other young women face in competing with biological males.

“I feel so sorry for every girl that has gone through this,” she says. “I know what it feels like because I’ve had to go through this experience as well.”

>>> This story was reported by Independent Women’s Forum. Visit  iwf.org/defendfemaleathletes to learn more.