Women ‘Will Be Losing Most,’ Former Afghan Ambassador to US Says of Taliban Takeover 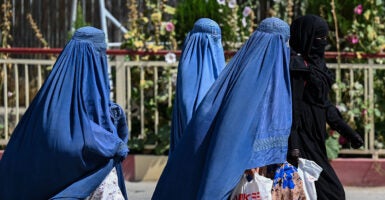 The Afghan people are now facing the prospect of life under an “authoritarian regime that is oppressive toward women,” former Afghanistan Ambassador to the U.S. Roya Rahmani says. Pictured: Afghan women walk near Wazir Akbar Khan Hospital in Kabul, Afghanistan, on Sept. 1. (Photo: Aamir Qureshi/AFP/Getty Images)

America’s longest war is over. But the chaotic U.S. withdrawal from Afghanistan has many Americans questioning the leadership of the Biden administration.

It’s estimated that between 100 and 200 Americans and thousands of our Afghan partners remain trapped inside Taliban-controlled Afghanistan. Although the Taliban claims it will respect the rights of women and girls, experts say the terrorist group hasn’t given Afghans any reason to believe it.

“It seems that the women will be those who will be losing the most, whether it is because of conflict or the authoritarian regime that is oppressive toward women,” says Roya Rahmani, the female former Afghan ambassador to the United States.

On Tuesday, Rahmani and Heela Najibullah, author of “Reconciliation and Social Healing in Afghanistan,” joined The Heritage Foundation for an event, “Grim Prospects for Women and Girls in Afghanistan.” We share their remarks on the podcast today.

Also on the show, we mark the start of the college and NFL football season by talking about the big games to watch this week. And Kanye West finally releases “Donda,” his new album. We break down some of the attendant controversy and how the record highlights West’s artistic talent.

And as always, we will crown our Problematic Women of the Week.

Plus, “Problematic Women” announces a new format. In addition to the Thursday show, which now will be solely discussion-based, we’ll release an exclusive interview every second and fourth Tuesday.