America Must Stand Up for Fundamental Rights of Afghan Women 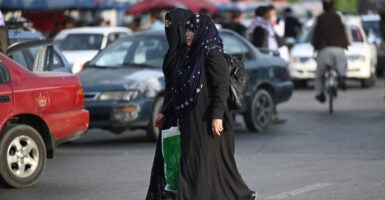 The successes achieved by Afghan women over the past 20 years are on the brink of being lost under Taliban rule. Pictured: Burqa-clad women cross a street Tuesday in Kabul, Afghanistan. (Photo: Aamir QUureshi/AFP/Getty Images)

With the world watching in horror, the hasty withdrawal of U.S. troops from Afghanistan resulted in the Taliban’s near complete control over Afghanistan’s population of 40 million.

The Taliban is a brutal, repressive, Islamist regime that almost certainly will perpetuate severe human rights abuses against the Afghan population, making its return to power particularly catastrophic for women.

This betrayal of the Afghan people—not to mention U.S. citizens and allies left behind—is especially harsh coming from the very leaders within the Biden administration who claim to be the ultimate champions of human rights.

Although President Joe Biden remarked in an Aug. 16 speech that “human rights must be the center of our foreign policy,” his promise rings hollow to the millions of Afghans who now are at the mercy of the Taliban to exercise their fundamental rights—to life, religious belief, conscience, and speech.

A Taliban official recently told Reuters that the new government structure will not be a democracy, but “will protect everyone’s rights.” But even these tepid assurances of a kinder and gentler Taliban government are made with the caveat that the Taliban’s version of Shariah law will be the ultimate framework.

When the Taliban was last in control of Afghanistan—from 1996 until 2001, when the U.S. defeated the terrorist organization following the Sept. 11 attacks—its implementation of Shariah law resulted in severe restrictions on religious, political, and social freedoms for the Afghan people.

If history is any guide, religious freedom will not exist under the Taliban’s rule—not for moderate Muslims, and certainly not for Afghanistan’s dwindling population of Christians and other minority faiths.

And as Nina Shea, director of the Hudson Institute’s Center for Religious Freedom, explains:

Denying religious freedom [means that] international rights to freedom of belief, expression, publication, association, assembly, movement, marriage, education, occupation, and other areas are to be circumscribed by the Taliban religious code.

Already we have seen many heartbreaking stories of families risking everything in desperate attempts to escape the Taliban, and of religious minorities, particularly Afghan Christians, trying to flee certain persecution by the Taliban by crossing into Iran and Pakistan.

The successes achieved by Afghan women over the past 20 years—attending school, graduating with advanced degrees, holding political office, pursuing careers, raising families, and living their lives in relative freedom—are now on the brink of being lost. The Taliban especially endangers women such as Zarifa Ghafari, the young mayor of Maidan Sharh, who have broken barriers and achieved things unimaginable 20 years ago.

Although the United Nations’ human rights mechanisms are notoriously imperfect and often ineffective, even Michelle Bachelet, the U.N. high commissioner for human rights, has warned that

[w]omen, minorities, human rights defenders, journalists as well as others who are particularly vulnerable need particular protection [from the Taliban]. There are very real risks of renewed atrocities against ethnic and religious minorities.

But the Biden administration appears to have been unprepared for a Taliban takeover of Afghanistan, and now is either incapable of or unwilling to mitigate the resulting human rights disaster. Although this administration repeatedly has claimed to have “planned for every contingency,” the realities we are seeing on the ground betray that claim.

It is a bitter and tragic irony that a liberal administration ever-interested in expanding the list of “human rights” thinks that doing so requires rejecting a framework that prioritizes protection of the most basic fundamental rights, such as religious freedom, ahead of positive rights created by the state.

Unfortunately, the “progressive” left sees promoting religious freedom as an impediment to advancing abortion, a top priority of the Biden administration both domestically and abroad.

The left’s deep-seated instinct to make abortion the central “women’s issue” has left it ill-prepared to protect and promote the fundamental rights—to life, religious belief, conscience, and speech—of Afghan women. Headlines show Afghan women seeking to exercise their fundamental rights; these women are not clamoring for abortion on demand.

The Taliban undoubtedly will commit severe human rights abuses against the Afghan people, particularly women. To potentially stop those abuses, Biden must commit his administration to championing fundamental human rights for all individuals on the basis of human dignity.

It’s time to get priorities straight.