For Brits, Biden’s Afghanistan Debacle Is a Betrayal 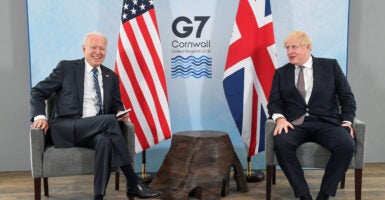 When President Joe Biden addressed the American people on the Afghanistan withdrawal last Friday, we were witnessing the death spiral of one of the most calamitous U.S. administrations of modern times.

This presidency is sinking faster than the Titanic, increasingly friendless on the world stage, and looking like easy prey to America’s enemies, from Beijing to Moscow.

Biden appeared confused, angry, incoherent, and clueless as he spoke from the White House. He is no John F. Kennedy, Ronald Reagan, or Franklin D. Roosevelt. His presidency is a disaster of epic proportions.

Not only was Biden defiant as he took questions from the media, he was also spreading the kind of disinformation that is unworthy of an American president. For example, he declared that America’s allies were not questioning the credibility of the U.S. over the Afghanistan debacle, and fully supported the decision to withdraw.

This is a flat-out lie. Indeed, deep-seated criticism of the Biden strategy has spread across Europe.

Some of the harshest words for the Biden administration have come from Berlin, where Armin Laschet, who has replaced Angela Merkel as the leader of Germany’s ruling Christian Democratic Union, referred to the American withdrawal as “the biggest debacle that NATO has suffered since its founding.”

Biden is clearly living in the Twilight Zone if he thinks that U.S. allies, from London to Warsaw, are not openly questioning the Biden administration’s credibility on the international stage.

This is a bitter, defiant, and delusional president who will not accept reality.

America’s allies are deeply concerned over the chaos in Kabul and many have sent in their own forces to extract their citizens before the Talban take full control of the city, including the main airport. In reality, Biden has dramatically undermined U.S. allies and America’s standing in the world.

Further, by failing to consult the British government and other NATO allies on the timing of the Afghanistan withdrawal, Biden is damaging the U.S.-U.K. special relationship, America’s most important bilateral partnership.

The British have fought shoulder to shoulder with the United States on the battlefields of Afghanistan, and more than 400 British military personnel have laid down their lives in combat.

In the aftermath of the 9/11 attack on the U.S., the British were the first to stand with the U.S., and take part in military strikes against the Taliban.

The British see Biden’s actions as a betrayal. They have been stunned and shocked by the amateurish and disorganized approach taken by the Biden administration, which has put the lives of several thousand British citizens at risk. Staggeringly, it took Biden 36 hours to return a call from Prime Minister Boris Johnson last week, as the Taliban strengthened its iron grip over the Afghan capital.

The British parliamentary response has been fast and furious. The House of Commons was recalled from summer recess last Wednesday, with dozens of members of Parliament and government ministers condemning the “catastrophic” and “shameful” approach of the Biden presidency.

One member of Parliament spoke of Biden “throwing us and everybody else to the fire.” Others referred to the U.S. president as “dishonorable” for blaming the Afghans for their own demise, and accusing them of refusing to fight.

The criticism from members of Parliament was widely echoed in the British press. In the words of the London Daily Telegraph: “The US’s tawdry, hopelessly mishandled withdrawal matters to the entire Western community because it has grim humanitarian consequences, Islamists have gained a base of operations, and our global competitors are emboldened.”

No U.S. president in modern times has been more loudly and unanimously rebuked by Great Britain’s political leaders than Biden.

On a visit to London last week, I was struck by the damning comments reserved for the U.S. president not only from backbench MPs but also from government ministers as well.

British lawmakers are utterly horrified with Biden’s reckless and dangerous approach. They are also appalled by his hostile stance toward Brexit, his unwillingness to move forward with a U.S.-U.K. trade deal, and his administration’s “woke” far-left ideology.

Biden is greatly undermining America’s position as the leader of the free world. His disastrous foreign policy and weak leadership is hugely damaging to the image of the United States across the Atlantic and throughout the free world.

The U.S. needs a grown-up in charge.

Biden is rapidly becoming an embarrassment, and his non-leadership is a gift to the enemies of the West, from the Taliban to the Chinese Communist Party.

America has never been weaker at the helm in the modern era, and many of our allies are now looking to America post-2024 for the restoration of U.S. leadership.