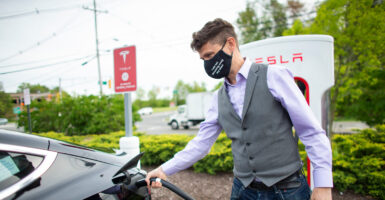 A man charges his Tesla electric vehicle at a charging station in Parsippany, New Jersey, on May 6. President Joe Biden's Aug. 5 executive order calling for half of new vehicles sold in the U.S. to be zero-emission vehicles by 2030 would necessitate far more such charging stations nationwide. (Photo: Kena Betancur/AFP/Getty Images)

President Joe Biden issued an executive order Aug. 5 calling for half of all new vehicles sold in the U.S. to be zero-emission vehicles by 2030.

A president can’t exactly force Americans to buy an electric vehicle, and Biden largely meant his executive order as a messaging tool to fuel enthusiasm for his climate agenda. But it threatens to ignore customers along the way.

Studies from the Congressional Research Service and the University of California at Berkeley show the vast majority of tax credits for buying an electric vehicle have gone to corporations and to Americans in top income brackets.

Nor should we pretend that they don’t come with trade-offs. All transportation options require compromises, because there’s no perfect vehicle or energy resource. For example, if more Americans are driving electric vehicles in the next decade, as Biden wants, when and where you recharge them matters.

High electricity demand equals high stress on grid infrastructure, as Californians and Texans have found out with rolling blackouts and calls to reduce consumption.

Another electric vehicle trade-off is the manufacturing of (and eventually disposal of) batteries. A typical electric vehicle needs six times the mineral inputs as manufacturing a conventional car, according to the International Energy Agency. The vast majority of those minerals are mined in China, with its far more lax labor and environmental protections.

Trade-offs are also exactly why the relationship between customers and businesses is so important. As companies strive to understand the diverse needs, priorities, and preferences of customers, they must innovate to get ahead.

Customers benefit from robust competition and innovation, whether that’s between traditional vehicles, electric vehicles, alternative fuel vehicles, or the “next thing” in transportation that hasn’t even been imagined yet.

EPA Along for the Ride

As mentioned earlier, the president can’t make you buy an electric vehicle. But he can make it very difficult for car companies to manufacture and sell alternatives.

In short, the standards would make it that much harder to build and sell a traditional gasoline-fueled car or pickup truck in the U.S. Effectively, they serve to box out the competition for electric vehicles.

The standards, if finalized, would almost certainly raise costs for customers, as previous standards under the Obama administration did.

There’s also a sordid and complicated backstory behind how those numbers were arrived at, the long and short of it being caballing between the state of California, big business, and the EPA, which does not bode well for either customers or representative democracy.

Even so, environmental activists are now saying that’s still not enough.

The president’s executive order and the EPA’s proposed car regulations are all in service of Biden’s commitment as part of the Paris Agreement to halve U.S. greenhouse gas emissions by 2030 in an effort to reduce global warming. But that isn’t even good climate policy.

There’s a temptation in the U.S. to take a myopic approach to climate policy; that is, to not consider domestic policy in the global context of climate change.

Two-thirds of all carbon dioxide emissions come from emerging and developing nations. China emits twice as much as America. Even John Kerry, the president’s special climate envoy, has said on several occasions that industrialized nations could eliminate all greenhouse gases and it would have no impact on global temperatures by the end of the century.

Biden’s electric vehicle aspirations and the EPA’s aggressive proposed vehicle emissions standards ignore those realities. And they make Americans poorer (death by a thousand regulatory cuts), which harms their ability to be resilient and adapt to change or adversity, from wherever it comes.

It also forgets a reality Americans should be very proud of. Over the past 40 years, air pollution has declined more than 70%, even as more Americans are driving more miles than ever before.

Air quality in the U.S. is among the best in the world. We have a lot to celebrate.

The federal government should not be the locus of supply and demand for cars. That kind of centralized control isn’t good for customers—who, as we noted, have diverse needs, priorities, and preferences—and it narrows the scope of innovation to government-preferred ends.

But that’s not how Biden and many of his allies see things, and it’s time Congress took back the wheel.