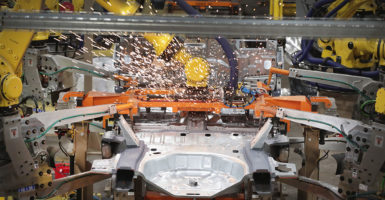 Some automakers are using the more stringent fuel economy standards of California over the U.S. standards. (Photo: Scott Olson/Getty Images)

Now, the automakers are siding with California, voluntarily agreeing to increase the average fuel economy of their fleets to about 50 miles per gallon by 2026.

But what’s been lost in the administration’s tussle with California and the automakers is what’s best for the consumer.

The market for vehicles is not one-size-fits-all. Some consumers value speed, size, or safety over fuel efficiency.

In order to comply with fuel economy standards, car companies must forgo designing a vehicle based solely on what consumers actually want. The regulations force automakers to produce lighter, less safe vehicles. As the Insurance Institute for Highway Safety clearly states, “Bigger, heavier vehicles are safer.”

To be clear, drivers value fuel efficiency. One of the biggest expenses for American families is transportation. Fully 95% of American adults own a vehicle and spend thousands of dollars annually on car payments, maintenance, and insurance. Gasoline is another significant cost.

Importantly, it’s not a legitimate function of the federal government to tell consumers how to save money or what attributes should be most important when buying a product.

The federal government could ostensibly save consumers money by forcing all automakers to adhere to one design, but that would not make them better off.

Forcing automakers to meet fuel economy standards increases the upfront cost of new cars and trucks, as it requires new engineering designs, spending on new materials, and changes to vehicles that automakers might otherwise not make, just to comply.

The change in the price of new vehicles has ripple effects throughout the new and used car markets. Higher costs price new buyers out of the market and increase the demand for used vehicles, causing the price of used vehicles to rise.

Higher prices in the new and used vehicle markets cause car owners to hold onto their vehicles longer, resulting in less fleet turnover, which negates some of the intended fuel savings and emissions reductions.

Even when factoring in monetary savings from greater fuel economy, economists have shown that there’s a net cost to consumers.

While those price scenarios are plausible, increases in oil supply and changes in consumer behavior could drive prices down, and consumers would save much less money than projected.

When gas prices are low, there’s less value to higher fuel economy. Either way, the reality is that it’s very difficult to project gas prices 30 weeks into the future, let alone 30 years.

As Car and Driver notes, the Obama administration’s targets, “first drafted in 2008, assumed a continuation of record-high gas prices, a heavy adoption of electric vehicles, and could not predict a U.S. oil boom that dramatically increased domestic production.”

The bottom line is that markets are unpredictable.

No matter how well-intentioned or allegedly flexible a regulation may be, regulations do not appropriately adapt to the pace of innovation or changes in prices and consumption trends.

The federal government implemented fuel economy mandates under the false premise of imminent resource exhaustion. They are a relic of the past. Those mandates were not good policy in the 1970s, and they make even less sense today in an era of oil abundance.

Furthermore, proponents of fuel economy mandates incorrectly label spending to comply with the standards as an “investment.”

They argue the mandates drive innovation and create jobs. However, the reality is automakers are paying to comply with an unnecessary regulation, and they pass the costs onto car and truck buyers.

Moreover, regulations are not economic drivers or job creators. Spending money to comply with mandates results in an opportunity cost. Money allocated toward regulatory compliance cannot be simultaneously invested elsewhere in the company, whether it be on creating innovations for consumers or hiring more employees.

Both the regulatory costs and the opportunity costs harm the consumer.

Whether it’s clothing, food, or vehicles, markets work more efficiently when products are consumer-centric. The administration’s rule moves the needle in the right direction by focusing on the consumers, not the automakers.