Do Student Suspensions Really Cause a ‘School-to-Prison Pipeline’? 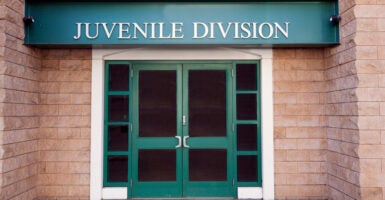 Proponents of federal orders to reduce or eliminate school student suspensions are waving a recent study around as confirmation that federal intervention is necessary to stop the flow of suspended minority students into prisons later in their lives. (Photo: Joe Potato/ iStock/Getty Images)

The Biden administration is picking up where the Obama administration left off in trying to dictate to local school districts how they should best discipline students.

Its justification for acting as national school principal is based on the claim that suspending students harms them by excluding them from the learning environment and by stigmatizing them as troublemakers.

It observes that students who are suspended tend to have worse outcomes later on, including lower test scores, greater likelihood of dropping out, and eventually, a higher rate of committing crimes.

But that observation may confuse what’s causing what.

Students with more serious problems are more likely to be suspended and, because they have those problems, they also tend to have lower test scores, higher dropout rates, and subsequently greater rates of criminal activity.

A recent study with a heavy-handed title, “The School-to-Prison Pipeline,” claims to have untangled this causal confusion.

It examines middle schoolers in Charlotte-Mecklenburg, North Carolina, who were switched into new schools when school boundaries were redrawn in 2002. Some students were reassigned to schools with a higher rate of suspensions and some to schools with a lower rate.

The authors of this study claim that the redrawing of school boundaries constitutes a natural experiment whereby chance largely determines whether students go to a school with a lot of suspensions or one with few.

Proponents of federal orders to reduce or eliminate suspensions are waving this study around as confirmation that federal intervention is necessary to stop the flow of suspended minority students into prisons later in their lives.

Before jumping on this bandwagon, people should more closely scrutinize what this study actually examines and how it claims that its results are causal.

Importantly, this research does not look at how changing school discipline policies affects students. Instead, it looks at how students are affected by being in a school with more suspensions versus one with fewer.

Schools with identical school discipline policies could vary substantially in the rate of suspensions based on how the school is run and whether there’s a concentration of students inclined toward behavior problems in it.

That is, a poorly-run school may be unable to maintain classroom order without having to suspend a lot of students, while a well-run school could have the same discipline policies, but relatively few suspensions.

The researchers mischaracterize their work as answering whether there is “a causal link between experiencing strict school discipline as a student and being arrested or incarcerated as an adult.”

That’s inaccurate because schools of equal “strictness” could produce very different rates of suspensions, depending on how well-run they are and how many students with behavior problems they have.

Another way to describe what they’re examining is whether there’s a causal link between going to a poorly managed school with a lot of behavioral problems and later-in-life incarceration.

If the answer were yes, it would not mean we would want to have the feds crack down on suspensions. It could mean that we need to improve school management quality and strengthen families and communities so that students are less likely to come to school with behavioral difficulties.

In the longer, more scholarly version of their study, the authors acknowledge this limitation:

While the large exogenous change in peers caused by the redrawing of school boundaries partly addresses this concern, we ultimately cannot directly connect our estimates of school ‘strictness’ to concrete policy changes.

To address that concern, they estimate that outcomes change when principals move into and out of schools, which they see as evidence of changes in discipline policy, but could just as easily be evidence of management quality.

They also estimate whether being reassigned to a school with worse peers might cause the bad later-in-life outcomes by examining the influence of a handful of observed student characteristics on their results.  Unfortunately, by design, they cannot control for the prior disciplinary problems of those peers, which is precisely the bad kind of peer that we would worry about.

In addition to not actually examining school policies, we should also worry about whether school boundary changes are truly random and produce a “natural experiment.”

Just because the lines were redrawn by a court does not mean that political influences had no effect on which groups of students ended up on the “wrong” side of some boundary changes.

Social science is much more challenging and limited in what it can say than many people realize. This study doesn’t directly address the policy question it raises. It is also undermined by its inability to distinguish the effects of quality of school management and concentrations of misbehaving students from the effects of school discipline policies. Lastly, its results may not be truly causal because school boundary changes may not be effectively random.

This one study in particular, and social science more generally, are not a strong enough basis to override our long-standing practice of allowing local school districts to determine their own discipline policies.