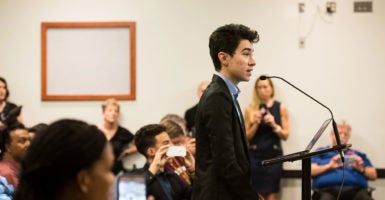 While the media continues to focus on gun control in the wake of the Marjory Stoneman Douglas High School shooting in Parkland, Florida, one area student has dug into his school’s policies and found them wanting.

Kenneth Preston, a 19-year-old student journalist who attends high school in Broward County, Florida, has done an in-depth investigation of the superintendent and school board.

Preston’s report says that the school had been sitting on this money since 2014, and that only about 5 percent of it had been spent.

“The findings of our investigation is [sic] two-fold. First off, a $100 million which superintendent and the school board had access to. Since 2014, roughly 5 percent of that money has been spent,” Preston said in an in-depth interview with Sirius XM host David Webb.

Preston said that Runcie gave him a “long-winded runaround” about what happened to the money.

In addition, Preston has called into question the school district’s use of the PROMISE program.

This program was aligned with a 2014 Obama-era federal initiative, which aimed at ending the “school to prison pipeline” as well as racial disparities in discipline by focusing on counseling and “restorative justice” instead of using law enforcement to correct on-campus misbehavior.

Preston spoke at a Broward County School Board meeting on Tuesday, but said during his remarks that just before the meeting started, his allotted time to speak was cut to three minutes.

The seven panelists Preston had lined up were removed from the schedule.

On the day before the hearing, Preston said he was forced to attend a two-hour meeting with the superintendent and the families of the victims to discuss his report.

“I was denied the right to have an attorney present. I was refused the opportunity to record the meeting, and I was told this was because the superintendent wouldn’t have any representation of his own,” Preston said.

He said that when he arrived at the meeting, it was “stacked with 10 district officials in addition to the superintendent.”

Preston continued: “It makes me wonder how committed to transparency and truth you are when I was denied the right to have an attorney present as well as the opportunity to record the meeting while the superintendent was allowed to bring 10 district officials who work for him and attempt to re-educate me.”

“Something doesn’t smell quite right in Broward, and this school district is the epicenter,” Preston said.

The Obama administration had touted the Broward school discipline program as a model of success.

But after a Parkland student went on a murderous rampage at the school, many wonder how an individual expressing so many red flags could have fallen through the cracks.

As the Manhattan Institute’s Max Eden wrote, Broward County’s discipline policies pressured Parkland officials “to post lower statistics on school-safety problems. This climate of disengagement could have allowed [Nikolas] Cruz to slip through the cracks in the system.”

Runcie, who was also at the school board hearing, reiterated previous statements from the school district, saying, “Contrary to what people believe or may have heard, Nikolas Cruz was never a part of the PROMISE program, he never had any infractions that would have made him eligible for the PROMISE program.”

However, a recent report in RealClearInvestigations noted that the school’s official discipline policy lists “‘assault without the use of a weapon’ and ‘battery without serious bodily injury,’ as well as ‘disorderly conduct,’ as misdemeanors that ‘should not be reported to Law Enforcement Agencies or Broward District Schools Police.’”

A repeat offender, Cruz benefited from the lax discipline policy, if not the counseling. Although he was disciplined for a string of offenses—including assault, threatening teachers, and carrying bullets in his backpack—he was never taken into custody or even expelled. Instead, school authorities referred him to mandatory counseling or transferred him to alternative schools.

The lack of criminal record allowed Cruz to purchase an AR-15, according to the report.

“Connecting PROMISE to this horrific tragedy is truly unfortunate, I think it’s reprehensible, and we’re not going to dismantle a program in this district that is serving and helping kids appropriately because of news that is not fact-based,” Runcie said.

Runcie worked closely with the Obama administration on its school discipline policy, according to the Washington Examiner.

“Runcie was invited to the White House in 2015 for a Rethink Discipline summit, while the district received a $54 million federal Teacher Incentive Fund grant in October 2016 that was based in part on its efforts to keep high-risk students in school,” the Examiner reported.

While the school district maintains support of the controversial program, it has a growing list of detractors, including the deputy sheriff and president of the Broward Sheriff’s Office Deputies Association, Jeff Bell.

“If I have a weapon or even ammunition on school grounds, and I have certain things in my past, I could be arrested for that, but Mr. Cruz just gets off scot-free,” Bell said, according to the Examiner. “And that’s the thing. If he had gotten arrested just once for disorderly conduct or trespassing or something like that, that would have shown up on his criminal record, and could have sent up some red flags before he was ever allowed to buy a firearm.”

There have also been calls for the Department of Education to rescind the Obama-era school discipline guideline, which is being reviewed by Secretary of Education Betsy DeVos.