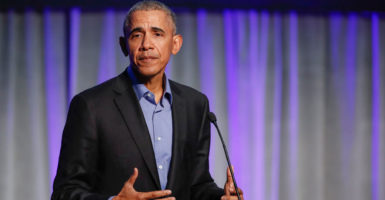 A school discipline initiative launched by the Obama administration has become the subject of national debate after the Feb. 14 massacre at a high school in Parkland, Florida. (Photo: MEGA / Newscom)

As is typical with so many other policies, federal meddling in what should be a local matter leads to poor results.

This is the conclusion reached Monday by a Heritage Foundation panel about a school discipline initiative, launched by the Obama administration, that suddenly became the subject of national debate after the Feb. 14 massacre at a high school in Parkland, Florida.

A “Dear Colleague” letter from the Department of Education in 2014—designed to crack down on racial disparities in school discipline and reduce the “school to prison pipeline”—created negative unintended consequences, according to Manhattan Institute scholar Max Eden, who was on the panel.

Sen. Marco Rubio, R-Fla., recently suggested in a memo to Education Secretary Betsy DeVos that the guidance to schools led to “systematic failures” to report the Parkland shooter to legal authorities.

Eden and other panelists explained the specific problems the Obama policy created for schools around the country. They identified these five issues, among others:

Gail Heriot, a University of San Diego School of Law professor and member of the U.S. Commission on Civil Rights, was part of the panel and explained how the Obama administration used the guidance as a potential cudgel against fearful schools.

In particular, Heriot said, the threat of an Education Department investigation had a chilling effect on schools that intended to discipline a minority student in particular.

“If the federal government had said, ‘Don’t discipline minority students unless it’s justified,’ it would have sounded reasonable,” Heriot said.

But how schools read it, she said, is more like “Don’t disciple a minority student unless you’re confident you can persuade some future federal investigator, whose judgment you have no reason to trust, that it was justified.”

The nature of bureaucracy, Heriot said, means that it’s “inevitable” for those trying to follow such guidelines to overreact.

Schools simply avoided disciplining troubled students because they were fearful of being caught up in a costly investigation, panelists said.

Eden, the Manhattan Institute scholar, also spoke about the chilling threat of investigation. The Obama policy was not guidance, he said, “these were orders.”

Any time a school had a racial disparity in school discipline cases, administrators faced an investigation, so the best way to hold down the number of punishments was simply to lower standards, Eden said.

“These investigations hit hundreds of districts, serving millions of students,” Eden said. “The scope of it is breathtaking.”

A breakdown of school discipline made it more difficult for serious students to succeed in schools that serve mostly low-income families with high levels of minority students.

Ford described how students in Arkansas that she spoke to would often stay home because they were afraid of other students picking fights, and had concluded that teachers wouldn’t do anything about it.

One girl explained to Ford how students at her school didn’t feel safe “because the kids that were creating a lot of the discipline problems” got “a slap on the hand” instead of real punishments.

“There were no consequences to their actions,” Ford said, and this creates an environment in which good students feel “unsafe.”

Most educators want students to be more civically engaged, said Pondiscio, a former fifth-grade teacher at a South Bronx public school. But, he said, it sends an awful message to children when the place that they do engage are places where they “feel unsafe, where they are bullied, or, God forbid, harmed, and there’s no meaningful consequence.”

The guidance to schools from the Obama administration took discipline decisions out of teachers’ hands and put them in the hands of bureaucrats, critics said.

The discrepancy in school discipline is based on disparate rates of bad behavior in classrooms—black, white, asian, and other ethnic groups have different levels of discipline problems—and teachers are reacting to this.

Teachers are simply “identifying the students who are actually misbehaving,” Heriot said, “and especially for the worst offenders, it tends to be the same kids.”

“Once prior behavior is taken into account, race drops out as a predictor, entirely,” Heriot said.

But now it’s more difficult for teachers to use their best judgment to discipline students and it’s leading classrooms to get out of control, panelists said.

Classrooms are becoming a “battleground,” not a “safe haven,” Ford said.

“We’ve seen it since the Obama administration policy: Teachers are afraid to do anything, say anything,” Ford said, adding, “They’re not safe because they can’t make decisions on how to discipline kids.”

Students who misbehave understand that teachers can’t do anything to them, so bad behavior escalates and makes schools a poor environment for education, Ford said.

4.) Arrests and Suspensions Went Down, So Did Academic Standards

The Obama administration policy pressured schools to reduce arrests and suspensions. That occurred, panelists said, but the discipline problem escalated, and many schools suffered academically.

“A significant portion of the achievement gap is actually a time-on-task gap,” Pondiscio said he surmised. “And much of that time-on-task gap is caused because of disruptions in the classroom.”

Getting climate and culture right in the classroom is a delicate task for teachers, Pondiscio said, and it is often more important than the actual content of instruction.

Eden said “lazy reporters” focused on selected statistics that show suspensions going down, and then they insinuated it is a sign that schools are getting safer.

Eden said he reviewed data on school districts after the Obama guideline was put in place. From the little data that existed, he found “across the board” drops in achievement, higher levels of truancy, and in some cases, more time spent out of school specifically for black students because more serious incidents were taking place.

Ultimately, one of the biggest problems with the Obama guidance on school discipline is that it injected federal meddling into an issue best handled by states and localities, panelists said.

“A lot of this guidance comes with the discomfort of the excesses of ‘zero tolerance,’” Eden said.

Zero tolerance policies are the other side of the same coin, he said, explaining that they also took power out of teachers’ hands and forced them to take actions against students.

If we don’t want police to be stepping into classrooms, it’s important to allow teachers to use greater discretion about how they discipline students, Eden explained.

Additionally, policies that worked well in some areas failed in others because of the differences among localities, panelists said. The federal government is poorly equipped to handle these nuances.

“When a locality makes a mistake,” Heriot said, “it’s a lot easier to correct at a local level than when the federal government says, ‘You must do this.’”