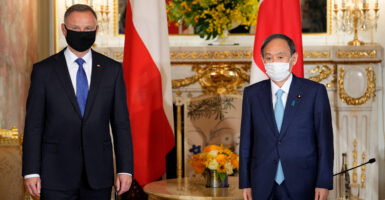 The Three Seas Initiative has scored another notable achievement in Tokyo, following the successful gathering of the sixth Three Seas Summit and Business Forum in Sofia, Bulgaria, earlier this month.

During his visit to Japan last week for the opening ceremonies of the Tokyo Olympics, Polish President Andrzej Duda—one of the founding members of the Three Seas Initiative—met with Japanese Prime Minister Yoshihide Suga on a range of issues of mutual interest.

In particular, the leaders of the two nations that have been linked through a strategic partnership since 2015 shared their perspectives on the Three Seas Initiative and agreed to work more closely in terms of practical action that can further operationalize the initiative in concrete ways.

Suga affirmed that Japan is interested in participating in projects related to the initiative, along with other nonmember partners, such as the United States and Germany.

The regional initiative—initially dismissed by many as just talking shop, which would have little impact on the real world—has become increasingly relevant.

China’s “17+1” bloc in the region is losing momentum. Lithuania pulled out of that bloc in May, and Beijing’s influence in Central and Eastern Europe is facing increasing resistance. The Three Seas Initiative is an increasingly viable alternative.

The initiative has its own investment fund, known as the Three Seas Initiative Investment Fund, which has garnered strong support from the United States and is attracting other countries interested in membership.

America’s ongoing support for the Three Seas Initiative is smart, timely, and strategic, particularly given its growing relevance. It’s notable that both the U.S. and Germany are increasingly interested in the success of the initiative, which looks set to become the most vital platform for regional cooperation in Central and Eastern Europe.

Japan’s strong interest and participation in the Three Seas Initiative is thus more than welcome.

Fundamentally, the Three Seas Initiative is and should be a practical platform for attracting private sector investors. The initiative’s success is undoubtedly dependent on building private partnerships reinforced by the U.S. commitment to the region.

During the Three Seas Initiative summit July 8 and 9 in Bulgaria, President Joe Biden said, “There is incredible potential for increasing cooperation and connectivity among this group that will enhance the security and prosperity of the region and, quite frankly, benefit the world.”

“The United States will be an unfailing partner of the initiative,” Biden added.

It is indeed in Washington’s long-term foreign policy interest to take a multifaceted approach to advancing its transatlantic policy objectives, building greater economic relationships, and upholding the shared values of democracy and the rule of law, together with like-minded, willing allies around the region.

The Three Seas Initiative can play an important role in achieving those goals.