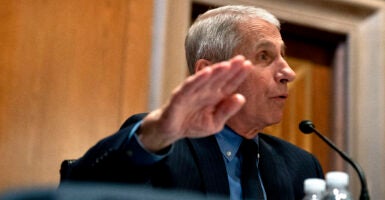 Dr. Anthony Fauci is only the latest public figure to be accused of lying to Congress. Pictured: Fauci, director of the National Institute of Allergy and Infectious Diseases, speaks May 26 during a Senate Appropriations subcommittee hearing. (Photo: Stefani Reynolds/Getty Images)

Prosecutions for lying to Congress are rare, much less convictions, but some cases have been high profile.

The issue is in the news because Sen. Rand Paul, R-Ky., has asked the Justice Department to investigate whether Anthony Fauci, director of the National Institute of Allergy and Infectious Diseases, misrepresented facts to Congress.

Fauci, responding angrily to Paul in a hearing last week, said he “never lied before the Congress.”

“The Justice Department has a checkered past,” Kamenar told The Daily Signal. “They didn’t go after [former National Intelligence Director] James Clapper. So, even if it were clearly the case that Fauci could be prosecuted, they might not go after the head of the Biden administration’s COVID task force.”

Prosecutions for lying to Congress are exceedingly rare, according to a 2007 Quinnipiac Law Review article by P.J. Meitl, later a federal prosecutor in Texas.

“Almost no one is prosecuted for lying to Congress,” Meitl wrote. “In fact, only six people have been convicted of perjury or related charges in relation to Congress in the last sixty years.”

The rarity could be because the stakes are higher in court cases, said John Malcolm, director of the Meese Center for Legal and Judicial Studies at The Heritage Foundation. (The Daily Signal is Heritage’s multimedia news organization.)

“Court proceedings go on longer and a member of Congress has five minutes to ask a question of the witness, and usually uses three of those minutes speaking himself,” Malcolm, who was an associate independent counsel in the prosecution of former Interior Secretary James Watt in part for lying to Congress, told The Daily Signal.

“In Congress, testimony is about forming public policy,” he said. “In a criminal court, someone’s liberty is at stake. It could determine whether there is a guilty verdict.”

Here are eight examples of major figures who were accused of lying under oath to Congress, and what happened to them.

At some level, Clapper seemed to concede that wasn’t true. After the Edward Snowden revelations, he said that it was the “least untruthful” statement he could make.

However, Clapper wasn’t charged with lying to Congress, despite some protests by senators.

In the hearing, Sen. Ron Wyden, D-Ore., asked Clapper: “Does the NSA collect any type of data at all on millions, or hundreds of millions of Americans?”

Wyden, apparently looking for assurance, asked: “It does not?”

Clapper said: “Not wittingly. There are cases where they could inadvertently, perhaps, collect, but not wittingly.”

NSA employee Snowden leaked information to the media that June showing that the NSA collected metadata from phone calls.

Several lawmakers from both parties, including Paul, called for Clapper to be held accountable for deceiving Congress.

Wyden, who asked the question, said: “Regardless of what was going through the director’s head when he testified, failing to correct the record was a deliberate decision to lie to the American people about what their government was doing.”

Malcolm, in the interview with The Daily Signal, speculated that the Justice Department declined to investigate this case because it involved classified information.

In 2015, former Secretary of State Hillary Clinton told the House Select Committee on Benghazi that “there was nothing marked classified on my emails, either sent or received.”

Then-FBI Director James Comey announced in July 2016 that he would not recommend prosecuting Clinton for using a private email server rather than a government one.

However, Comey was clear that some of Clinton’s emails contained markings showing the information was classified.

Comey said: “I think it’s possible—possible—that she didn’t understand what a C meant when she saw it in the body of an email like that.”

Roger Stone was charged with lying to the House Select Committee on Intelligence about communications with WikiLeaks about when the website would publish emails damaging to Hillary Clinton campaign aide John Podesta.

Stone eventually was convicted with lying to Congress and witness tampering in early 2020.

On his way out of office, Donald Trump pardoned Stone and other campaign associates.

A former pitcher for the New York Yankees and Boston Red Sox, Roger Clemens was charged in 2010 for telling the House Oversight and Government Reform Committee that he never used performance-enhancing drugs known as steroids.

Clemens was acquitted in 2012.

In late 2018, Trump’s personal lawyer, Michael Cohen, pleaded guilty in a New York federal court to lying to Congress about work he did in hopes of building a Trump Tower in Russia.

The real estate project in Russia was in the planning stages before Trump was president. Trump’s company ditched the plan when it was clear he would be the Republican presidential nominee in 2016.

Cohen made the false statement to the Senate Intelligence Committee and came under investigation in the probe by special counsel Robert Mueller, who investigated Russian meddling in the 2016 presidential campaign.

H.R. Haldeman was one of the key figures in the Watergate scandal that ended the presidency of Richard Nixon. In 1975, the former White House chief of staff was convicted of obstruction of justice and perjury in testimony to the Senate Watergate Committee that investigated the 1972 break-in at Democratic National Committee headquarters.

Haldeman was sentenced to eight years and served 18 months.

Many others were convicted in the Watergate cover-up, among them former Attorney General John Mitchell. But Haldeman was among key figures convicted for his testimony to Congress.

Former Defense Secretary Caspar Weinberger, who served under President Ronald Reagan, was indicted for lying to Congress in 1992 regarding the Iran-Contra scandal.

Other figures, such as Clair George, deputy director of operations at the CIA, and John Poindexter, Reagan’s national security adviser, were charged with lying to Congress.

In 1995, former Interior Secretary James G. Watt, who served in the Reagan administration, was indicted for perjury, obstruction of justice, and hiding subpoenaed documents tied to his alleged role in a scandal at the Department of Housing and Urban Development.

The charges included lying to a federal grand jury and to Congress about Watt’s lobbying of former HUD Secretary Samuel R. Pierce Jr. and other HUD officials to promote certain private developers.

In 1996, Watt pleaded guilty to a misdemeanor charge of trying to influence a federal grand jury and avoided the other charges.

As part of that same criminal probe, Deborah Gore Dean, a cousin to former Vice President Al Gore, was sentenced to 21 months and fined $5,000 for her role.

Dean was convicted in 1994 of steering millions of dollars in HUD contracts to favored developers, accepting an illegal payment, and lying to Congress.