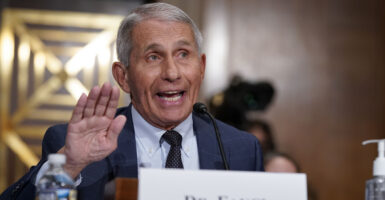 Sen. Rand Paul has asked the Justice Department to investigate whether Dr. Anthony Fauci lied to Congress about the possible origins of COVID-19, but legal experts involved in similar cases say they’re not sure this would be a strong one.

For one, past prosecutions for lying to Congress have a mixed record, and the law hasn’t been applied across the board.

What’s more, the contention between Paul, a Kentucky Republican, and Fauci, director of the National Institute of Allergy and Infectious Diseases, might boil down to differing definitions of what experts call “gain of function” research.

“This is definitely a valid issue for Sen. Paul to raise. However, the Justice Department might decline further action if they determine there is some debate on whether the ‘gain of function’ term has various interpretations to it,” Paul Kamenar, counsel for the National Legal and Policy Center, told The Daily Signal in a phone interview.

>>> Before Fauci, Here Are 8 Others Accused of Lying to Congress

The National Legal and Policy Center, a watchdog group, is seeking information from the federal government about National Institutes of Health grants to the nonprofit EcoHealth Alliance, which then gave almost $600,000 to the Wuhan Institute of Virology in Wuhan, China, from 2014 through 2019.

The new coronavirus that causes COVID-19 originated in the city of Wuhan. NIH is the parent agency of Fauci’s infectious diseases institute.

Asked on Fox News Channel what response he anticipates from the Justice Department, Paul said: “I assume they will act in a very partisan way and they will not pursue this.”

Fauci, a top government authority on COVID-19 for both the Trump and Biden administrations, was adamant during his testimony in May to the Senate Health, Education, Labor and Pensions Committee.

“The NIH and NIAID [National Institute of Allergy and Infectious Diseases] categorically has not funded ‘gain of function’ research to be conducted in the Wuhan Institute of Virology,” Fauci said at the time.

“Gain of function” refers to changing a sample of a virus, such as to make it more contagious or dangerous, in order to study a more effective response to it. Paul cited the NIH definition of the term to note that it includes making an animal disease more transmissible to humans.

The National Institutes of Health put a “pause” on gain of function research in 2014, during Barack Obama’s second term as president, but lifted it in 2017, Donald Trump’s first year as president.

After his Senate testimony in May, Fauci emails that became public showed that he was knowledgeable about the NIH grants to EcoHealth Alliance.

So, at a hearing last Tuesday, Paul asked Fauci whether he wanted to retract his statement at the May hearing.

Fauci replied: “I have never lied before the Congress, and I do not retract that statement.”

Fauci added that EcoHealth Alliance’s funding of Wuhan lab research “was judged by qualified [NIH] staff up and down the chain as not being gain of function.”

Fauci’s assertion last week about running the nonprofit’s use of taxpayers’ money through the parent agency should be verifiable through a Freedom of Information Act request filed by the National Legal and Policy Center, Kamenar said.

Kamenar represented former Trump campaign adviser Roger Stone, who was convicted of lying to Congress during its Trump-Russia probes.

“If documents we have requested show that the gain of function [research] wasn’t judged up and down the chain, then Dr. Fauci could be in some trouble,” Kamenar said.

Lying before Congress is difficult to prove, said John Malcolm, director of the Meese Center for Legal and Judicial Studies at The Heritage Foundation.

“It’s not enough to prove someone was wrong or even egregiously wrong,” Malcolm, who was an associate independent counsel in the prosecution of former Interior Secretary James Watt for lying to Congress and a grand jury, told The Daily Signal in a phone interview. “You have to prove they knew they were wrong and lied about it.”

A perjury case has to meet four key criteria, Malcolm said: A person must be under oath, his or her statement must be material to the investigation, the statement must be factually wrong, and prosecutors must prove the person “knew darn well what he said was wrong.”

CNN’s Jake Tapper asked Fauci over the weekend whether the U.S. government would continue funding research at the Wuhan lab. “We have always been very careful. And, looking forward, we will continue to be very careful in what we do,” Fauci responded.