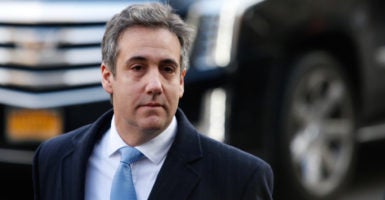 Before he begins a three-year prison sentence for lying to the Internal Revenue Service about the taxes he owed, lying to financial institutions, and lying to Congress, Michael Cohen—President Donald Trump’s former personal attorney—is scheduled to testify about Trump at a congressional hearing Feb. 7.

Anti-Trump Democrats and others who hate the president are sure to love Cohen’s testimony. While Cohen said in 2017 that he would “take a bullet” to protect Trump, that turned out to be yet another lie.

It turns out Cohen secretly recorded phone calls with Trump—hardly ethical behavior for a lawyer dealing with a client. And he has spent over 70 hours talking with federal prosecutors in New York City and from the office of special counsel Robert Mueller about his own crimes and making allegations of wrongdoing by Trump.

Trump opponents can be sure that if Cohen goes ahead with plans to testify before the House Oversight and Reform Committee his words will be music to their ears.

Once demonized by the anti-Trump crowd, Cohen has since been embraced by many of his former critics for turning on his former boss, who provided him with a paycheck for 12 years until they parted ways last year.

But with his long record of lying again and again, why should anyone believe a word Cohen says regarding Trump or anything else?

Rep. Elijah Cummings, D-Md., will preside over the hearing where Cohen testifies. Now that Democrats are the majority party in the House, they have promised to aggressively investigate the president’s activities in the private sector, in his personal life, and in government.

Cohen himself issued an unintentionally ironic statement about his upcoming testimony, blithely asserting that he looked forward to having “a platform with which to give a full and credible account of the events which have transpired.”

This from a man already convicted of lying to Congress—among other felonies.

Can we really expect a “full and credible” account from Michael Cohen? Or will his testimony be just another piece in what acting U.S. Attorney Robert Khuzami of the Southern District of New York called Cohen’s “pattern of deception,” designed to make himself look good and to shift blame for his misdeeds onto the president?

Khuzami has described Cohen as someone who “repeatedly used his power and influence for deceptive ends.” Cohen’s illegal conduct was “marked by a pattern of deception that permeated his professional life” and he engaged in “extensive, deliberate, and serious criminal conduct,” according to Khuzami.

Cohen pleaded guilty in federal court to willful tax evasion, false statements to financial institutions, illegal campaign contributions, and making false statements to Congress. Khuzami noted that all of the crimes bore a “common set of characteristics.” Each involved “deception” that was “motivated by personal greed and ambition.”

In his testimony scheduled for Feb. 7, Cohen will swear an oath to tell the truth. But he previously swore—falsely and repeatedly—that the tax returns he submitted to the IRS were “true and accurate.”

Khuzami faulted Cohen for his submissions to prosecutors in which Cohen “repeatedly attempted to minimize the seriousness of his decision not to report millions of dollars of income over a period of years by blaming his accountant”—assertions that prosecutors said “are simply false.”

Do we have any reason to expect Cohen to change his stripes when he comes before Congress next month?

Cohen didn’t lie to just the IRS and prosecutors. Khuzami’s sentencing memorandum noted that Cohen told “numerous financial institutions” a “long-series of self-serving lies” about his assets and liabilities.

Cohen previously lied to Congress about a real estate deal in Russia that the Trump organization had been negotiating for 30 years. Nothing about the deal itself was unlawful, but Cohen’s ham-handed lies seemed intended to minimize the fact that he was still discussing this deal during the first half of 2016.

Now that the House Oversight Committee is run by Democrats, Cohen has every incentive to shift the blame for this potentially embarrassing deal to Trump. He probably has little fear that Democrats would want to see him prosecuted for misrepresenting what happened—as long as it advances their narrative that Trump is guilty of something.

This is because congressional Democrats aren’t really interested in Cohen. They’re interested in using Cohen to make accusations of wrongdoing against Trump.

There’s no doubt that Cohen will be asked about the hush-money payments he made to two women in exchange for not making public their unproven allegations—denied by Trump—of extramarital affairs that supposedly occurred many years before Trump ran for president.

Cohen pleaded guilty to breaking campaign finance laws by making these payments. But as I have explained before, many campaign finance experts and former members of the Federal Election Commission do not believe that the payments actually broke any federal law. As a former member of the Federal Election Commission and an attorney who has worked extensively on election law issues, I share this view.

Yet even in arranging the payments to the two women, the sentencing memorandum notes, Cohen “used sophisticated tactics to conceal his misconduct.” And when news stories about the payments began to surface, the memorandum says Cohen responded by telling “shifting and misleading stories.”

If members of the House Oversight Committee want to know why Cohen has embraced a “pattern of deception,” they should be sure to read the last part of the sentencing memorandum. Khuzami says Cohen’s behavior was driven by “his own ambition and greed.”

Originally, Cohen expected to be “given a prominent role and title in the new [Trump] administration,” according to the memorandum. When that didn’t materialize, he “successfully convinced numerous major corporations to retain him as a ‘consultant’ who could provide unique insights about and access to the new administration.”

That turned out to be a lie as well. Khuzami notes that although Cohen made more than $4 million as a consultant, he provided “little or no real services.”

The sentencing memorandum adds this kicker: Cohen “undertook similar acts of deception in his private life.”

Khuzami summed it up this way: “Cohen’s consciousness of wrongdoing is fleeting … his remorse is minimal, and … his instinct to blame others is strong.”

And this is the witness Cummings can’t wait to put on national television, so millions of Americans can hear him attack the president of the United States.

Cohen has zero credibility. Anything he says—under oath or in casual conversation—should be treated with extreme skepticism, at best.