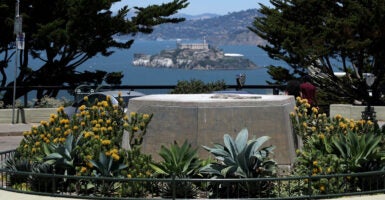 A concrete pedestal where a statue of Christopher Columbus once stood sits empty on June 18 in San Francisco. San Francisco city workers removed a bronze statue of the Italian explorer from Pioneer Park at the foot of Coit Tower after the statue had been vandalized and following reports that protesters had plans to topple the statue and dump it in San Francisco Bay. (Photo: Justin Sullivan/Getty Images)

The media spin and outright gaslighting to cover up the reality of the teaching of critical race theory in our schools and institutions has shifted into overdrive.

First, we were told it wasn’t happening at all.

Then, we were informed that trying to stop it was authoritarian fascism or something.

Now left-wing media and politicians have moved on en masse to a new narrative that critical race theory is really just about teaching accurate history and that opponents just don’t want students to know about racism and slavery.

She said that Republicans and state legislatures passing anti-critical race theory bills are just “trying to stop us from teaching kids honest history.”

Ibram X. Kendi, author of “How to be an Antiracist,” chimed in on Twitter.

She then brought up the teaching background of first lady Jill Biden.

“As a spouse of an educator and as somebody who continues to believe that children should learn not just the good, but also the challenging in our history, and that’s part of what we’re talking about here, even as it’s become politically charged,” she said.

What is this “honest” history they are trying to promote in classrooms?

The National Education Association, the country’s largest public school teachers union, said in a recent directive that it aimed to promote “an already-created, in-depth study that critiques empire, white supremacy, anti-Blackness, anti-Indigeneity, racism, patriarchy, cisheteropatriarchy, capitalism, ableism, anthropocentrism, and other forms of power and oppression at the intersections of our society, and that we oppose attempts to ban critical race theory and/or [The New York Times’] 1619 Project.”

Does that sound like just straight, plain old history to you?

Parents protesting against critical race theory aren’t calling for the removal of teaching about slavery from classrooms.

None of the anti-critical race theory bills passed in a number of states to date prohibits teaching about racism in America’s past.

Kimberle Crenshaw, one of the founders of critical race theory, wrote in a Outlook column for The Washington Post that the fact that the bills don’t mention specific events or slavery is what makes them “insidious.”

Here are some of its themes as defined by Jonathan Butcher and Mike Gonzalez of The Heritage Foundation:

-The Marxist analysis of society made up of categories of oppressors and oppressed;

-An unhealthy dollop of Nietzschean relativism, which means that language does not accord to an objective reality, but is the mere instrument of power dynamics;

-The idea that the oppressed impede revolution when they adhere to the cultural beliefs of their oppressors—and must be put through reeducation sessions;

-The concomitant need to dismantle all societal norms through relentless criticism; and

-The replacement of all systems of power and even the descriptions of those systems with a worldview that describes only oppressors and the oppressed.

Nicole Neily, the president of Parents Defending Education, said that construing bills that eliminate critical race theory from classrooms to mean not teaching about slavery or racism is totally inaccurate.

“Nobody is contesting ‘teaching history’ or ‘teaching slavery,’ and to accuse parents of doing so is not only lazy, it’s also a straw man,” Neily said, according to The Washington Times.

It’s a dodge to conceal the radical, ideological teaching being foisted on children in classrooms.

Given the kind of historical education left-wing advocacy groups are trying to impose on classrooms, it’s clear that accuracy is hardly one of their prime objectives.

Consider this: If teaching critical race theory truly is just about bringing accurate history to classrooms, why are the country’s largest public school unions partnering with The New York Times’ deeply flawed 1619 Project and the Zinn Project to do it?

The Zinn Project promotes the works of the late Howard Zinn, the communist author of “A People’s History of the United States.” His book is rife with historical inaccuracies, distortions of fact, and outright dishonesty.

It’s more a manipulative political tract than a history book.

Mary Grabar, author of “Debunking Howard Zinn: Exposing the Fake History That Turned a Generation against America,” wrote about how Zinn used a series of often factually challenged and out-of-context stories to paint a picture of the United States—and his view of “capitalism”—as inherently evil and rotten from its origin.

“The stories he put into ‘A People’s History of the United States’ weren’t balanced factual history, but crude morality tales designed to destroy Americans’ patriotism and turn them into radical leftists,” Grabar wrote.

Those ideas have been floating around in American education for a while, but recent developments have put them into overdrive in our classrooms.

The 1619 Project, which was created to “reframe” American history around the idea that slavery, not liberty, is the heart of our country’s ethos, is also filled with inaccuracies. One of the big ones is that the Founding Fathers launched the American Revolution to protect slavery, which is a ludicrous assertion.

The creator of the 1619 Project, Nikole Hannah-Jones, as much as admitted that her work wasn’t really aimed at teaching about history.

Rather, Hannah-Jones and people like her want to rewrite history to fulfill their current ideological aims.

The problem is that those powerful institutions trying to foist critical race theory, “anti-racism,” and revolution on the American people have run into parents who oppose critical race theory proponents’ political project and who don’t appreciate that their children are being taught that some are inherently oppressors or oppressed based on their race.

Whether they like it or not, the woke managerial revolution has run into democracy.