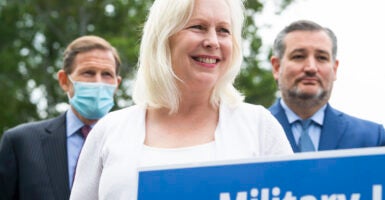 After years of trying unsuccessfully, efforts by Sen. Kirsten Gillibrand to upend the current military justice system now appear to have the support needed to succeed.

The New York Democrat’s bill—euphemistically misnamed the Military Justice Improvement and Increasing Prevention Act—would strip the authority from military commanders to enforce good order and discipline for those under their command. That, of course, is essential to accomplishing the mission.

Gillibrand’s bill, which we would call the “Military Justice Destruction Act,” would strip commanders of the power to send criminal cases to trial—with the advice of military Judge Advocate General’s Corps lawyers—and give that power to military lawyers who are not in the chain of command, nor vested with the sober responsibility of enforcing good order and discipline in the armed forces.

If enacted into law, not only would it undermine the ability of commanders to enforce good order and discipline—thereby weakening their ability to fight and win wars—it would, ironically, result in fewer cases also going to court-martial, and more sexual assault victims not receiving justice.

It’s structured so that those in charge, commanding officers, can carry out the orders of their civilian leaders. Ultimately, it’s structured to fight and win wars. Gillibrand, and others who support her twice-failed bills, clearly do not understand the difference between the two similar-sounding—but radically different—systems of justice.

As an aside, it’s worth noting that female college students have a 51% greater chance of being sexually assaulted than college-age women serving in the military.

As a former military commander in charge of training and leading soldiers in peacetime and war (Spoehr), and a former military lawyer who prosecuted, defended, and has even been a military trial judge in sexual assault cases (Stimson), we have seen this issue up close and personal.

And that’s why we are even more convinced that the bill, although well-intentioned (i.e., to cut down the number of sexual assaults in the military), is destructive policy and will have the opposite effect if passed and signed into law.

The bill received new emphasis after the results of an investigation into the horrific death last year of Spc. Vanessa Guillen at Fort Hood, Texas. The Army formed a team to investigate her death and the circumstances surrounding it, and the resulting investigation found “major flaws” at Fort Hood that allowed a climate of sexual harassment and assault to develop.

More than a dozen officials were fired or suspended as a result. Significantly, the investigation found Guillen had been sexually harassed prior to her death.

The flaws discovered at Fort Hood persuaded many lawmakers that radical change was necessary.

Gillibrand’s multiyear efforts to remove commanders from the justice system, which had been previously rejected by two administrations and Congress, were suddenly met with a warmer reception.

The proposal was also broadened, so that not just sexual crimes were to be taken away from commanders, but decision-making for all serious crimes was now to be given to military lawyers.

All this might make some sense if indeed it was the military justice system that was to blame for the number of sexual assaults and harassment cases in the military. But it isn’t.

In fact, the military justice system does a respectable job of obtaining convictions compared with some of its civilian counterparts. The conviction rate in the military is eight times higher than that of Gillibrand’s state of New York, for example.

Just to be clear here: We, too, are troubled by the amount of sexual assault in the military and do not think the military justice system is perfect.

We also think that there are worthwhile reforms (such as some that have passed, but aren’t yet fully implemented, from the 2016 Military Justice Improvement Act) that Congress should consider, as explained below.

But moving responsibility from commanders—experienced men and women closest to their units—and transferring it to a distant military lawyer for decision-making undermines the very essence of the military justice system and will have negative secondary and tertiary effects.

If commanders lose the ability to administer justice, how can we hold them accountable when things go wrong and they should be held to account?

The Gillibrand scheme seems to have the backing of President Joe Biden and Defense Secretary Lloyd Austin, both of whom have both expressed support for taking commanders out of the process for prosecuting sexual assaults and harassment.

This radical departure would not solve the issue of sexual assault in the military and would make matters worse.

As we have explained elsewhere, the reason this would make matters worse is quite simple. Commanders—that is, those in charge of leading men and women in the armed forces—are not lawyers. By the time they reach command, they have made innumerable decisions that effect the daily training, education, and combat readiness of others, and have had those decisions tested over the 20 years (or more) it took to become a commanding officer.

They were advised by intelligence officers, military lawyers, and other specialists. But ultimately, they had to make the call, and lead.

When someone under their command is suspected of committing a crime, they, and they alone, must have the authority to enforce good order and discipline, and they must decide what to do about the misconduct (if it occurred).

They decide—based on an investigation and advised by a military lawyer (a member of the JAG Corps)—whether the misconduct rises to the level of a criminal offense, and if so, what to do about it.

If the commander is convinced the misconduct is criminal in nature, and a possible violation of the Uniform Code of Military Justice, then the commander sends the case to a preliminary hearing (called an Article 32).

At the Article 32, independent military prosecutors argue to the JAG officer presiding over the preliminary hearing (called the “preliminary hearing officer,” akin to a judge) that there is probable cause to think that this service member committed these crimes.

The accused, who enjoys the presumption of innocence, is represented by a military JAG officer (free of charge), a civilian defense attorney, or both.

The preliminary hearing officer, after reviewing the evidence and listening to arguments from the prosecution and defense, writes a report in which he recommends to the commanding officer (called the “convening authority”) whether there is probable cause as to each and every charge, whether the charges are appropriate, and what type of court-martial (if any) the accused should go to.

Then, the commanding officer, a non-lawyer, after consulting with his or her own JAG, can decide to send the case to a court-martial or not, even if the preliminary hearing officer found no probable cause, or even if the facts are not that strong against the accused.

Why? Because commanders have a duty to enforce good order and discipline in their ranks, and may want to send a case, even a weak case, to a court-martial in order to send a message to his or her subordinates that this type of behavior will not be tolerated.

As nonlawyers, commanding officers are not bound by a state bar (lawyers) ethics rules, and thus are free to send cases, even really weak cases, to trial, regardless of the outcome.

If the Gillibrand-Biden-Austin scheme becomes law, then JAG lawyers, not commanders, would be the ones who would decide if a case should go to trial. And since all JAG lawyers are members of at least one state bar, and thus subject to their bar ethics rules, and other rules applicable to prosecutors, far fewer cases would go to trial.

Why? Because a prosecutor cannot send a case to a trial unless there’s probable cause and there’s a reasonable likelihood of success on the merits (i.e., a good chance that they will win at trial). So, the result will inevitably be that cases that went to trial when commanders were in charge won’t go to trial when JAG attorneys are forced, by law, to make the decision.

Fewer victims will see their cases going to trial. More service members will escape courts-martial, and commanders will be relieved of the responsibility to enforce good order and discipline in their commands, undercutting their authority, ultimately, to fight and win wars.

Rather than go down that path, it would be far more prudent to adopt the changes that we advocated in 2013 and that the Biden-Austin report “Independent Review Commission: Sexual Assault in the Military” recommended this year. Require the services to establish career litigation tracks for prosecutors, defense counsel, and military investigators.

This isn’t a novel or unique idea in the civilian practice of criminal law. In fact, it has been the norm and practice for decades. Career prosecutors know how to investigate, try, and win complicated cases, including sexual assault cases. Part-time, inexperienced prosecutors (like military JAGs) don’t.

Yet, when we proposed it back in 2013, and two congressmen picked up on our idea and crafted an amendment to the National Defense Authorization Act requiring the services to establish career tracks for JAG prosecutors and defense attorneys, it was shot down by Capitol Hill staffers.

The independent review commission was blunt, as we have been for eight years, about why this is necessary; namely, that the “lack of experience is the Achilles’ heel of the military justice system.”

Furthermore, echoing what we said almost 10 years ago, the independent review commission said that the lack of career litigation billets in the services’ JAG Corps results in attrition. JAGs who want to be career litigators and spend the bulk of their careers in the courtroom (as a prosecutor or defense attorney) leave the military because they won’t get the trial experience—or time in the courtroom—that they know they will get every day as a deputy district attorney or deputy public defender in a large city.

When Congress passed the Military Justice Improvement Act of 2016, it was the most comprehensive overhaul of the military justice system in decades. Many parts of that massive bill focused on improvements to how sexual assault victims were to be treated, and services they were entitled to. Many of those changes have only recently come into effect.

But radically upending the military justice system by stripping commanders of the ability to enforce good order and discipline is not the answer.

Rather, enacting legislation requiring the services to establish career tracks for JAG prosecutors and defense lawyers is the more prudent way forward, bringing the military justice system in line with the professionalism that exists in the civilian world.

That way, victims and defendants alike will benefit from experienced attorneys who know how to handle their cases and work for justice on a full-time basis.