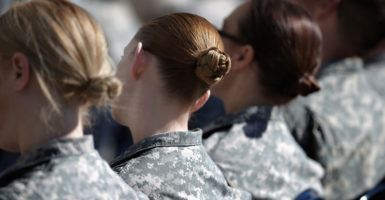 It’s important that we get military sexual assault policy correct for the sake of justice and efficacy of the armed forces.

The role of commanders in the military justice system is unique, as I’ve written in the past, and they play a critical part in addressing the issue of sexual assault.

The House Armed Services Committee will hold a hearing on the commander’s role in sexual assault cases Tuesday.

Sen. Kristen Gillibrand’s, D-N.Y., radical scheme to strip commanders from the process would result in fewer cases going to court-martial, and possibly result in more sexual assaults in the military.

Incidents of sexual assaults are a real and recognized problem in the military, on college campuses, and in civilian life. Every sexual assault is wrong, wherever it happens.

Military sexual assault is detrimental to morale, destroys military cohesion, shows disrespect for the chain of command, and damages the military as a whole.

As a lawyer who worked as a military and civilian sexual assault prosecutor, I know the differences between the two systems, and how each is unique.

It’s clear that commanding officers are the key—not the problem—to enforcing good order and discipline and tackling the issue of military sexual assault.

They, and they alone, must retain the ability to refer suspected criminals to a court-martial for sexual assault or any crime. Removing commanders from that process would weaken the military and result in fewer suspected sexual assaults being prosecuted, not more.

The military justice system is integral to the military’s mission. It is unique, and for good reason.

Unlike the civilian justice system, which exists solely to enforce the laws of the jurisdiction and punish wrongdoers, our military justice system exists in order to help the military succeed in its mission: to defend the nation.

It is structured so that those in charge—commanders—can carry out the orders of their civilian leaders.

Maintaining good order and discipline in the armed forces is essential to accomplishing the mission.

Despite what opponents of the current military justice system say, Congress and the military have made huge strides in the last decade on confronting the issue, and those efforts have created a system that is structured to provide complaining witnesses options and resources not available in the civilian criminal justice system.

In 2016, the Military Justice Review Group studied the entire military justice system, and made sweeping recommendations for change.

That action resulted in the Military Justice Act of 2016, which represents the most significant overhaul of the military justice system in decades, and it provides robust protections to all victims, profound changes to the system as a whole, and borrows from best practices in the civilian criminal justice system.

Rather than reporting the assault to their chain of command or the military police, victims who choose restricted report route provide confidential information to a sexual assault response coordinator, a victim advocate, or a health care provider.

There is no civilian equivalent to a restricted report, although states are free to adopt them, and should take a hard look at doing so.

Victims of sexual assault in the civilian criminal justice system work closely with the prosecutor and often a victim witness coordinator employed by the prosecutor’s office.

This system works well in the civilian context, as it affords the prosecutor the ability to assess the strength of the case (by in part, assessing the victim’s narrative), develop a bond with the victim, and inform the victim (with the help of the victim-witness advocate) of the various steps throughout the case.

In the military justice system, Congress mandated special victim’s counsel (also called victim’s legal counsel, or VLC) to be provided to all victims of sexual assault.

As such, the Air Force started, and Congress eventually mandated, the creation of VLCs, who are JAG lawyers specifically assigned to victims of sexual assault. VLCs help victims understand the “investigation and military justice process, guard their legal rights and interests and obtain additional support in accessing resources.”

VLCs are provided to victims free of charge. The Department of Defense implemented the VLC program, with specific guidance to all departments, back in 2014.

Opponents of the current system include Gillibrand and a small number of outside groups, including Don Christensen of the military justice reform organization Protect Our Defenders. They cling to notion that the military is simply incapable of addressing military sexual assault unless commanding officers are removed from the process and the decision of whether to prosecute a case is handed over to an “independent” military prosecutor.

In the military, prosecutors and defense attorneys do not work for the command of the accused or the convening authority. Rather, they report to the senior prosecutor or senior defense counsel in the area. In that sense, they are already independent.

Under current law, commanders decide whether to send someone to a court-martial (by “referring” a case to court-martial), and decide on the charges that should be brought against the accused.

Another implicit assumption underlying this proposal is that military prosecutors would routinely file charges in military sexual assault cases that convening authorities today refuse to refer to court-martial. That assumption is also incorrect.

These cases are rejected not because they are military, but because, based on these prosecutors’ experience and internal charging guidelines, the cases are poor candidates for prosecution.

Oftentimes, there is either no evidence of a crime at all or the evidence is so weak that there is no reasonable likelihood of success on the merits.

Under the current system, some of these cases, in which civilian career prosecutors would not even indict, are nevertheless referred to court-martial in the military. Some of those cases, which are nevertheless referred to court-martial, result in a not guilty finding. There are instances where a convening authority refers a case to court-martial against the advice or recommendation of legal counsel or investigating officers in cases where civilian professional prosecutors have shown little or no interest.

Ironically, if the Gillibrand/Christensen scheme were to become law, fewer cases would be referred to court-martial because military prosecutors, like their civilian counterparts, would only press charges in cases where the prosecutor thinks he can prove the case beyond a reasonable doubt. Commanding officers, non-lawyers, can send cases to court-martial if there is probable cause, a much lower standard.

Former Sen. Claire McCaskill of Louisiana and former Rep. Loretta Sanchez of California—both Democrats—wrote in a 2013 USA Today op-ed that the Gillibrand scheme is “ … a risky approach for victims—one that would increase the risk of retaliation, weaken our ability to hold commanders accountable, and lead to fewer prosecutions.”

McCaskill and Sanchez supported their conclusion by pointing out that handing the decision to refer cases to courts-martial to “outside lawyers will never carry the broad authority and legitimacy of a military commander within a unit, or [be able to understand] the close grasp of the culture and discipline” of that particular unit.

Sen. Martha McSally, R-Ariz., who recently bravely admitted she was raped when she was a junior officer in the Air Force, agrees that commanders are key to addressing the issue.