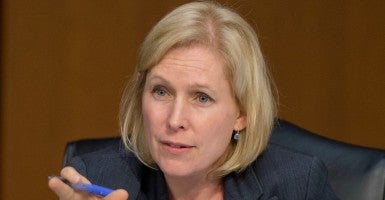 The JAGs note that there is no “empirical support” that demonstrates that removing the commander would—as Gillibrand promises—promote the effective and just disposition or prosecution of cases. (Photo: Ron Sachs - CNP/Newscom)

For the third time in as many years, Sen. Kirsten Gillibrand, D-N.Y., is pushing her radical scheme that, if enacted, would render the military justice system unworkable and ineffective.

Don’t be fooled by the false label of her scheme—The Military Justice Improvement Act. In the last two years, she forced a vote on her idea, and in both years, she failed. And for good reason. At its core, her bill would strip commanders of the ability to force good order and discipline in the armed forces.

As we have written before, the military justice system is a unique system of justice, and must be to accomplish its mission. It enables commanders to enforce good order and discipline in their ranks, thus giving them the tools to prepare men and women for war. Strip them of that power, and you deny our armed forces, and the commanding officers that lead them, to train for and win wars. It is that simple.

Her scheme is so dangerous that the top five leaders of the respective services Judge Advocate General’s Corps wrote the chairman and ranking member of the Armed Services Committee yesterday expressing “grave concerns about the [Military Justice] Improvement Act,” stating that the Gillibrand scheme “poses considerable risk to the stability of the military justice system.”

Just as we have highlighted in the past, the Judge Advocate’s General warn that: “removing the commander as the convening authority is serious cases … would separate command authority from authority to discipline service members and hold them accountable and would render the military justice system at best inefficient, and at worst, ineffective.” [Emphasis own]

The judge advocates general note that there is no “empirical support” that demonstrates that removing the commander would—as Gillibrand promises—promote the effective and just disposition or prosecution of cases. Indeed, the congressionally-formed Response Systems to Adult Sexual Assault Crimes Panel studied that very question and concluded—after 19 days of hearing, 240 witnesses, and 15,000 pages of documentation—that commanders, advised by judge advocates, are “best positioned to handle disposition decisions.”

Moreover, the judge advocates general contrasted the “piecemeal” approach of the Gillibrand scheme to the “comprehensive and careful” product of the Military Justice Act of 2016, which we wrote about extensively here.

That act is, as the judge advocates general note in their letter, “premised on the foundational principle of the commander as convening authority,” as is the most “comprehensive and sweeping change[s] to the Uniform Code of Military Justice in over 30 years.”

Finally, Congress has enacted more than 115 provisions affecting the military justice system in recent years. Those changes have given victims more confidence in the system; provided those accused of equally fair rights and procedures; and contributed to service members’ “increased confidence in the military justice system and military leadership,” according to the judge advocates general letter.

Last year, when the Gillibrand scheme came up for a vote, fewer senators voted for it than the year before.

This year, senators have the opportunity to study and support a thorough, comprehensive institutionalization of best practices in the vehicle of the Military Justice Act of 2016. If they do so, they will realize the dangers and folly of Gillibrand’s scheme this year, which should be called the “Military Justice Destruction Act.”