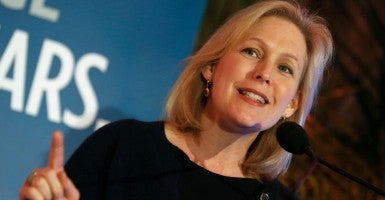 The good news is that the number of sexual assaults in the military is going down. According to the RAND Corporation’s recent study, there has been a 27 percent decrease.

Two years ago, Sen. Kirsten Gillibrand, D-N.Y., pushed a risky scheme that would have stripped commanders of the ability to enforce good order and discipline in their units. Her measure failed, fortunately, and instead Congress passed major reforms to the military justice system. I wrote about those changes, which we supported, here and here.

Those reforms are clearly working, resulting in more victims of sexual assault coming forward to report their crimes, mandatory education for all service members about sexual assault, and more transparency and accountability across the chain of command. It is not perfect, but neither is the civilian criminal justice system.

Despite all that, Gillibrand has proposed the “Military Justice Improvement Act of 2015,” which, if passed into law, would actually harm victims and decrease the number of sexual assault prosecutions.

Why the Military Justice System Is Unique

As I detailed in The Heritage Foundation’s special report entitled “Sexual Assault in the Military: Understanding the Problem and How To Fix It:”

The military exists to defend the nation. That is its mission. To accomplish that mission, leaders must ensure that those who serve under them are combat ready, and once ordered into armed conflict, combat effective. Maintaining good order and discipline in the armed forces is essential to accomplishing the mission.

The United States military justice system is integral to the military’s mission. It is unique, and for good reason. Unlike the civilian justice system, which exists solely to enforce the laws of the jurisdiction and punish wrongdoers, our military justice system exists in order to help the military to succeed in its mission: to defend the nation. It is structured so that those in charge, commanding officers, can carry out the orders of their civilian leaders. Ultimately, it is structured to fight and win wars.

The sponsors of this bill simply fail to understand the reasons the military justice system is unique and structured differently than the civilian criminal justice system. In the military, the commanding officer is the key to enforcing good order and discipline. The commanding officer, who is not an attorney but advised by a military attorney (a member of the Judge Advocate General’s Corps), has a variety of options with respect to handling misconduct of her subordinates.  Those options, as we detailed in our paper, include mild administrative measures, up to and including the ultimate remedy—referral to a General Court-Martial.

Gillibrand’s “Military Justice Improvement Act of 2015,” would, if passed, decrease the number of sexual assault prosecutions.

But unlike her civilian counterparts, who are only beholden to the elected district attorney, a military prosecutor works closely with the commanding officer (called the convening authority) in crafting charges against a potential accused.  This special relationship is one that Gillibrand and others who support this risky, radical change to the military justice system, do not understand or appreciate.

The Military Justice Improvement Act of 2015 would strip convening authorities of the ability to hold to account those suspected of sexual assault, and vest that authority with JAG prosecutors. On the surface, that sounds like it makes good policy sense, since civilian prosecutors make charging decisions everyday as part of their job.

But the reason that radical idea was rejected two years ago by military justice experts—including the first two female judge advocates general of the Navy and Army—is that in reality, it would first, undermine the ability of commanders to protect sexual assault victims in their chain of command; second, result in fewer sexual assault prosecutions; and third, result in a degrading of the ability to enforce good order and discipline in the armed forces.

And those reasons are just as applicable to the latest attempt by Gillibrand to radically upend the military justice system at a time when the reforms put in place a few years ago are showing concrete signs of working.

Convening authorities only need probable cause to believe that the accused committed a crime against a victim to refer that case to a court-martial.  They are not bound by state ethics rules like attorneys are.

That is not a criticism of the military justice system, but rather a unique feature of a system in which non-attorneys—advised by their JAG—make the ultimate decision about whether or not to refer a case to a court-martial. All the convening authority needs to refer a case to a court-martial is probable cause, and thus, more cases go to court-martial because the legal standard—probable cause—is well below the standard a prosecutor is required to use if she were the decision maker about whether to file charges.

In other words, convening authorities send many more cases, including sexual assault cases, to a court-martial than would a prosecutor if the prosecutor was invested with the charging decision.

If the latest Gillibrand scheme were to become law, military prosecutors would be legally required to make charging decisions in sexual assault cases. Those prosecutors, looking at the actual facts of these cases, would file fewer cases.

Many sexual assault prosecutions in the military are the types of cases that would never, ever be brought in the civilian justice system.

As a former military trial judge, and former local, state, and federal and military prosecutor, I know a solid case when I see one. And what I have seen in my 23 years in civilian and military court is that the vast majority of military sexual assault cases are cases that would never even be charged in the civilian justice system.  Ask any civilian prosecutor near a military base, and they will tell you that many, if not most, of these military sex crimes cases are not cases in which charges are filed.

There is a reason the congressionally-mandated Response Systems Panel and the Judicial Proceedings Panel—two independent bodies of experts charged with taking testimony and evaluating ongoing progress with new reforms and making additional recommendations—have supported the critical role of the convening authority in making charging decisions.

That sends a loud and clear message to others in the command that the boss takes allegations of sexual assault very seriously, and dissuades others from committing any misconduct.

If, on the other hand, the commanding officer has to rely on a military prosecutor to make the charging decision in sexual assault cases, then she is stripped of the power to refer a case to a court-martial.

Finally, we come to the issue of retaliation. The Military Justice Improvement Act of 2015 is animated, in part, by a notion that military sexual assault victims are subjected to systemic retaliation for reporting their crimes. Gillibrand, on her website, points to a recent Department of Defense survey in which 62 percent of women who reported sexual assault experienced retaliation.

Again, on the surface, if true, this is an appalling statistic. But if you scratch the surface of the survey, you find that many of those who perceived that they were being retaliated against did so because they were picking up on a change in behavior by fellow service personnel once they reported their crime. That behavior might include not sitting next to the victim at lunch, or not hanging out with the victim for fear of saying the wrong thing or not saying the right thing. That is not evidence of systemic retaliation, but rather normal human behavior by work colleagues who don’t know how or what to say to a victim of a crime.

The military justice system is unique, and needs to be. The reforms Congress put into law two years ago are just now all being put into place. And they are working. Military leaders, civilian and uniformed alike, take sexual assault prevention and reduction extremely seriously.