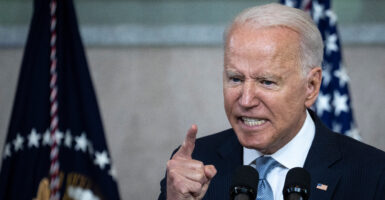 President Joe Biden delivered a speech about voting rights at the National Constitution Center on July 13 in Philadelphia that many observers described as demagogic. (Photo: Drew Angerer/Getty Images)

Republican “anti-voting” laws, President Joe Biden claimed during his demagogic speech at the National Constitution Center in Philadelphia last week, are the most “significant test of our democracy since the Civil War.”

Those laws are “odious,” “pernicious,” “vicious,” “unconscionable,” a “subversion” and “suppression,” the “21st-century Jim Crow,” and the sure sign of an emerging “autocracy.” Biden’s fabricated panic offers lots of space for hyperbole, but precious little room for specifics.

I was prepared to fact-check Biden’s contentions about the new election laws, but the president offered few details. Perhaps he comprehends that most Americans would probably find voter integrity laws rather innocuous.

Biden must also have sensed how preposterous his hyperbole sounded, littering his speech with a bunch of “literally(s)” and “for real(s).” None of the voting laws passed in 17 states—some drafted better than others—comes anywhere in the vicinity of “authoritarian.”

To compare photo ID laws to Jim Crow is to cheapen history. Then again, Biden doesn’t have a problem using Joseph Goebbels’ “Big Lie” formulation, either—the kind of Nazi reference that Democrats pretend to be upset by when used by Republicans.

Not only didn’t we hear much from Biden about how these “autocratic” laws work, but we also didn’t hear much about how HR 1 proposes to save democracy. The closest the president came to offering any specifics was to claim that new voter laws somehow legalize the intimidation of voters and the tossing of legal ballots.

Both of those things, of course, are already illegal.

HR 1, the For the People Act, on the other hand, would force states to count mail-in votes that arrive up to 10 days after Election Day; compel them to legalize ballot harvesting; ban them from having voter ID laws; empower bureaucrats to redraw congressional districts; require states to allow felons to vote; undermine free speech rights by imposing a new array of burdens on civic groups, unions, and nonprofit organizations; force states to count ballots cast by voters who are in the wrong precincts; prohibit election officials from reviewing eligibility of voters; and bar officials from removing ineligible voters from the rolls.

Most requirements found in HR 1 have never existed in most states. So, how could failing to implement them bring us to the edge of the abyss? Biden claimed that those objecting to this new voting regime were a bigger threat to freedom than the Confederacy.

“The Confederates, back then, never breached the Capitol as insurrectionists did on Jan. 6,” the president explained. “I’m not saying this to alarm you; I’m saying this because you should be alarmed.”

For one thing, the notion that the republic was nearly toppled by a mob of unarmed rioters on Jan. 6—or to intimate that what happened that day is on par with a war over slavery that saw 620,000 lives lost—is partisan panic-mongering.

And to insinuate that every legislator passing voter integrity laws is in league with those rioters is a dumb smear.

Then again, Biden’s speech was little more than performative politics. His agenda is stalled. His hyperbole was meant to telegraph to progressive groups that he’s “fighting.” But to pass HR 1, Biden would need to persuade moderate Democrats in places such as Arizona, Montana, and West Virginia not only to hand over local elections to Washington, but also to blow up the filibuster. That seems highly unlikely.

(The filibuster, incidentally, is most useful when slowing efforts such as HR 1, which would nullify local laws and control by nationalizing things like elections.)

The second reason Biden likely gave this speech was to preemptively corrode trust in the 2022 and 2024 elections. Biden spent the first part of his talk bragging about how the United States had just conducted the cleanest election in history, grousing about efforts to undermine trust in our voting system. He then spent the rest of his time doing exactly that.

Many of the Democrats who can’t stop talking about the horrors of former President Donald Trump’s “Big Lie” had no compunction disputing results in Georgia or the presidential election only a few years ago. Now, they are creating a ready-made justification for delegitimizing any Republican victory.

Democrats have won numerous elections across the country and nationally under laws they now claim are authoritarian. They will likely win many more. The fact is that it is easier to vote today than ever before. Any citizen can obtain an ID and request a mail ballot in every state.

No amount of cynically manufactured hysterics changes that fact.