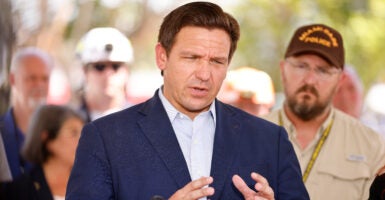 Democratic Govs. Andrew Cuomo of New York, Gavin Newsom of California, and Gretchen Whitmer of Michigan shatter everything they touch. Ron DeSantis, conversely, seems to get everything right. The Florida Republican has emerged as America’s governor.

“We’re standing with our folks. We’re going to do the right thing. We leaned into it, and we stood strong,” DeSantis told Fox News host Tucker Carlson recently.

Rather than snip a tax, kill a regulation, and then doze off, as too many Republicans have done, DeSantis is a tireless, full-spectrum conservative. He has authorized a host of economic, cultural, and law enforcement initiatives that are buoying Florida and transforming him into the Great Right Hope.

• DeSantis’ COVID-19 response enraged the Lockdown Left and cheered pro-freedom conservatives. He shunned mask mandates, was among the first governors to reopen his state for business, continued in-person learning, shielded seniors from COVID-19 carriers (Cuomo did the reverse, and 15,000 elderly New Yorkers died), and delivered below-average infection and fatality rates.

• DeSantis signed legislation that requires prison for rioters. He also penalized cities that defund their police.

• In June, he urged Florida’s state school board to kill critical race theory on campuses. It did—unanimously.

“There’s no room in our classrooms for things like critical race theory,” DeSantis declared, leaping intrepidly into America’s most incendiary controversy. “Teaching kids to hate our country and to hate themselves is not worth one red cent of taxpayer money.”

While DeSantis battles this rattlesnake venom that un-American teachers unions, school boards, and other cultural Marxists are pumping into government classrooms, he also supplies the antidote. “I put in a civics requirement for high schools in 2019,” DeSantis said.

And rather than tear America down, as far-left critical race theory does, DeSantis expanded Florida’s curriculum to include “instruction on the evils of communism and totalitarian ideology.”

“We want all students to understand the difference,” DeSantis told journalists on June 22. “Why would somebody flee across shark-infested waters?” DeSantis asked, referring to Cuba. “Why would people leave these countries and risk their lives to be able to come here? It’s important that students understand that.”

HB 5, the relevant legislation that DeSantis signed, also creates a “Portraits in Patriotism” library that showcases, as he explained, “real patriots who came to this country after seeing the horrors of these communist regimes.”

“Back to East Berlin,” I lamented, as I flew home to Gotham.

Palm Beach and Miami were even livelier in June.

Democrat governors could learn plenty from DeSantis. All of this has helped Florida earn two additional U.S. House seats in the new census, as internal refugees flee Democrat-run states to enjoy freedom, fair weather, and nonexistent state income taxes. They should leave their voting habits behind, lest they elect Democrats who, like termites, would feast on all that DeSantis and the Floridians have built lately.