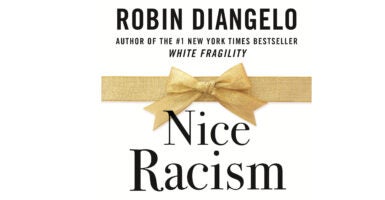 “Nice Racism,” much like the previous “White Fragility,” amounts to a series of anecdotal and carefully framed personal stories showing that despite all the hard work Robin DiAngelo has done, her audience is still committing sacrilege and in desperate need of further education to achieve salvation. (Photo: Penguin Random House)

As the battle over critical race theory heats up around the country, it’s important to examine the thinkers who have done the most to launch the woke revolution on our elite institutions.

Two figures show up more than anyone else.

One is Ibram X. Kendi, director of the Center for Antiracist Research at Boston University and author of “How to Be an Antiracist.” The wildly popular Kendi, who is constantly interviewed by large, mainstream liberal networks and has received millions of dollars from Twitter, proposed a constitutional amendment that would effectively end self-government in America.

The other is Robin DiAngelo, a lecturer and author of “White Fragility: Why It’s So Hard for White People to Talk About Racism.”

In the introduction she explains that her work is aimed at undoing the internalized racist patterns of society. For the record, she cites Derrick Bell—widely recognized as a pioneer of critical race theory—and other leftist scholars in her analysis.

I’m honestly not sure I entirely disagree with the title. Progressive ideas that end in the defunding and abolition of police and the destruction of the nuclear family do cause immense harm.

They certainly aren’t aimed at a broader audience or conservatives who are assumedly nothing but a basket of deplorables beyond redemption.

Opponents of the grand plan are little more than an absurd caricature.

“I am writing this book at a time when white nationalism—the desire for a white ethnostate by and for whites—is on the rise both in the United States and globally,” DiAngelo writes in the first chapter with little explanation or evidence.

No, DiAngelo’s books are miserable self-help guides for upper-middle-class, white, deeply committed progressives who are desperately searching for a way to not be racist in a world where denying your racism is an example of racism.

It’s clear that DiAngelo’s role is to figuratively stand behind her audience and yell “shame!” whenever they unintentionally commit racism. She is here to divine the true meaning of anti-racism and to stamp out heresies wherever she finds them.

“Nice Racism,” much like the previous “White Fragility,” amounts to a series of anecdotal and carefully framed personal stories showing that despite all the hard work she’s done, her audience is still committing sacrilege and in desperate need of further education to achieve salvation.

In one of DiAngelo’s stories, she recounts a discussion she had with a taxicab driver in London who she says expressed exasperation about always being called racist. She writes that he demonstrated “typical white lack of racial curiosity or humility about the limits of his knowledge” because he didn’t ask her, “the author of a New York Times bestselling book,” about her thoughts on the matter.

How dare these blue-collar know-nothings fail to seek the sage wisdom of a New York Times bestselling author! They really need to show more humility.

Perhaps it would be best to simply ignore DiAngelo’s writings.

Unfortunately, that’s becoming hard to do as her work has become immensely popular and highly influential. The countless diversity, equity, and inclusion training sessions and seminars—occurring around the country in boardrooms, college campuses, and government agencies—rely heavily on her work.

I’ve already written a broad outline of what the woke anti-racists believe, but it’s good to get a little more insight into how they think about the world.

Several writers, including Taibbi, have written brilliant and brutal takedowns of DiAngelo’s new book, but here are a few more takeaways I gleaned from “Nice Racism.”

One of the most important takeaways from the anti-racist worldview is that individualism is bad and is a product of white supremacy. If this sounds familiar, it’s because a similar argument was used on the website for the National Museum of African American History and Culture last summer.

The new wokeness demands that you need to always see color or you are a racist.

“Individualism is a deeply imbedded [sic] narrative in Western cultures, and it plays a particularly important role in the maintenance of white supremacy,” DiAngelo writes.

In one of her anecdotal stories, DiAngelo talks about two people who attended one of her lectures, “Sue and Bob,” who didn’t want to be identified with a collective—that is, group identity. She was flabbergasted that after a 45-minute lecture, people still didn’t fathom how being treated as individuals was advancing white supremacy.

She writes that she was left wondering “what happens cognitively for so many white people in anti-racism education efforts that prevents them from actually hearing what is being presented.”

Is it possible that after hearing so many of these stories from even like-minded progressives that there may be something wrong with the thesis, that maybe there is something to treating people as individuals with their own identity and agency? No, it is the people who are wrong.

The problem here, for DiAngelo, is that if you don’t think about and consider race every waking moment of your life, then you are promoting racism. Even the slightest notion that stopping racism is just about stopping individual acts of racism is deeply problematic.

Smiling, yes, smiling can be racist.

DiAngelo explains what this means in an anecdotal story of a friend going to Whole Foods (of course it’s a Whole Foods), and getting sick of all the white people “over-smiling.”

“I have heard Black people talk about the awkwardness of white people ‘over-smiling,’” DiAngelo writes.

“A friend described going to Whole Foods and feeling exhausted by the pressure to validate all of the over-solicitous white people making a point of smiling at her when she just wanted to get her errands done and get home.”

As the reader may notice by looking at my profile pictures, I’m apparently a very bad anti-racist.

White people smiling too much at black people, according to a “social justice consultant” DiAngelo cites, is a legacy of slavery.

“White niceness in the face of racism is a form of the plantation relationship,” the consultant concluded.

“During the enslavement of Africans, white people didn’t have to be nice,” DiAngelo writes. “Black people of course did, but no pretense of niceness was needed on the part of white people. Today that pretense is necessary to some degree, especially in order to qualify as a white progressive. But that doesn’t mean that anti-blackness isn’t simmering just below the surface.”

What would we do without these racism experts telling us that racism is smiling in plain sight?

3. Before You Say or Do Anything, Refer to Anti-Racism Checklist

So what can you do about all of this nice, white racism around you all the time? DiAngelo refers to a checklist that she borrowed from a professor of education. Here’s a small snippet from the lengthy, anti-racist to-do list.

• I continually educate myself about racism and the perspectives of BIPOC [black, Indigenous, and people of color] people.

• I hold awareness of my whiteness in all settings and that awareness guides how I engage.

• I am involved in anti-racist projects and programs.

• I raise issues about racism over and over, both in public and in private.

• I make sure anti-racism is part of the discussion in meetings and project planning.

• I avoid personalizing racial issues as they are raised in conversation.

• I can identify many aspects of racism as they are happening.

• I attend to group dynamics to ensure the inclusion of BIPOC people.

• I support and validate the contributions of BIPOC people.

That is the main takeaway from almost all of DiAngelo’s work. Everything you do is racist. If you want to do something about it you need to buy these books, attend these lectures, pay these consultants, and only then you will have begun the process of purging racism from society.