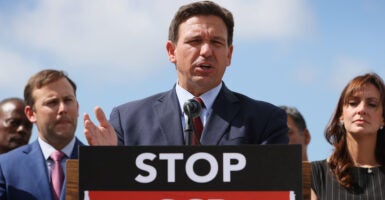 The revolt against indoctrinating students and other Americans with critical race theory is ramping up, despite left-wing denial and opposition.

But a simple reaction against malignant ideas isn’t good enough.

Critical race theory—which frames every issue through the lens of race and the idea that some races are inherently oppressors or oppressed—thrives in a country where civics and historical knowledge is minimal and fewer Americans have any understanding about what their country was founded on.

This is how one truly becomes an informed patriot.

One of the new laws will create a survey to provide a look at viewpoint diversity on Florida’s college campuses, as well as add protections for students’ free speech. Another requires that applicants pass a civics test to enter Florida’s public universities.

The third bill will require public K-12 schools to teach students about communism, totalitarianism, and other political systems that “conflict with the principles of freedom and democracy essential to the founding principles of the United States.”

At a press conference Tuesday after signing the bills, DeSantis explained why it’s so important that citizens not only learn about civics but also the evils of truly oppressive regimes.

“It’s crucial to ensure that we teach our students how to be responsible citizens,” the governor said. “They need to have a good working knowledge of American history, American government, and the principles that underline our Constitution and Bill of Rights.”

To understand those attributes of our free republic, students also must understand the nature of some of the terrible alternatives. DeSantis highlighted how many Florida residents escaped repressive regimes to live in the United States:

We have a number of people in Florida, particularly southern Florida, who’ve escaped totalitarian regimes, who’ve escaped communist dictatorships to be able to come to America. We want all students to understand the difference; why would somebody flee across shark-infested waters, say, leaving from Cuba to come to southern Florida. Why would somebody leave a place like Vietnam? Why would people leave these countries and risk their life to be able to come here? It’s important students understand that.

DeSantis is right. One can’t understand the nature of the United States without having some understanding of the regimes that have stood in opposition to us.

One of the new Florida laws will create a library including information and biographies of the many people who escaped totalitarian regimes and made it to the free shores of our country.

Some on the left appear to be angry at DeSantis for signing this legislation into law.

Even deep-blue California, however, has a law on the books saying: “No teacher giving instruction in any school, or on any property belonging to any agencies included in the public school system, shall advocate or teach communism with the intent to indoctrinate or to inculcate in the mind of any pupil a preference for communism.”

California legislators passed the legislation in the 1970s, though it doesn’t appear to be enforced. But the law shows a clear precedent for ensuring that students aren’t indoctrinated in a radical ideology aimed at overthrowing the American way of life.

During the Cold War, Americans became all too aware of the evils of communism. The Soviet Union was spreading its awful influence around the globe, turning millions into little more than slaves to a ruthless and predatory state. The threat was impossible to ignore.

The sad reality is that many young Americans have learned little about the evils of communist dictatorship.

A 2016 poll commissioned by the Victims of Communism Memorial Foundation, for instance, found that about a third of millennials surveyed thought that former President George W. Bush had killed more people than Soviet dictator Josef Stalin. Nearly a majority never had heard of notorious figures such as Mao Zedong, Che Guevara, and Vladimir Lenin.

The collapse of the USSR was not the end of history. American notions of freedom may have triumphed for a time, but the fallen nature of man ensures that reemergent tyranny is always a possibility.

For all of America’s faults, it undeniably has been a bastion and a land of hope for free people. Those who have fled communism understand this all too well, but it’s essential that young Americans who never have experienced it—and God willing, never will—gain an understanding of what it is, too.

Today, the rise of Communist China—a regime that ruthlessly represses its citizens and systematically suppresses the truth—is a reminder that the threat of totalitarianism remains in this world.

Totalitarianism could come to our shores, too. Let us hope that future generations can recognize its evil as well.