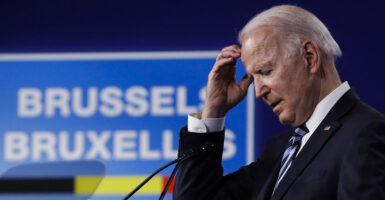 President Joe Biden would take money from every American Catholic with a taxable income and use some of it to fund what the church describes as murder. Pictured: Biden speaks during a June 14 press conference after the North Atlantic Treaty Organization summit at the NATO headquarters in Brussels. (Photo: Olivier Hoslet/Pool/AFP/Getty Images)

St. John Paul II—speaking for the Catholic Church—stated plainly that abortion is murder.

“The moral gravity of procured abortion is apparent in all its truth if we recognize that we are dealing with murder and, in particular, when we consider the specific elements involved,” he wrote in “Evangelium Vitae.”

“The one eliminated is a human being at the very beginning of life,” he said in this encyclical. “No one more absolutely innocent could be imagined.”

John Paul then condemned murder by abortion as an act that is illicit in all circumstances.

“I declare that direct abortion, that is, abortion willed as an end or as a means, always constitutes a grave moral disorder, since it is the deliberate killing of an innocent human being,” he said. “This doctrine is based upon the natural law and upon the written Word of God, is transmitted by the Church’s Tradition and taught by the ordinary and universal Magisterium.

“No circumstance, no purpose, no law whatsoever can ever make licit an act which is intrinsically illicit,” he said, “since it is contrary to the Law of God which is written in every human heart, knowable by reason itself, and proclaimed by the Church.”

President Joe Biden, who calls himself “a practicing Catholic,” knows this.

As this column has noted before, Biden stated in his 2012 vice presidential debate with then-Rep. Paul Ryan: “I accept my church’s position on abortion as what we call de fide doctrine. Life begins at conception. That’s the church’s judgment. I accept it in my personal life.”

However, it is not merely the “church’s judgment” that life begins at conception. It is a biological fact.

As this column has also previously noted, Biden sent a letter to a constituent in 1994 unambiguously stating his opposition to taxpayer funding of abortion.

“I will continue to abide by the same principle that has guided me throughout my 21 years in the Senate: Those of us who are opposed to abortion should not be compelled to pay for them,” Biden wrote. “As you may know, I have consistently—on no fewer than 50 occasions—voted against federal funding of abortion.”

When Biden ran for president in 2020, he took the opposite position. He not only favored legalized abortion on demand, but also forcing taxpayers to pay for this form of murder—through both Obamacare subsidies and getting rid of the Hyde Amendment that prohibits Medicaid funding of most abortions.

“Vice President Biden supports repealing the Hyde Amendment because health care is a right that should not be dependent on one’s zip code or income,” said Biden’s campaign website. “And, the public option will cover contraception and a woman’s constitutional right under Roe v. Wade.”

After Biden was elected, Cardinal Wilton Gregory, archbishop of Washington, D.C., expressed the hope that he could engage Biden in “a conversational relationship.”

Biden sent a budget to Congress last month that did not include the Hyde Amendment, and, thus, would allow federal funding of abortion.

Biden is not engaging in a conversation with fellow Catholics; he is engaging in coercion.

Archbishop Salvatore Cordileone of San Francisco issued a statement last month explaining what he believes the church must do when such a conversation fails.

“We must never lose sight of this fact: In the last 50 years, in the United States alone, 66,000,000 babies have been murdered in their mothers’ wombs,” he said.

The archbishop then went on to cite a letter then-Cardinal Joseph Ratzinger sent to American bishops 17 years ago. At the time, Ratzinger was head of the Congregation for the Doctrine of the Faith.

“In his letter, Ratzinger confirmed that consistently advocating for abortion and euthanasia constitutes formal cooperation in grave sin, and that bishops must dialogue with Catholics prominent in public life who do so in order to help them understand the grave evil they are helping to perpetrate and accompany them to a change of heart,” said the archbishop.

He goes on to say in that letter that, if these dialogues prove to be fruitless, then, out of respect for the Catholic belief of what it means to receive Holy Communion, the bishop must declare that the individual is not to be admitted to Communion.

Members of Congress, exerting their constitutional power of the purse, should respond to Biden by prohibiting federal funding of abortion.

If Biden vetoes appropriations bills to try to coerce Congress into funding what the Catholic Church correctly calls murder, Americans should force Biden to try to explain—which, of course, he cannot—how any state has the authority to force its citizens to pay for the slaughter of innocent children.