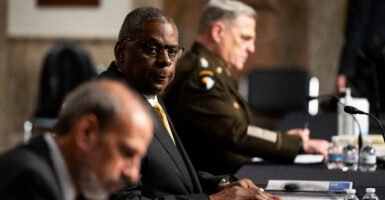 Jason Beardsley, a Green Beret and Navy veteran, represents veterans, active-duty sailors and their families as executive director of the Association of the United States Navy.

Proponents of wokeness have pulled a fast one on all of us.

They say they want the same things we want, such as ending racism and extremism. What they don’t say out loud is that they hope to get there not by building some beautiful new society, but by destroying everything in its path.

The Navy is one of the battlegrounds where wokeness is looking for a toehold, and sadly, it’s succeeding.

An internal June 4 Navy memo that was leaked revealed the Navy’s plans for fiscal year 2023. Those plans said the Navy “cannot afford to simultaneously develop the next generation” of jets, ships, and submarines.

So, how will the Navy get around the problem? Pick one of those priorities and “re-phase” the other two.

The Navy will also start shrinking its onshore facilities and scrub the development of a sea-launched nuclear cruise missile, a weapon called for in the last Nuclear Posture Review.

The Navy seems to know that the Biden administration won’t be pushing for an upgraded fleet anytime soon. As a result, our men and women at sea won’t be fighting on the most advanced planes, ships, and submarines for the foreseeable future.

There goes a critical component of military readiness.

So, what is the Navy focused on?

The same memo says the Navy will “provide funding and manpower necessary” for “Diversity, Equity, and Inclusion” programs. Tellingly, those programs are the only ones the memo says are “critical to the readiness of our Navy.”

Cutting-edge ships and missiles that America has the capacity to produce are apparently optional, and the new administration appears to have no plans to fight for them. But at least the military will be diverse.

In the same week that memo was reported, the Navy announced the details of its new policy that allows transgender people to serve and to transition from one gender to another while serving. In this policy, the Navy again willingly trades readiness away, and worse, it admits that morale and discipline of the command may also be at risk.

Specifically, it requires commanding officers who receive a request from a sailor to approve a gender transition plan while “minimizing impacts to the mission (including deployment, operational, training, and exercise critical skills availability), as well as to the morale, welfare, good order, and discipline of the command.”

The Defense Department is further depressing morale by force-feeding our soldiers, sailors, airmen, and Marines that America is “inherently” racist.

Sen. Tom Cotton, R-Ark., is collecting such stories from our service members, and he says a Marine told him that military history training was replaced with a lecture on white privilege and systemic racism. That same Marine said several officers will leave the unit as a result.

One sailor told him, “The Navy thinks my only value is as a black woman.”

Wokeness is well on its way to poisoning our military, even as it claims the military is moving toward utopia. But in America, there’s always reason for optimism, and one of those reasons surfaced last week.

Most of us recognize that America is working harder than any other nation on Earth to unite people behind the idea that you can be whatever you want to be here. We aren’t perfect, of course, which is why the Founders talked about building a “more perfect” union instead of destroying everything around us if we fall short of perfection.

At a June 10 hearing, one man said he still recognized the beauty of America. He told members of the Senate Armed Services Committee, “I don’t believe [the military] is a fundamentally racist organization” and said service members should not be treated differently based on their race or sex.

Then he “absolutely” agreed that the military has been a place of diversity for decades, and that race and sex should not be determining factors when combat leaders are selected. He added that American troops should report any issues up the chain of command if they are being taught that the military is racist.

That man was Defense Secretary Lloyd Austin. We can only hope the Pentagon is listening.