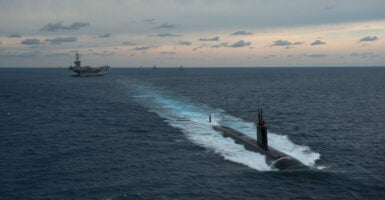 Americans who want to better understand the complex threats the United States faces might assume that they need to read at least several books to get the full picture.

Indeed, the landscape is complicated. The range of threats today includes cyber, space, nuclear weapons, artificial intelligence-guided weapons, and robots; not to mention the more traditional areas of sea, air, and land conflict.

Fortunately, a noted national security leader has done the hard work of synthesizing the most important knowledge about America’s military challenges into a single trenchant volume.

Ambassador J. William Middendorf, former secretary of the Navy and a member of The Heritage Foundation’s board of trustees, has published “The Great Nightfall: How We Win the New Cold War.” The book, which may  be pre-ordered now, will ship in October.

Now 95, Middendorf brings to bear the experience and insight of his storied career to neatly summarize some of the most pressing issues of today. Readers who want to better understand China’s Belt and Road Initiative, compare the Chinese navy’s destroyers with their U.S. counterparts, or examine state-of-art anti-satellite weapons—among other topics—will find what they are looking for in these pages.

No one is better than Middendorf in putting these issues in perspective because he has “been there and done that.” He served in the Navy in World War II, became U.S. ambassador to the Netherlands in 1969, and became secretary of the Navy in 1974.

As Navy secretary, he brought the Trident missile, the Ohio-class submarine, the Aegis missile system, and the F-18 fighter to the fleet.

The book relies heavily on Heritage Foundation research and scholarship, especially the Index of U.S. Military Strength. The index was an ideal reference, since it is updated every year with the latest information and assessments of the threats facing the nation from some of the leading researchers in the nation.

But Middendorf doesn’t stop there. Other experts, such as Bryan Clark, a well-respected former Navy destroyer captain, now a research fellow at the Hudson Institute, or David Ochmanek at the Rand Corp., and dozens of other leading scholars, are quoted frequently.

At the outset, Middendorf declares that his purpose for writing this book “is not a call for war,” but to better prepare for war should it occur. “The best way to prepare for war is to be prepared to win it,” he writes.

He pulls no punches in stating what the correct level of preparation will take:

The force we need will not come cheaply, but the costs of weakness and complacency are far greater. The costs of failing to meet America’s crisis of national defense and national security will be measured in American lives.

Even though Middendorf is an expert, the book has a delightful absence of acronyms and doesn’t assume that a reader brings a wealth of defense knowledge to the subject. It is easily accessible for the layman with a basic understanding of military issues.

Sentences flow smoothly. Maybe it’s just me, but often I find myself rereading paragraphs of a book to try to figure them out. That didn’t happen with this book.

Tidbits of new knowledge abound. You’ll learn that China has more than 700 companies on our stock and bond markets or capital markets.

The book asks some hard questions: Are most Americans aware that their investments are possibly indirectly financing Chinese concentration camps?

Russia is not overlooked in this book. Middendorf describes how Russian President Vladimir Putin has deliberately modernized his armed forces with new missiles, submarines, and nuclear weapons, including nuclear sea-launched cruise missiles—the latter being a capability the U.S. does not possess.

Nor does he ignore the potential for a nuclear exchange between India and Pakistan, with Pakistan possessing the fastest growing nuclear arsenal in the world.

The book reflects the author’s deep knowledge of maritime operations, and although land and air operations are discussed, it’s when he comes to the Navy that the book blossoms. His chapters on maritime affairs cover Chinese aircraft carriers, anti-submarine warfare, sea-mine warfare, and even the ill-fated USS Zumwalt—the Navy’s proverbial ship without a mission.

Our republic functions best when our citizens are knowledgeable—and able to communicate with their representatives on an informed level—about the threats to our nation. Matters of national defense are too important to leave to the denizens of Washington. This book fulfills an important role by allowing interested Americans to understand complex matters of our security.

Why, you might ask, would an accomplished leader like Ambassador Bill Middendorf, at age 95, choose to write such a book rather than enjoy his well-earned retirement?

Middendorf provides us the answer when he writes, “A society grows great when old men plant trees whose shade they shall never sit in.” This book is Middendorf’s gift (as well as a warning and a charge to be vigilant) to the next generation.

In creating this book, he has done his country a service.