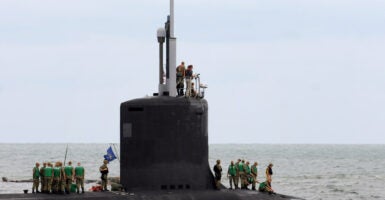 Crew members stand aboard the USS Indiana, a nuclear-powered Virginia-class fast-attack submarine, as it departs Port Canaveral, Florida, on Oct. 1, 2018, on its maiden voyage. It was the Navy's 16th Virginia-class submarine. (Photo: Paul Hennessy/NurPhoto/Getty Images)

The future of the United States depends on our ability to meet the military challenges coming from China, Russia, North Korea, and Iran in this turbulent 21st century.

According to The Heritage Foundation’s recently published 2021 Index of U.S. Military Strength, the U.S. military is only marginally able to meet the demands of defending America’s vital national interests.

The index is an authoritative and comprehensive assessment of America’s military power, the operating environments around the world relevant to America’s vital national interests, and the threats posed to the United States by our adversaries.

The Navy is rated as “marginal,” but is trending toward a “weak” rating because the Navy needs 400 ships to meet demand and currently has a fleet of 300 aging ships and overstretched shipyards inadequate to defend the nation’s interests.

The Marine Corps also received a “marginal” rating in the 2021 index, an improvement from its 2020 index rating of “weak.” However, the higher rating was achieved not because of major systemic improvements, but because the index lowered the scoring criteria to account for the Marine Corps’ recent decision to focus its efforts on the Indo-Pacific region.

The Army represents a mixed bag, receiving an overall “marginal” rating, but a weak rating for “capacity,” because it can only field 35 of the 50 brigade combat teams necessary to defend American interests.

The Air Force’s capability score is rated as marginal because of a shortage of pilots to generate the amount and quality of combat air power needed to meet wartime requirements.

Conventional wisdom dictates fighter pilots should receive an average of three or more sorties a week and 200 hours of flight time per year to develop the skill sets needed to survive in combat.

Even with greatly improved maintenance, manning, and experience levels, average monthly sorties and flying hours have not reached those thresholds.

Since the inaugural 2015 Index of U.S. Military Strength, The Heritage Foundation has documented a number of shortfalls in U.S. military strength, only some of which have been corrected by the additional funding provided by the current administration.

The 2021 index makes clear that America’s military power is insufficient to defend America’s interests and partners in a conflict involving multiple fronts around the globe.

While our adversaries have spent the past two decades investing in their forces and taking advantage of rapidly advancing technologies, America has been forced to choose between solving a future crippling readiness crisis and investing in modernizing the force to compete. We can no longer settle for one of the other. We must do both.

Russia has violated the borders of nearby nations while it expands its nuclear arsenal and submarine force. It continues to prioritize the rebuilding of its military and funding for military operations abroad.

Russia uses its energy position in Europe, along with espionage, cyberattacks, and information warfare to exploit vulnerabilities, and seeks to drive wedges into NATO.

Russia has patched up differences with China, and now the two burgeoning naval powers are holding joint fleet exercises in the Baltic Sea.

The international community has long tried and failed to moderate North Korean behavior and bring about political and economic reform by offering concessions to Pyongyang. With its active and growing ballistic missile capabilities, North Korea poses definite threats to the United States, in addition to contributing to the general threat of war in Asia.

Iran represents by far the most significant security challenge to the United States, its allies, and its interests in the greater Middle East.

Tehran’s open hostility to the United States and Israel, and its sponsorship of terrorist groups such as Hezbollah pose the greatest threat to U.S. citizens at home and abroad.

Iran remains a major threat to Saudi Arabia and other members of the Gulf Cooperation Council, including Bahrain, Oman, Qatar, and the United Arab Emirates. It also threatens to close the Strait of Hormuz, the jugular vein through which most Gulf oil exports flow to Asia and Europe.

Tehran boasts an arsenal of Iranian-built missiles based on Russian and Chinese designs that pose significant threats to oil tankers as well as to warships.

With a prospective Biden administration’s expected emphasis on social programs over defense spending, the greatest concern may be the slowing down or the cancellation of what has been the emphasis in increasing the Navy’s submarine fleet to meet current threats and fulfill major national security strategies.

Some $9 billion in appropriations were recently approved for building the first two ships in the new Columbia-class ballistic missile submarines. Current plans call for 12 of those submarines to replace the 16 Ohio-class submarines, some of them now well over their planned life spans.

Still packing 70% of the U.S. nuclear retaliatory capability, the Columbias will be far stealthier and electronically superior to the Ohios. But already there have been calls in Congress to reduce the new class to as few as six to eight ships. Any reduction would be a mistake with potentially catastrophic consequences.

As to the Navy’s fast-attack submarine force, there are now 40 deployable boats of the older Los Angeles and newer Virginia classes, far fewer than the number needed. There is a proven need for at least 60, and estimates are that essential missions would require at least 100.

As the Los Angeles-class submarines retire, some of them well beyond their planned life spans, a build rate of two Virginia submarines a year is in place. Canceling one a year would “free up” $3 billion, but it would be a major blunder.

With the Navy’s carriers kept 1,200 miles off mainland China by the combination of the short range of carrier airwings and China’s long-range anti-ship missiles, attack submarines may be the only practical way of threatening targets on the Chinese mainland. But currently only two or three would be available.

Others are urgently needed for tracking Russian ICBM subs, carrying out missions in the Middle East, and escorting carrier battle groups.

“We hope this report card on the U.S. armed forces helps decision-makers to be better informed and helps citizens to hold their elected representatives accountable for providing adequately for our nation’s defense,” Heritage Foundation President Kay C. James said when releasing the report, adding:

We can all play our part in ensuring that America’s founding promises of peace, prosperity, and freedom remain promises kept—both for this generation and for generations of Americans yet to come.