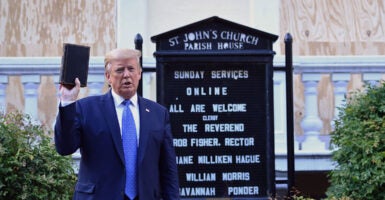 “A narrative we thought we knew is not the reality.”

That sentence, uttered this week by NBC News national security reporter Ken Dilanian, could be applied to any number of long-standing “accepted as fact” news stories in the Trump era that later proved false. But in this case, Dilanian referred to a specific media narrative falling apart.

Last June, U.S. Park Police dispersed protesters in Lafayette Square, a park just north of the White House. Shortly thereafter, President Donald Trump walked from the White House through the park to St. John’s Church, which had been set on fire by protesters the night before.

Trump’s message was that he would not tolerate lawlessness in America’s capital city, or any other place in the country.

Reporters seized on the sequence of events and immediately declared that the park had been cleared on June 1, 2020, expressly to make Trump’s trek to the church possible. The conclusion was unanimous among the corporate media.

“Protesters Dispersed With Tear Gas So Trump Could Pose at Church,” screamed The New York Times.

“How the clearing of Lafayette Square made the White House look a bit more like the Kremlin,” opined The Washington Post in an “analysis” piece.

All of the raging by the elite media had its desired effect.

Political data scientist David Shor confirmed the impact in the lead-up to the 2020 election, saying last July that the episode was “when support for [Joe] Biden shot up and it’s been pretty steady since then.”

The problem is that the narrative was wrong, and now we know it.

The inspector general at the Interior Department on Wednesday released the findings of an extensive investigation, which determined that federal officers had “cleared the park to allow a contractor to safely install antiscale fencing in response to destruction of federal property.”

Inspector General Mark Lee Greenblatt wrote that Park Police officials “made those decisions and had begun implementing the operational plan several hours before they knew of a potential presidential visit to the park, which occurred later that day.”

Greenblatt concluded that the evidence “did not support a finding” that the park had been cleared so that Trump could walk through it.

That’s one enormous media narrative, previously held up as incontrovertible, biting the dust.

But that was not the only black eye the media sustained in just the past few days.

Many will remember the controversy surrounding Trump’s promotion of the drug hydroxychloroquine—in use to treat malaria for 65 years—as a possible benefit to COVID-19 patients. As is the case so often, the media summoned mass outrage because if Trump was saying it, it had to be wrong.

Like-minded news outlets, such as The Washington Post, The New York Times, The New Yorker, and NBC News, declared the drug to be “dangerous” and a potential killer.

NBC went so far as to practically accuse Trump of murder because an Arizona couple ingested parasite chemicals from an aquarium for fish to fight COVID-19, after which the husband died.

As communications director on the Trump 2020 campaign, I had the misfortune of appearing on CNN from time to time when it wanted someone to berate. On one of those occasions, the “conversation” veered to Trump’s optimistic view of hydroxychloroquine.

“It kills people,” the CNN anchor yelled, shortly before cutting off the interview because I allegedly was creating a public health risk for daring to speak the drug’s name.

Take down another false media narrative and put it away.

These two examples are just the latest cemented media positions to crumble recently.

For almost a year, the same news media—en masse—was absolutely sure that the coronavirus did not leak from a laboratory in China, and that anyone who suggested such a thing was a racist, a loon, and a fringe conspiracy theorist.

Suddenly, with Trump out of the White House, the “lab leak theory” is in style, as reporters grudgingly admit that it indeed may be plausible.

The list of media-getting-it-wrong incidents is long and includes the infamous New York Times report that Russia was paying bounties to Taliban combatants who killed American soldiers in Afghanistan. The Times story, based on anonymous sources, claimed that U.S. intelligence officials “concluded” that the Russians had “covertly offered rewards for successful attacks.”

The story set off widespread clamoring for an explanation of why Trump had not responded to protect American troops.

The Trump White House denied any such conclusion had been made, explaining that such intelligence always needs to be vetted and verified before it reaches the level of a briefing for the president.

Nevertheless, the media fury was red hot and provided campaign fodder for Biden, who called it a “betrayal of the most sacred duty we bear as a nation to protect and equip our troops when we send them into harm’s way.”

But here is where we run into a familiar snag with the narrative. The intelligence reported by The New York Times was just what the Trump White House said it was—inconclusive.

The story finally was put down almost a year later, when an administration official said there was “low-to-moderate confidence” in the claims.

Look, reporters are human and they make mistakes.

But we see a disturbing tendency for members of the news media to report the same things, with the same claims and conclusions, all at once, and with great conviction. This is called pack journalism, and it establishes a narrative that is extremely difficult to shake.

Reporters with doubts about a particular story are likely to stifle those concerns out of fear of being the only one to stray from the pack.

No, the press enjoys safety in numbers. It’s the American people who are in danger of being misinformed by the media, which often is wrong but certain of its righteousness.

This article has been corrected to reflect that a study cited looked at the effects when a patient took both azithromycin and hydroxychloroquine.