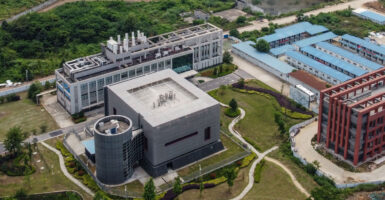 Once declared a conspiracy when espoused by President Donald Trump, the theory that the coronavirus leaked from a laboratory in Wuhan is now openly considered. Pictured: This aerial view shows the laboratory on the campus of the Wuhan Institute of Virology in Wuhan in China's central Hubei province on May 27, 2020. (Photo: Hector Retamal/AFP/Getty Images) 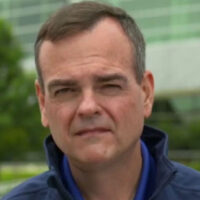 Former President Donald Trump is known for a lot of things, but one of his special powers is his ability to make the entire corporate media act in concert to bring embarrassment upon themselves.

For nearly a year, almost every major news outlet declared that it was a debunked, fringe conspiracy theory to even discuss the idea that the coronavirus pandemic began as a leak from a laboratory in Wuhan, China.

It so happened that Trump was the most visible person pressing the case of the “lab leak theory,” which meant that the media felt compelled to push back extra hard. Now, a year later, the very same news organizations are allowing that the lab leak hypothesis is indeed plausible.

Practically and factually, the only real difference today, versus a year ago, is that Trump is no longer in the White House, so journalists are safe to entertain competing ideas again.

This is as stark a reversal of reporting on a story of worldwide interest as there has been in decades. And it is clearly attributable to the innate need of many in the media to oppose everything Trump did or said, their practice of following each other’s narratives, and their unwillingness to be the one who breaks away from the pack.

CNN’s Chris Cillizza, who once infamously tweeted that journalists don’t choose sides, gave away the game with a piece titled “Anthony Fauci Just Crushed Donald Trump’s Theory on the Origins of the Coronavirus.”

In that May 5, 2020, piece, Cillizza wrote that “Fauci’s view on the origins of the disease matters a whole lot more than Trump’s opinion about where it came from.” And he quoted Fauci from a National Geographic interview in which Fauci threw cold water on the lab leak theory and endorsed the belief that the virus evolved in nature and then jumped to humans.

Case closed, right? The rest of the media certainly thought so.

In an earlier March 2020 story, which was edited more than a year later to make it less strident, Vox wrote that the lab leak theory was “a dangerous conspiracy theory” that “won’t die.” Why exactly it was dangerous to discuss how the pandemic began remains unclear.

Vanity Fair chipped in with an item that included the headline “The Discussion is Basically Over,” regarding the virus origin. This venerable publication ascribed advancement of the lab leak theory to Trump’s “cold war” with China and his desire to implicate the communist government.

None other than The New York Times, in February 2020, blistered Sen. Tom Cotton, R-Ark., for daring to “ask the question to see what the evidence says.” The Times accused Cotton of repeating a “fringe theory” put forward by “those who see China as a threat.” That would, presumably, include Trump.

On that same day, The Washington Post piled on Cotton for “repeating a coronavirus conspiracy theory,” even though he said, truthfully, that “we don’t know where it originated.” The Post suggested it was unnecessary to ask China about the virus’ origin because the lab leak hypothesis had been “repeatedly debunked by experts.”

So, a year later, let’s check in with those “experts” and our friends in the media.

Earlier this month, Fauci was asked if he still believed the virus developed naturally.

“I am not convinced about that,” he said. “I think we should continue to investigate what went on in China.”

Also this month, The New York Times related the position of a group of scientists calling for “further inquiry” into the origin of the virus, since the lab leak theory is one of the explanations that is still “viable.” Again, this is the same newspaper that called such talk by a U.S. senator a “fringe theory” a little more than a year ago.

At CNN, they are now acknowledging that a lab leak is a “possibility” and the theory “reasonable,” while noting a new Wall Street Journal report that several researchers in Wuhan fell ill mysteriously in November 2019. CNN is also now suddenly disturbed that the communist Chinese are curiously uncooperative with investigative efforts.

What about Cillizza, who previously celebrated that Fauci had “crushed” the lab leak theory? Well, now he says, “The origins of the virus remain not fully known.”

And finally, just this week, The Washington Post weighed in with a timeline titled “How the Wuhan Lab-Leak Theory Suddenly Became Credible.” But naturally, it was all Trump’s fault again because his “administration’s messaging was often accompanied by anti-Chinese rhetoric that made it easier for skeptics to ignore its claims.”

The Wall Street Journal story about the sick Wuhan researchers came after most of the radical shift in media perspective had occurred. So what had happened earlier to change everyone’s thinking?

According to the media’s favorite statistician, Nate Silver, not a whole lot. “[T]he evidence seems murky and inscrutable either way and I’m not sure it has *changed* that much,” he tweeted.

So it doesn’t take much scrutiny to realize that these media figures are admitting their biases in plain view. It didn’t matter what was being said last year as much as who was saying it.

If Trump or another Republican promoted the lab leak theory, it had to be wrong. But now that their villain is no longer in the White House, the media are free to consider all possibilities.

And—what do you know? —today all their stories are pretty much identical to each other again, even if their new pack narrative directly contradicts their groupthink of a year ago.