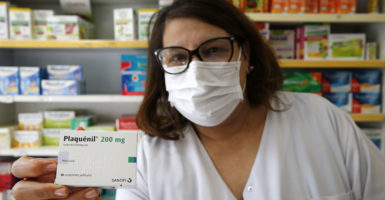 Studies of hydroxychloroquine so far are incomplete, and researchers caution that its effectiveness in fighting the coronavirus is not certain. Pictured: A pharmacy employee in France displays a box of Plaquenil, a brand name for hydroxychloroquine, on March 27. (Photo: Chesnot/Getty Images)

The federal government has stockpiled 29 million pills of the anti-malaria drug hydroxychloroquine as the best known way to treat active cases of COVID-19, and thousands of patients in New York will take it.

But using the Food and Drug Administration-approved drug to treat COVID-19 has sparked an intense political controversy.

President Donald Trump, who has publicly touted hydroxychloroquine since March 19, said of the drug Sunday: “If it does work, it would be a shame if we didn’t do it early. I’ve seen things I sort of like; so what do I know, I’m not a doctor.”

Axios first reported on an internal dispute between White House trade adviser Peter Navarro, who is bullish on the drug, and Dr. Anthony Fauci, director of the National Institute of Allergies and Infectious Diseases, who is concerned that only “anecdotal evidence” suggests the drug is effective against COVID-19.

Ohio state Rep. Tavia Galonski, a Democrat who represents parts of Akron, said she would make a complaint to The Hague that Trump is guilty of crimes against humanity for promoting a drug before all the facts are known.

“I can’t take it anymore. I’ve been to The Hague. I’m making a referral for crimes against humanity tomorrow,” Galonski tweeted Sunday. “Today’s press conference was the last straw. I know the need for a prosecution referral when I see one.”

The Ohio Democrat’s tweet was in response to one from Go-Blue-44, who has fewer than 600 followers, saying: “And an invitation to The Hague for crimes against humanity for pushing a drug that hasn’t been tested for coronavirus patients.”

The Food and Drug Administration has expedited use of hydroxychloroquine for COVID-19 patients; most other countries also allow the drug to be used to treat the new disease.

Aside from political musings, here are some facts to know about hydroxychloroquine.

Studies so far have shown varying degrees of promise in using hydroxychloroquine against the coronavirus, said Dr. Kevin Pham, a medical doctor and contributor to The Daily Signal.

Pham told The Daily Signal that existing studies are “small or poorly controlled.”

“The results are promising, but leave lots of questions,” he said.

One French study found that COVID-19 patients treated with a combination of hydroxychloroquine and azithromycin recovered more quickly than others.

However, that study involved only 36 patients, and just 20 took the medicine, considered a small sample.

The French study also didn’t look at patients in intensive care units. Most patients who took the drug improved. However, one patient from the group tested positive after taking the medicine.

A more recent study out of China used a larger but still fairly limited sample of 62 people. Half took the anti-malaria drug, the other half did not.

The 62 patients were treated for five days, their fevers and cough monitored. The study found 25 of the 31 patients who were given the drug improved, versus 17 patients in the control group of 31.

The study’s authors determined that additional research should be done.

Another study out of France, with a larger sample of 80 coronavirus patients, found improvements in all but one patient who used the drug.

New York, the hardest hit state in the country, will provide hydroxychloroquine to 4,000 COVID-19 patients. The University of Albany School of Public Health is observing the patients who take the drug.

“Thousands are taking it in New York, and we should know if hydroxychloroquine is effective within about two weeks,” Dr. Lee Gross, a family doctor in Florida, told The Daily Signal. “It doesn’t mean we throw caution to the wind. But we should have a relatively good idea based on New York.”

Gross noted that so far the “data is very limited.”

“In a perfect world, we would do more controlled studies, but you go to war with the army you have, not the army you want,” Gross said. “We are facing a pandemic now. To have all the information we want could take six to eight weeks.”

Hydroxychloroquine has been around to fight malaria since the 1950s. It is also used to treat rheumatoid arthritis and lupus. So it’s not new on the market.

Individuals usually take a total of 10 pills as part of a four- to 10-day regimen. Typically, the dose is two pills for five days.

This would be followed by taking azithromycin for three days, Gross said.

Gross said he anticipates that one day the drug, if effective against the coronavirus, could become like Tamiflu, an antiviral medicine taken at the earliest signs of the flu for prevention.

“There have been recent articles that this is not effective for the critically ill,” Gross said of hydroxychloroquine. “That might be the case. That doesn’t mean we shouldn’t explore this when it’s in the early stages.”

“In India, health care workers take hydroxychloroquine as a preventative measure. I’m assuming, if the data pans out, this may be like Tamiflu, which you have to take 24 to 48 hours after the first symptoms, or it’s useless.”

4. What Are the Side Effects?

“What do we have to lose?” Trump has asked.

For one thing, hydroxychloroquine does have some quite serious side effects.

But the medication can be obtained only through prescription, so patients can’t legally access it without medical supervision.

Given that use of hydroxychloroquine is under medical control, the side effects aren’t a major concern. Disappointing the public is a potentially larger problem, Pham said.

5. What Do Respiratory Specialists Say?

Respiratory specialists recommend the use of hydroxychloroquine for COVID-19, but with caveats.

One guideline was to prescribe hydroxychloroquine to hospitalized patients who have COVID-19.

This only applies, the report says, when “shared decision-making is possible,” “data can be collected for interim comparisons of patients who received hydroxychloroquine … versus those who did not,” “the illness is sufficiently severe to warrant investigational therapy,” and “the drug is not in short supply.”

“We suggest that, if the drug is prescribed, that it be done in the context of data collection for research,” Wilson said. “We believe that in urgent situations like a pandemic, we can learn while treating by collecting real-world data. … Thus, the bottom line is, whether hydroxychloroquine …  confer benefits to patients with COVID-19 are unanswered questions.”