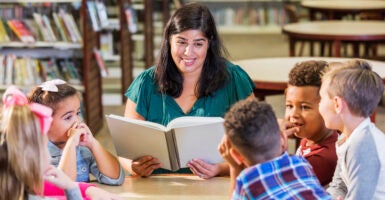 Three states already have outlawed teaching children to judge each other based on skin color. At least 11 other states are considering doing so as the U.S. Department of Education promotes critical race theory in schools. (Photo illustration: kali9/Getty Images)

“I know full well the insidiousness of the so-called critical race theory that aims to resegregate society, discriminate against those who are white, victimize those who are black, and render America a nation of identity groups rather than Americans,” the teacher wrote.

Hardly a day goes by, Taylor said, that he doesn’t hear from a constituent on the issue.

Critical race theory contends that individuals either are oppressed or are oppressors, based on their skin color.

The Republican lawmaker has proposed legislation to increase transparency so that parents can find out more about the curriculum in K-12 classrooms. He has 25 co-sponsors for the South Carolina Academic Integrity Act, but he introduced it in the final week of the legislative session, so it will be January before it gets any formal debate.

So far this year, Arkansas, Idaho, and Oklahoma already have enacted laws to prevent teaching or promoting critical race theory in schools.

At least 11 other states, including South Carolina, have legislation pending. The trend comes as the U.S. Department of Education under the Biden administration is promoting the teaching of critical race theory in schools.

Describing his legislation in South Carolina to The Daily Signal, Taylor said: “What it really principally does is, it requires full transparency on the part of all the schools to list all the curricula, the instructional material, to ensure that parents are aware of the details of what is being taught to their children.”

If enacted, his bill will require the state to withhold funds from any school that fails to post curriculum.

“Transparency is paramount, because parents at this moment—unless they are looking at homework or a quiz that comes home or a homework assignment—they may not be aware of what’s being asked of their children,” Taylor said, adding:

There has to be a carrot and stick. … The people that you need to empower the most are parents. If parents are doing their job and are involved in their child’s studies, they need to understand what is being taught to their kids.

The South Carolina bill prohibits schools from using specific resources in teaching, such as The New York Times’ contested 1619 Project, which asserts that America’s true founding was not 1776 but 1619, when the first slaves were brought to Virginia from Africa.

Opponents of such legislation include Megan Tuttle, president of the New Hampshire chapter of the National Education Association, the nation’s largest teachers union.

Tuttle calls the legislation in her state “quite simply repugnant.”

“The pandemic is laying bare systemic inequalities in education and in our most vulnerable communities,” Tuttle said Thursday in an NEA press release. “Stifling and penalizing conversation and education on those inequalities and their sources is ignorant and does nothing to move us forward.”

Although Utah won’t be able to pass related legislation until 2022, the Utah State Board of Education is evaluating the definition of “equity” in education, board member Jennie Earl said.

“Equity,” a popular term on the left and part of critical race theory, crops up increasingly in political debate and policy in place of  “equality.”

“We are seeing a push here to get [critical race theory] in the curriculum,” Earl told The Daily Signal, noting that the philosophy seems to be seeping into reading assignments and history curriculum.

The Utah State Board of Education met this week to discuss the issue.

The state’s current definition of equity in education reads: “Equity is the equitable distribution of resources based upon each individual student’s needs. Equitable resources include funding, programs, policies, initiatives, and supports that target each student’s unique background and school context to guarantee that all students have access to a high-quality education.”

The change in the state school board’s language would move away from distributing education resources based on “need,” instead distributing resources to achieve equal opportunity.

The proposed new definition reads: “‘Educational equity’ means acknowledging that all students are capable of learning, and distributing resources to provide equal opportunities based upon the needs of each individual student.”

It then substitutes the word “recognize” for “target” in the second sentence of the original definition.

As for new laws that could be passed by the Utah Legislature, lawmakers aren’t looking so much at banning critical race theory as abiding by the Civil Rights Act of 1964, Earl said.

“We would ban any teaching that one race is superior or inferior to another race,” Earl said. “We would just be upholding the laws that are already on the books.”

Rather than ban something, state laws should focus on preventing compelled speech—such as forcing teachers to promote a viewpoint or to grade a student based on his or her personal views, said Jonathan Butcher, the Will Skillman fellow in education at The Heritage Foundation.

This should be the case for both state and federal governments, Butcher said.

Many conservatives didn’t like Common Core education standards adopted at the state level because those national standards were endorsed by Washington, Butcher said. It would be inconsistent to favor proposals in Congress to restrict local schools from teaching the 1619 Project, for example, he said.

“Conservatives should not be in the business of banning books,” Butcher told The Daily Signal, adding: “Talk about the 1619 Project and talk about why it’s historically inaccurate. Focus on blocking compelled speech.”

A ban on teaching the 1619 Project is in the current South Carolina bill, but might not remain in the final version after hearings and other input, Taylor said.

“From what I can tell, every reputable historian both left and right has rejected it,” the state lawmaker said of The New York Times’ take on American history.

Taylor, who served on the state House’s Education Committee for 10 years, said students should get a well-rounded education.

“I’m for students in K-12 and the university level to learn everything, the good and bad. We certainly have in our history good and bad,” Taylor said, adding:

From my view and understanding of the critical race theory curriculum, it is more devious and not as well intended. If we pit people against each other in various groups and have this identity politics being born in schools, that does not serve America well.