The Woke Mob Comes for Lincoln 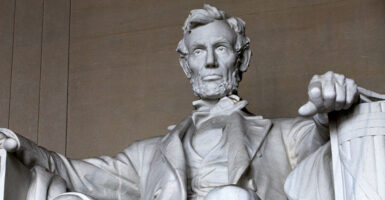 Legislation is moving through the House to put President Abraham Lincoln’s words, currently the motto of the Department of Veterans Affairs, on the chopping block. Pictured: The Lincoln statue sits inside the rotunda of the Lincoln Memorial April 10, 2015, in Washington, D.C. (Photo: Raymond Boyd/Getty Images)

The Department of Veterans Affairs was born of war.

In the most biblically righteous inaugural address ever delivered by an American president, an exhausted Abraham Lincoln called upon his countrymen to care for those who had taken up arms in defense of the nation—risking their all in battles that raged from Pennsylvania farm fields and the desert brush of the New Mexico Territory to the Caribbean and the English Channel.

In this, his second inaugural address, delivered just weeks before his death, Lincoln closed his remarks with these words:

With malice toward none; with charity for all; with firmness in the right, as God gives us to see the right, let us strive on to finish the work we are in; to bind up the nation’s wounds; to care for him who shall have borne the battle, and for his widow, and his orphan—to do all which may achieve and cherish a just, and a lasting peace, among ourselves, and with all nations.

Lincoln’s charge is emblazoned on VA’s headquarters building and its hospital walls. And thanks to a 2020 initiative, plaques with these words are slated to be placed in VA cemeteries across the country to remind Americans of the speech Frederick Douglass called “the sacred effort.”

The message is simple. America is a creedal nation founded on the universal ideals of human freedom and individual dignity. That creed has been defended by 41 million Americans who have worn the uniform since the first shots were fired on Lexington Green in April 1775.

Sadly, there are some who are bound and determined to “escape history.” Legislation is moving through the House and is on offer in the Senate to put Lincoln’s words on the chopping block. And there is little doubt that if it lands on President Joe Biden’s desk, he will sign it.

The woke tide engulfing America is now taking aim at America’s warriors. Those who today loudly argue that Lincoln’s words are non-inclusive and sexist are the same who said nothing as the Obama-Biden administration left VA in tatters.

Of course, veterans are not immune from the cultural cannibalism tearing the country apart. In New York City, Mayor Bill de Blasio gladly authorized a parade celebrating cannabis but denied a permit to soldiers who wish to observe Memorial Day. This is the same mayor who targeted for removal the statue of Theodore Roosevelt in front of the Museum of Natural History.

There is a deeper meaning to what is happening at VA. To strike at a nation’s symbols is to question the nation’s reason for being. Professor Jeff Polet of Hope College puts it simply: “Whoever describes the past shapes the present.” What we are witnessing is a revolution that seeks to reshape the core of the American ethos. And not even the Great Emancipator is immune.

The American nation did not spring de novo from the minds of powdered philosophers gathered in a suffocatingly hot room in Philadelphia. As Russell Kirk demonstrates in “The Roots of American Order,” it was the culmination of moral and political thought that ran from ancient Jerusalem through Athens and Rome to London.

America was the expression of 3,000 years of historical and religious memory. The emphasis is on memory, what G.K. Chesterton described as the “democracy of the dead” that “refuses to submit to the small and arrogant oligarchy of those who merely happen to be walking about.”

One million American warriors have perished defending that national memory. If there is no room for Lincoln, if we permit politicians to erase him in the name of whatever liberal clerisy happens to be in the ascendancy, where is there room for those—our veterans—who defended the “mystic chords of memory” he summoned forth during America’s greatest trial?