Will France Stand Up to Critical Race Theory and Postcolonial Movements? 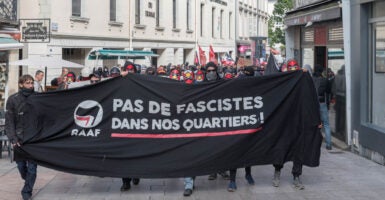 “You start out giving your hat, then you give your coat, then your shirt, then your skin and finally your soul.” So said famed French President and World War II hero Charles de Gaulle on the costs of dealing with the Soviet Union.

In de Gaulle’s time, many were content to let the Soviets be and to coexist with what President Ronald Reagan coined “the evil empire.” De Gaulle rightfully distrusted the USSR and fought tooth and nail to keep Soviet influence out of the French Republic.

Though the USSR collapsed in 1991, the anti-Western influence de Gaulle worked so hard to oppose has gained a foothold in France. Anti-racism and postcolonial movements, aimed at denigrating France as an oppressive and evil actor on the world stage, have seized control of the country’s social and academic institutions.

“Anti-racist” and postcolonial activists, like their comrades in America, frequently take to the streets and violently attempt to tear down statues and other symbols of “oppression.”

This has not escaped the notice of those in France who still view their home positively. French Education Minister Jean-Michel Blanquer cautioned back in February that “Islamo-leftism” and woke culture was infesting academia and “wreaking havoc.” President Emmanuel Macron has repeatedly rejected calls to cancel French history.

But on April 21, things took a decidedly darker turn. Twenty retired generals, along with 80 officers and 1,000 rank-and-file soldiers, published a letter in French journal Valeurs Actuelles warning Macron and his government that unless the threat of anti-racism and radical Islam was contained, the military would need to step in to prevent civil war.

“The hour is late, France is in peril, threatened by several mortal dangers,” reads the letter. “Though retired, we remain soldiers of France, and cannot, under the present circumstances, remain indifferent to the fate of our beautiful country.”

Penned by former officer Jean-Pierre Fabre-Bernadac and signed by notable officials, including former Commander of the French Foreign Legion Christian Piquemal, the letter caused a firestorm across the country, which was then exacerbated by a second letter published May 10.

The initial letter’s publication date was no coincidence. On that day 60 years prior was the Algiers putsch, a failed coup d’état by four French generals to keep Algeria under control of the French Republic after de Gaulle began negotiations to grant the colony independence. The letter, through its timing and content, was a thinly veiled threat against the civilian government: Restore order, or we will.

It must be made clear. The idea of a military-led overthrow of a civilian government is completely antithetical to the values of Western republics. We would expect these types of internal threats from a failed state, not a robust civilization like France. These threats must be taken seriously and denounced, as Macron has rightly done.

However, that is not to say the letter does not tap into a very real danger facing the French Republic.

“[Leftists] despise our country, her traditions, her culture, and want to watch her dissolve by tearing her away from her past and her history,” writes Fabre-Bernadac. He’s right, of course. And the French agree.

In a Harris Interactive poll conducted for French network LCI, 58% of respondents said they agreed with the sentiments expressed in the letter.  Additionally, 84% of respondents agreed that violence in the country was increasing day by day and 73% believed France was in decline.

America and France find themselves at a turning point. The rising tide of woke leftists who despise Western civilization must be countered, but we cannot allow our desire to protect our values destroy them in the process.

It is de Gaulle again who delivers a message of hope. In June 1940, the young general delivered a message from Britain to beleaguered French troops holding out against Nazi forces on the continent. The words resonate now as they did then.

“Has the last word been spoken? Must hope disappear? Is the defeat final? No. Believe me—nothing is lost for France … Whatever happens, the flame of French resistance must not go out and shall not go out.”

The flame of the Western civilization is flickering. It is on those of us who cherish traditional Western values and culture to tend the flame.