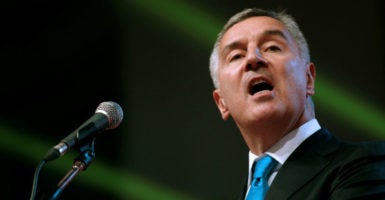 A recently foiled coup plot in the small but geographically important Balkan nation of Montenegro underscores the lengths to which Russia will go to undermine democracy and exert its influence in the region.

Unfortunately, it’s doubtful many Americans have heard about it.

Montenegro held parliamentary elections on Oct. 16. The party of then-Prime Minister Milo Dukanovic—the Democratic Party of Socialists—won the most seats.

Over the past seven years, Montenegro—a U.S. ally—has reformed itself in preparation for NATO membership. In May 2016, Montenegro and NATO foreign ministers signed an accession protocol. The protocol is awaiting approval by Montenegro’s parliament, as well as ratification by NATO’s member states—including the U.S.—before Montenegro becomes NATO’s 29th member.

Russia is not happy with Montenegro’s decision to join NATO. It is accused of being behind a failed plot to break into parliament on election day, assassinate the former prime minister, and install a pro-Russian government in Podgorica, the nation’s capital.

Twenty people have been arrested for the alleged plot, including a former commander of Serbian special police forces. Some of the alleged plotters arrested have fought in eastern Ukraine for Russian-backed forces.

Russia has denied involvement in the plot, but Montenegro’s chief prosecutor has named two Russian citizens as the alleged organizers, saying the plot was the work of “nationalists from Russia.” One of the suspects arrested has reportedly become a key informant detailing Russia’s role in the plot to take down the government in Montenegro.

Even Serbia’s prime minister, who initially denied that a coup plot existed, has found “incontrovertible evidence” that Montenegro’s former prime minister was under surveillance by people “who were acting in coordination with foreigners.”

The murky coup plot appears to be the latest example of Russia’s use of irregular warfare to achieve its desired outcomes. In the case of Montenegro, this means putting a stop to the nation’s accession to NATO and getting rid of a ruling party that has steered the nation on a pro-Western track.

Russian President Vladimir Putin has sought to expand Russian influence in the Balkans, including in Montenegro. Russia has significant economic influence in Montenegro, and in 2015, even requested access to Montenegrin ports for the Russian navy to refuel and perform maintenance. The Dukanovic government turned down the Russian request.

In November, Montenegro’s new prime minister, Dusko Markovic, reiterated that Montenegro is committed to joining NATO, telling a session of parliament, “The Cabinet that you will vote for today will take us to NATO.”

Montenegrin troops took part in NATO’s International Security Assistance Force mission in Afghanistan from 2010-2014, and its men and women in uniform continue to contribute to the follow-on Operation Resolute Support.

NATO’s invitation to Montenegro shows other countries in the region that if they fulfill the requirements of NATO and demonstrate an ability to contribute to the alliance’s security, NATO membership is possible. At the same time, it also shows that Russia does not have a “veto” over NATO enlargement.

Russia’s apparent role in a failed plot to assassinate the former prime minister of Montenegro underscores the geopolitical importance Russia places on the Balkan region, and the lengths the regime will go to exert influence there.

The U.S. should take notice and continue to support its Balkan ally. U.S. leaders should recognize that as the Balkans recover from the wars of the 1990s, there are forces at work that intend to drag them back to civil war and repression.