He Was Murdered Over a Lie: What the Killing of Samuel Paty Means for Free Expression 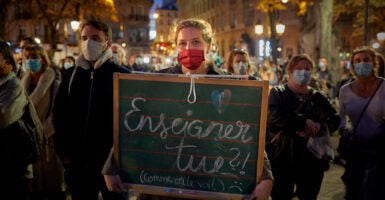 An Islamic extremist murdered schoolteacher Samuel Paty for allegedly showing a depiction of the Prophet Muhammad from the French satirical magazine Charlie Hebdo in a lesson on free expression in France. This turned out to be a lie told by a Muslim schoolgirl who wasn’t in class that day. Pictured: People gather to watch a tribute to murdered Paty on Oct. 21, 2020, in Paris. A woman holds a chalkboard reading, “Teaching Kills?!” (Photo: Kiran Ridley/Getty Images)

Samuel Paty was decapitated on Oct. 16, 2020, outside the middle school in a north Paris suburb where he had taught history and civics for five years.

The murderer, a radical Islamist terrorist, acted because Paty had supposedly shown his class images of the Prophet Muhammad from the French satirical magazine Charlie Hebdo in a lesson on free expression in France.

The magazine was the target of a high-profile Islamist terrorist attack back in January 2015 that spurred a monthlong wave of jihadi violence across the country.

In a horrifying update to the Paty story, the Muslim schoolgirl whose story incited the killer revealed she was lying.

The girl, who has not been named, claimed Paty told Muslim students to leave the class before showing the pictures of Muhammad. She was then supposedly suspended for challenging Paty on showing the “blasphemous” images.

In reality, the girl was not in class the day she alleged Paty showed the images, as she had been suspended the day before for repeated truancy. She continued to lie until the truth was forced into the open when some of her classmates revealed she wasn’t at school the day of the supposed incident.

The series of vicious attacks, from the Charlie Hebdo attack to the recent decapitation of Paty, has forever cemented the image of an Islamist terrorist as the enemy of free expression.

There is a tacit understanding in France that satirizing Islam or the prophet can lead to deadly consequences, and many on the French and American left claim the only way to avoid such incidents is to self-censor.

They claim it’s racist or Islamaphobic to acknowledge reality: A segment of France’s population is willing to kill in the name of censorship.

This is not to say that Islam and Western values are incompatible. Religious freedom and tolerance are the bedrock of Western philosophical thought.

However, tolerance is a two-way street. Islamist terrorists spit on the values of free expression and are enabled by leftists on both sides of the Atlantic who would sooner see free speech canceled than risk possible offense.

But even in the face of such barbarism, the French refuse to back down.

French Higher Education and Research Minister Frédérique Vidal recently said she would direct federal agencies to research the impact of leftist philosophies like “post-colonialism” and “Islamo-leftism” to “distinguish academic research from activism and opinion.”

And President Emmanuel Macron, in perhaps the most forceful rejection of woke politics yet, rejected calls to tear down French history. “The republic will not erase any trace, or any name, from its history, it will not take down any statue,” he said.

His statement directly contrasted the response by those in power to leftist efforts at destroying American heritage.

For months, Americans have witnessed the radical left attempt to disparage Washington and the Founding Fathers as racist bigots or paint anyone who didn’t unflinchingly support Black Lives Matter as abnormal.

This type of rhetoric will tear America apart.

France has rightfully recognized how damaging the rhetoric of censorship and cancel culture are to the stability of a nation and has begun to take steps to counter the leftist onslaught seeping its way across the ocean.

It is time for America to do the same and push back hard on those on the radical left who would try to lay the American experiment low.

The Marquis de Lafayette, a Frenchman who was instrumental in achieving independence for the young United States during the Revolutionary War, once said of America, “Humanity has won its battle. Liberty now has a country.”

Let’s not let him down.