France Is at War, Officials Say After Terrorist Attack in Nice Kills at Least 84 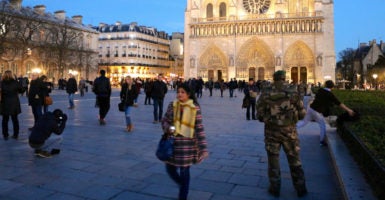 KYIV, Ukraine—At 3:45 a.m. Friday, just hours after a man drove a large truck through a crowd in the French seaside town of Nice, killing at least 84, French President François Hollande made a televised address to the nation.

He began by making it clear the attack at the close of Bastille Day, France’s Independence Day, was an act of Islamist terrorism.

“All of France is under threat from Islamist terrorism,” Hollande said from the Elysée Palace in Paris. “This attack, of which the terrorist nature cannot be denied, is once again of an absolute violence, and it is clear that we must do everything to fight the scourge of terrorism.”

In a separate address Friday afternoon from Nice, Hollande said about 50 other victims were “critically injured between life and death.”

Two Americans, a man and his 11-year-old son from Texas, were among the dead, according to news reports. At least 10 children were killed.

Police shot and killed the driver of the truck more than a mile after he began the carnage.

France’s justice minister,  Jean-Jacques Urvoas, and other authorities identified the driver as 31-year-old Mohamed Bouhlel, a French-Tunisian who was a resident of Nice. Urvoas described Bouhlel as having been a petty criminal up until the attack, Associated Press reported.

This was the third major terrorist attack in France in 18 months, and a devastating blow to a country looking to move on from November’s attacks in Paris, in which Islamic State terrorists killed 130 in a coordinated series of bombings and shootings.

Other French officials were quick to join Hollande in declaring France was at war with Islamist terrorism.

Nicolas Sarkozy, a former French president and candidate for president in 2017 said, “We are in a war that will last, with a threat that will constantly renew itself, until it’s completed.”

He added: “Adaptation and the permanent strengthening of our will to fight against Islamist terrorism remains an absolute priority. Nothing can be as it was.” Paris fell under the watchful eyes of security forces months before the attack in the seaside city of Nice. (Photo: Nolan Peterson/The Daily Signal)

As France celebrated Bastille Day earlier Thursday, Hollande had announced that Operation Sentinelle—an emergency security crackdown put in place across France after the November Paris attacks—would officially end July 26. The attack in Nice late Thursday night quickly laid that plan to rest, however, only hours after it was announced.

Hollande said in his predawn speech Friday that he would extend France’s national state of emergency by three months. France also would escalate its military campaign against the Islamic State, or ISIS, in Syria and Iraq, the visibly mournful French president added.

“We will continue striking those who attack us on our own soil,” Hollande said.

Since November, the throngs of tourists at classic Parisian tourist landmarks such as the Notre Dame Cathedral, the Champs-Elysée boulevard, and the Louvre art museum have weaved around French commandos walking in combat formations with weapons drawn.

The soldiers stoically scan tourists’ faces, looking for tells that might give away a potential terrorist.

There was a quiet, somber pall in Paris in the weeks following the November attacks.

Yet, despite the overt presence of French troops on patrol across the French capital since November, the city’s summer pace of life appears to be unaffected. Crowds fill cafés, children float model sailboats in the Jardin de Luxembourg, fanny-packed tourists line up at the entrance to the Louvre and other attractions.

Amid the terrorist threat and state of emergency, the Euro 2016 soccer championships went off without major incident and the Tour de France is underway. Friday’s stage of the annual bike race went ahead with heightened security.

In many ways, the greatest strain of the 8-month-old security crackdown has been on the military.

Reservists have been called up to meet manpower needs, and many soldiers deployed to patrol the streets of major cities are living away from their families in bare-bones, temporary housing.

Operation Sentinelle also comprises aggressive law enforcement and intelligence gathering protocols, including house raids and searches without a warrant or judicial oversight. The state of emergency grants officials extra powers to place people under house arrest and shut down mosques with suspected ties to radical Islamists.

Some French commentators have claimed that France is in the midst of an “internal war,” in which the country’s disaffected Muslim minority, many of whom were born in France, is increasingly susceptible to recruitment by radical Islamist groups such as ISIS or al Qaeda.

Those who see terrorism as the byproduct of a cultural schism lean toward law enforcement action and intelligence gathering as the best recourse, as well as the need for a hard reckoning within French society to better integrate its ostracized Muslim minority.

Mohammed Moussaoui, president of France’s Union of Mosques, said In an interview with French media that the fight against terrorism should prioritize the “education and the prevention” of Muslim youth.

“There is a radicalization ongoing on prisons due to a lack of space,” Maréchal-Le Pen said Friday, according to the French newspaper Le Monde. “There needs to be buildings specifically for Islamist terrorists so they are not mixed with others.”

Others, however, say France is at war against an external enemy, and military action abroad is the best way to diminish the terrorist threat to the homeland.

Some experts also partially attribute a recent worldwide uptick in Islamic State terrorist attacks, from Baghdad to Bangladesh, to the terrorist army’s losses on the battlefields of Iraq and Syria.

Veryan Khan, editorial director of the Terrorism Research and Analysis Consortium, said terrorist attacks like the one in Nice are a way for ISIS to divert attention from losses in Iraq and Syria.

“The more we see the caliphate shrink, the more often we will see foreign attacks,” Khan told The Daily Signal.

This report has been updated to include the name of the suspected terrorist, and to add other details.