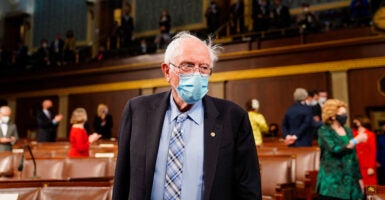 The Senate Committee on the Budget held a hearing on “Waste, Fraud, Cost Overruns, and Auditing at the Pentagon” on May 12. By the title you might think the conclusion of the hearing was preordained: The Department of Defense is the greatest example of fraud and mismanagement in the federal government.

You would have been correct. That was exactly the message that the committee chair, Sen. Bernie Sanders, I-Vt., wanted to convey.

At the outset, Sanders described a Pentagon beset with “enormous amounts of waste and financial mismanagement,” and questioned why Congress should support the Defense Department’s budget of over $700 billion considering all these issues. The witnesses that the Democratic majority selected parroted back these messages on cue from the chair.

All this talk of waste and fraud at the Pentagon would be deeply concerning if it were true. It would mean that the military is squandering money that should be going to our national defense or even applied to reducing our obscene national debt.

In truth, the charge is demonstrably false.

Among the many misleading statements made by the senator was the claim that “a major reason why there is so much waste, fraud, and abuse at the Pentagon is the fact that the Defense Department remains the only federal agency that has not been able to pass an independent audit.”

As The Heritage Foundation’s director of the Center for National Defense, Thomas Spoehr, pointed out: “Enron, the poster child for corporate abuse, managed to pass all its financial audits, right up until the moment it imploded as a result of massive fraud.”

Sure, the Department of Defense has substantial challenges integrating its multiple levels of financial management systems. Many of these systems were established before the requirement to be financially auditable was put into place.

The average Air Force aircraft is as old as the requirement for financial statement audits—30 years. Adapting program management to a new financial standard will necessarily take time, resources, and new systems. The question that Congress and the taxpayers should be asking is if this time and effort is warranted.

Sanders also dusted off an erroneous cliché that appears impossible to kill, asking, “Why should we give the military more money when the United States already spends more money on its military than the next 12 countries combined?”

This is a grossly flawed comparison that fails to account for the actual purchasing power of any of these countries, the lack of honest reporting by countries like China and Russia, or even the vast differences in interests and obligations.

It does not take any economics education to know that American soldiers are paid vastly more than the conscript-style Chinese soldiers, nor a B.A. in global affairs to understand that by treaty the U.S. has kept the world safe from global conflict since World War II.

Even if one uses just purchasing power parity to compare the different defense budgets, Russia and China put together already reach the level of the Pentagon’s budget. Further, one nation’s defense budget needs to match its national security strategy—not an arbitrary comparison to other countries.

None of this means that the Defense Department should be exempt from improving management and financial systems. Quite the opposite—the American taxpayer deserves a Pentagon that is getting the most out of every dollar. It is why the department should pursue a new round of base closures, allow private-public competitions, allow rollover operations funds to reduce use it or lose it, simplify the reprogramming process, and concentrate on actual military missions.

And yes, it should continue pursuing efforts to publicly account for the resources it has been given, not only as a good steward of public monies but to validate the public’s confidence. But good accounting practices do not equate to a slimmer, less capital-intensive military. It has a job to do and the military services are constantly reevaluating what it takes to protect the country in a relentlessly evolving world.

The Defense Department employs close to 2 million people and controls over $3 trillion in assets. It is not going to be a lightweight fighter. It is necessarily big, has lots of moving parts, and the complexity that goes with it.

However, as Spoehr stated during the hearing, “Just because something is big does not mean it is bloated. Dwayne ‘The Rock’ Johnson is big, yet no one would accuse him of being bloated.”

The Pentagon is a heavyweight fighter with low bodyfat, aware of the importance of maintaining balance in weight, strength, and agility. Congress should not expect it to perform world-class feats on a starvation diet even if it was able to account for every calorie.

This article has been corrected to reflect the number of people employed by the Defense Department.