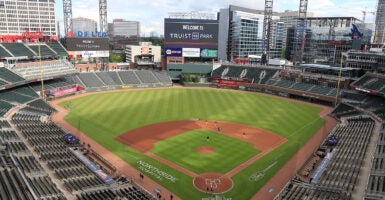 Truist Park in Atlanta will sit empty on July 13, the day of baseball's 2021 All-Star Game. The Midsummer Classic was originally set to be played at the Atlanta Braves' stadium until Major League Baseball announced it was moving the game out of Georgia in response to the state's new election law. (Photo: David John Griffin/Icon Sportswire/ Getty Images)

A Christian crowdfunding platform is stepping up to the plate to help small businesses in the Atlanta area that were hurt by the move of Major League Baseball’s 2021 All-Star Game out of Georgia.

GiveSendGo is hosting a campaign to raise $100,000 for Georgia businesses after MLB Commissioner Rob Manfred last month moved the All-Star Game from Atlanta to Denver.

“There is strength in numbers and … we can really impact some businesses in Atlanta, and show them that there is a voice and a group outside of even their hometown that’s willing to help support them in the midst of difficult situations,” Jacob Wells, co-founder of GiveSendGo, told The Daily Signal in a phone interview Wednesday.

Wells and his sister, Heather Wilson, launched GiveSendGo in 2015 because they saw a need for a Christian crowdfunding website that would offer hope to individuals raising money for missionary work or other pressing needs.

The model of GiveSendGo is inspired by the Bible passage in Acts 2 that describes how the early church “shared with anyone who was in need.”

Wells, 42, estimates that about 1,500 fundraising campaigns launch on the website every month. One of its latest campaigns is for Georgia businesses adversely affected by the move of the All-Star Game, set for July 13.

Manfred on April 2 announced that baseball’s Midsummer Classic would be relocated from the Peach State after Georgia Gov. Brian Kemp, a Republican, signed a new election reform bill into law. Criticism of the bill by President Joe Biden and other Democrats as supposedly “racist” preceded Manfred’s denunciation of the legislation and announcement that moving the All-Star Game from Atlanta was “the best way to demonstrate our values as a sport.”

The “lost economic impact” for Georgia as a result of the game’s relocation has been estimated to be more than $100 million, Holly Quinlan, president and CEO of Cobb Travel and Tourism, told CNN. Cobb County is located in the Atlanta metropolitan area.

The Atlanta Braves baseball team lamented the decision to move the game, writing in a statement that “[t]his was neither our decision, nor our recommendation,” adding that “businesses, employees, and fans in Georgia are the victims of this decision.”

Seeing the adverse effect the game’s move will have on Atlanta-area businesses, a concerned citizen, Betsy Fish, contacted Wells at GiveSendGo to see whether together it could do something to help Georgians directly affected by MLB’s decision.

“It’s time to stop just talking and do something to make a difference,” Fish wrote on the campaign donation page. “Let’s help Atlanta citizens know we have their back!”

The goal of the campaign is both to “[s]hare hope with businesses affected by the MLB move … [and] raise $100,000 to support those Atlanta citizens economically impacted by Major League Baseball taking this political stand,” she said.

GiveSendGo contributed $1,000 to kick-start the campaign, which will likely run through mid-July, Wells said.

The platform aims to not only provide financial assistance, but also offer hope to its users. Every GiveSendGo campaign page features a red “Give Now” button and a blue “Pray Now” button. The latter allows anyone to send a prayer or message of encouragement to the campaign initiator.

The platform also has a prayer team composed of staff members and volunteers who call every campaign initiator to offer prayer and support on his or her fundraising journey.

Wells said the site does not seek to be political, but he and his sister viewed the Georgia small-businesses campaign as “an opportunity for us to say to our larger audience … here is an opportunity …  to donate a couple dollars, and if a lot of people do that, then we can help bring some relief to this situation.”

GiveSendGo gives donors the opportunity to underwrite its expenses, but does not take a percentage of the donations, so all the funds raised will be distributed to Atlanta-area businesses through a grant program.

Businesses will be asked to fill out an application to show their need for financial assistance. The number and size of the grants will depend upon the amount of money raised.

“Together we can make a difference,” Wilson, 45, said. “As much as social media, and the media that we watch on TV and the computer, feels like it’s trying to divide us, we don’t have to let it.”

Wilson added that the fundraiser is simply an opportunity to help those in need.

Those people that are down in Georgia, those business owners, they are not all Republicans or all Democrats or all independents. They are all just people trying to do their best in their corner of the world.

Click here to be a part of the GiveSendGo campaign to support small businesses in the Atlanta area.