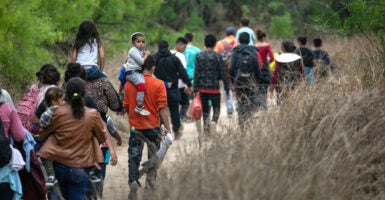 Asylum-seekers, most from Honduras, walk toward a U.S. Border Patrol checkpoint after crossing the Rio Grande from Mexico March 23, 2021, near Mission, Texas. (Photo: John Moore/Getty Images)

Immigration and Customs Enforcement officials performed a record low number of deportations in April despite illegal border crossings occurring at a 20-year high, according to the agency.

Immigration and Customs Enforcement officials deported 2,962 immigrants in April, a 20% decline from March, an agency spokesperson told The Daily Caller News Foundation Wednesday. The April numbers mark the first time the agency has deported less than 3,000 individuals in one month since the beginning of ICE’s records, The Washington Post first reported.

“U.S. Immigration and Customs Enforcement (ICE) has concentrated its limited law enforcement resources on threats to national security, border security, and public safety. This has allowed ICE to focus on the quality of enforcement actions and how they further the security and safety of our communities rather than the simple quantity of arrests and removals,” an ICE spokesperson told The Daily Caller News Foundation.

Biden’s 100-day pause on most deportations combined with new enforcement priorities caused interior arrests by agency officials to decline, according to the Post.

“This administration has de-emphasized the likelihood that people would get arrested if they aren’t a threat to public safety or recently crossed the border, so they are not going to have strong removal numbers,” former acting ICE Director Ronald Vitiello said, according to the Post.

“That’s part of a signal being sent—that immigration enforcement isn’t a priority for this team,” Vitiello said, the Post reported. “The odds of being arrested just for being in the country illegally were always extremely low, and now they’ve basically ruled it out by policy.”

ICE officials deported around 37,000 immigrants in the last seven months and the agency is expected to report less than 55,000 total deportations in 2021, the first time ICE will have deported fewer than 100,000 people in recorded history, according to the Post.

CBP officials encountered over 172,000 migrants in March, including nearly 19,000 unaccompanied minors, according to the agency. There are around 11 million illegal immigrants, including 1.2 million with court orders to leave the country, that reside in the U.S., the Post reported.

The Biden administration left the public health order, Title 42, in place and officials have used it to expel around 700,000 illegal migrants in the last 13 months, the Post reported. The procedure is not considered an official deportation or “removal” and is not recorded as one.

Since Biden took office, ICE officials have arrested around 2,500 individuals a month whereas officials made around 6,000 monthly arrests near the end of the Trump administration, the Post reported.