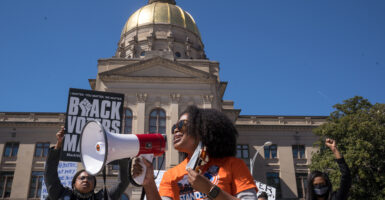 "It has become clear that even well-intentioned critics of the law simply have no idea what the law is," 21 black leaders say in an open letter. Pictured: Protesters rally March 8 outside the Capitol in Atlanta in opposition to Georgia's voting reforms. (Photo: Megan Varner/Getty Images)

“It has become clear that even well-intentioned critics of the law simply have no idea what the law is,” the black leaders write in the letter, adding:

It is clear they have no idea how favorably Georgia’s new law compares with most other states—including President Biden’s home state of Delaware. And it is clear they have no idea that a majority of black voters across the country support the key provision under attack by critics—the simple requirement that voters be able to identify themselves when voting. This is the same simple requirement needed to pick up baseball tickets or board a plane—activities hardly as important as voting.

The Senate Judiciary Committee is holding a hearing Tuesday titled “Jim Crow 2021: The Latest Assault on the Right to Vote.” Stacey Abrams, the Democrat who lost the last governor’s race in Georgia, is among those scheduled to testify against the state’s new voting law.

President Joe Biden—who represented Delaware in the U.S. Senate for 36 years—recently referred to the Georgia law as “Jim Crow in the 21st century.”

The Georgia law requires voters to present identification in submitting absentee ballots, such as a driver’s license number; codifies ballot drop boxes; and expands weekend voting. It slightly reduces the number of days for early voting from 19 to 17 and gives voters an earlier deadline to mail absentee ballots.

Signatories from Georgia include the Rev. Alveda King, niece of the Rev. Martin Luther King Jr. and head of Alveda King Ministries; Michael Lancaster, director of the Frederick Douglass Foundation; and Vernon Jones, who, like King, is a former Georgia state representative.

“They have tarred with the brush of racism people whose only sin is a desire for confidence in our elections,” the black leaders’ open letter says.

Their letter takes exception to mischaracterizations of the Georgia law, which they call a “proper, honest step in reforming the election process”:

To compare today’s policy differences with the literal life and death struggle of previous generations is to diminish those heroes’ struggle, sacrifice, and enormous accomplishments. It is past time for today’s generation to come together in an honest, civil, and straightforward way to protect these shared values of voter access and election integrity. It should be easy to vote and hard to cheat.

Jim Crow laws restricting voting required poll taxes or arbitrary “tests” for black voters before they could cast a ballot, including requiring them to guess accurately the number of jelly beans in a jar.

These overtly racist laws also restricted employment, housing, and educational opportunities for black Americans. The Jim Crow era included terrorist activity by the Ku Klux Klan, which committed violent and deadly acts such as lynchings against blacks, often with impunity.

The Center for Election Innovation and Research, a nonprofit that works with state elections officials, ranked Georgia as among 34 states in the “top tier” for voting access because it allows early voting and no-excuse absentee ballots, the Albany (Georgia) Herald newspaper reported Monday.

The letter from the black leaders goes on to say:

We, along with dozens of other black pastors and civic leaders in Georgia fully understand and support the state’s new election integrity law—a law that will help rebuild voter confidence, and make sure every vote counts.  Those who have been deceived by a political campaign to discredit the new law and punish the state of Georgia, should stop, take a step back, and understand the real agenda here.

After Georgia Gov. Brian Kemp signed the legislation into law, Major League Baseball and a growing number of major corporations voiced harsh criticism of the reforms.

The black leaders’ letter refers to other states that have experienced voter fraud.

“You need only look at recent election fraud cases in North Carolina and New Jersey to see how serious a problem our country could face if these vital protections become outlawed,” the letter says of the Georgia law. “There is no inherent conflict between making it easy to vote and hard to cheat.”

The New Jersey Attorney General’s Office has indicted local officials in Paterson, New Jersey, on charges of voter fraud stemming from a 2020 election. In North Carolina, the results of a U.S. House race in 2018 were thrown out after an investigation found voter fraud.

The black leaders’ letter concludes by arguing that the attacks on Georgia’s law are a means to push a bill known as HR 1 through Congress to nationalize elections, eliminate state voter ID laws, expand ballot harvesting, establish taxpayer-financed political campaigns, and put state bureaucracies in charge of draw congressional districts, rather than state legislatures.

The letter calls HR 1 a “sweeping power grab” and says:

Of course, all of this is being done under the guise of expanding voting access. The reality is it is an unprecedented attempt to take control of our elections and have taxpayers pay for political campaigns. Yes, tucked into the mammoth 800-page bill HR 1 is a little provision where taxpayers will be forced to subsidize the campaigns of the very politicians now supporting HR 1. What a massive conflict of interest.

Other signers were the Rev. Dean Nelson, a member of the Frederick Douglass Bicentennial Commission; syndicated columnist Star Parker, who is president of the Center for Urban Renewal and Education; Bishop Aubrey Shines, founder of Conservative Clergy of Color; and former Vanderbilt University law professor Carol Swain.