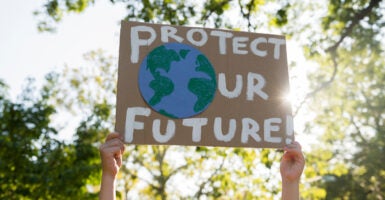 In 1990, PBS aired a 10-part documentary called "Race to Save the Planet" that featured 10 hours of radical leftists without any rebuttal. (Photo: Getty Images)

Beware arrogant liberal journalists besmirching the supposedly disgusting concept of bothsidesism, insisting truth and falsehood should never be aired together. The American people are too dim to figure out which side is which. The “false” side must be shunned.

The most fervent topic of this arrogance is global warming, and the so-called true side never has to be held accountable for its dire predictions, ever.

Take biologist Paul Ehrlich, who wrote the epic 1968 manifesto of error “The Population Bomb,” in which he predicted that “In the 1970s the world will undergo famines—hundreds of millions are going to start to death” from overpopulation. Wrong.

On May 4, 1989, Ehrlich warned of “rapid” climate change, that “we could expect to lose all of Florida, Washington D.C., and much of the Los Angeles Basin. … We’ll be in rising waters with no ark in sight.”

They repeated this disaster-movie routine on Jan. 11, 1990. Ehrlich claimed that when the ice sheet melts in Antarctica, the sea level would rise “not … 1 to 3 feet in a century but … 10 or 20 feet in a much shorter time.” He added: The Supreme Court would be flooded. You could tie your boat to the Washington Monument. And storm surges would make the Capitol unusable.”

Did any of this turn out to be true over the last 30 years? Ehrlich’s predictions aired without a second of a skeptical opinion. Was “truth” served and “falsehood” denied?

From Oct. 7-11 in 1990, PBS aired a 10-part documentary series called “Race to Save the Planet.” It was such an urgent “race” that it required 10 hours of radical leftists without any rebuttal. Narrator Meryl Streep warned: “By the year 2000—that’s less than 10 years away—the Earth’s climate will be warmer than it’s been in over 100,000 years. If we don’t do something, there’ll be enormous calamities in a very short time.”

Does anyone remember the “enormous calamities” experienced by the human race since then?

This point is hammered again in a new book by Marc Morano titled “Green Fraud: Why the Green New Deal Is Even Worse Than You Think.”

These days, the hype machine celebrates radicals such as Swedish teenager Greta Thunberg, who said: “We are in the beginning of a mass extinction, and all you can talk about is money and fairy tales of economic growth. How dare you!”

If you’re a “denier” of this prediction, then you’ll be mocked by Time magazine, who made this teen its person of the year in 2019, oozing that she “repeats the unassailable science” and “in summoning the courage to speak truth to power, became the icon of a generation.”

Morano concludes his book by warning that Republicans can’t try to meet this media freight train by trying to compromise. “If they don’t go after the scientific premises, the GOP is left arguing the Green New Deal is too expensive,” he says. And if we’re risking “mass extinction,” how will that sound?

The Green New Deal is more of the same radical agenda to lock down (if not abolish) capitalism, like a never-ending COVID-19 scare. The left never really relies on the scientific method on this subject. It only intimidates its opponents into silence and crushes any whisper of televised debate. It relies on the same media that always found creeping authoritarianism under former President Donald Trump. It should look in the mirror.