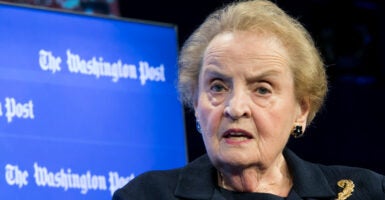 Madeleine Albright—seen here in an interview at The Washington Post in May 2018—and two other former U.S. ambassadors to the United Nations are wrong when they say that the Trump administration "downgraded U.S. engagement at the U.N.” (Photo: Kristoffer Tripplaar/ Washington Post/Getty Images)

In an article Monday in Foreign Policy magazine, former U.N. Ambassadors Madeleine Albright, John Negroponte, and Thomas Pickering call for the U.S. to pay its arrears to the United Nations to “regain credibility and moral authority.”

But the article is misleading in places and wrong in its assumptions.

Misleadingly, the trio write, “When the Trump administration downgraded U.S. engagement at the U.N., China stepped up, assuming leadership at four of 15 U.N. agencies.”

In truth, former President Donald Trump inherited that situation. The first Chinese national to lead a U.N. specialized agency was Margaret Chan at the World Health Organization in 2007. She left office at the end of her second term in July 2017.

In other words, Chinese nationals led four U.N. specialized agencies in 2015 and 2016—before Trump became president.

China has been asserting its influence in the U.N. system with increasing speed and scope for nearly two decades. Trump is not the cause of this trend, and it’s wrong to imply that he was.

In fact, although not every action of his with respect to the United Nations was well-considered, Trump deserves credit for recognizing the problem and acting to counter Chinese influence.

The former ambassadors harp on the fact that China can call the U.S. the “largest debtor” to the U.N. while bragging that it pays its bills on time. To the extent that that message resonates, it’s a failure of the U.S. to communicate its position or to rebut the Chinese assertion.

According to the U.N. Chief Executives Board, even with its arrears, the U.S. provided more than $11 billion to the U.N. system in 2019. China provided $1.7 billion.

How poorly are our diplomats publicizing America’s generosity when China earns more gratitude for providing one-seventh the amount of what the American taxpayer provides?

But it is on the issue of paying arrears that the article does the reader a particular disservice.

Reading the article, one would be at a loss to understand why the U.S. would withhold funding from the United Nations. In fact, Albright, Negroponte, and Pickering elide the fact that the U.S. withheld funding during their tenures at the U.N.

Why would these ambassadors work for U.S. administrations that would do something that they regard as so counterproductive?

Because it is not always counterproductive.

The U.S. withholds funding for specific reasons—to advance reforms, improve accountability, and oppose objectionable practices, among others. Few countries share U.S. concerns on these matters and withholding can leverage reform or at least signal objection to policies.

For instance, the U.N. would not have had an inspector general equivalent absent U.S. withholding. The U.N. created the Office of Oversight Services in direct response to U.S. withholding of funds.

In the case of assessments, the U.S. has, since the founding of the United Nations, objected to excessively relying on a single member state for the U.N. budget and argued for establishing a maximum assessment level and, subsequently, lowering that maximum.

Under President Bill Clinton, the U.S. capped its U.N. peacekeeping payments at 25% and began accruing arrears equivalent to the difference between that 25% and the 30+% that the U.N. charged the U.S. That led to a U.N. financial crisis in the late 1990s.

Contrary to the article, the U.S. didn’t just come to its senses in 1999 and begin “repaying the world what it owed.” Under legislation co-sponsored by then-Sens. Jesse Helms and Joe Biden, the U.S. used the financial leverage of its arrears to secure reforms by making payment of nearly $1 billion in arrears contingent on adoption of reforms sought by the U.S.

Twenty-one years later, the U.S. assessment has still not fallen to 25%.

The Trump administration enforced the cap to demonstrate U.S. desire to establish a maximum peacekeeping assessment. Arrears have mounted, and the U.N. is again feeling the pinch.

The U.N. General Assembly will adopt a new scale of assessments this fall. As with Helms-Biden, the U.S. has financial leverage. Albright, Negroponte, and Pickering would squander that leverage for the mirage of goodwill.

That goodwill won’t materialize. The United Nations is a place of hard-nosed politics. Other governments will not thank us for paying what they see as our obligation. How do we know? The U.S. paid arrears under President Barack Obama, but it yielded little gratitude. The U.S. still had to fight tooth and nail to get even minor reforms.

History shows that financial leverage can help the U.S. secure reforms. If they’re smart, the administration of now-President Biden and Congress will not squander the leverage provided by U.S. arrears.

Instead of paying and hoping for fleeting gratitude, the U.S. should make payment of U.S. peacekeeping arrears contingent on a maximum assessment of 25% and other overdue reforms.